When Modi Comes to Zion 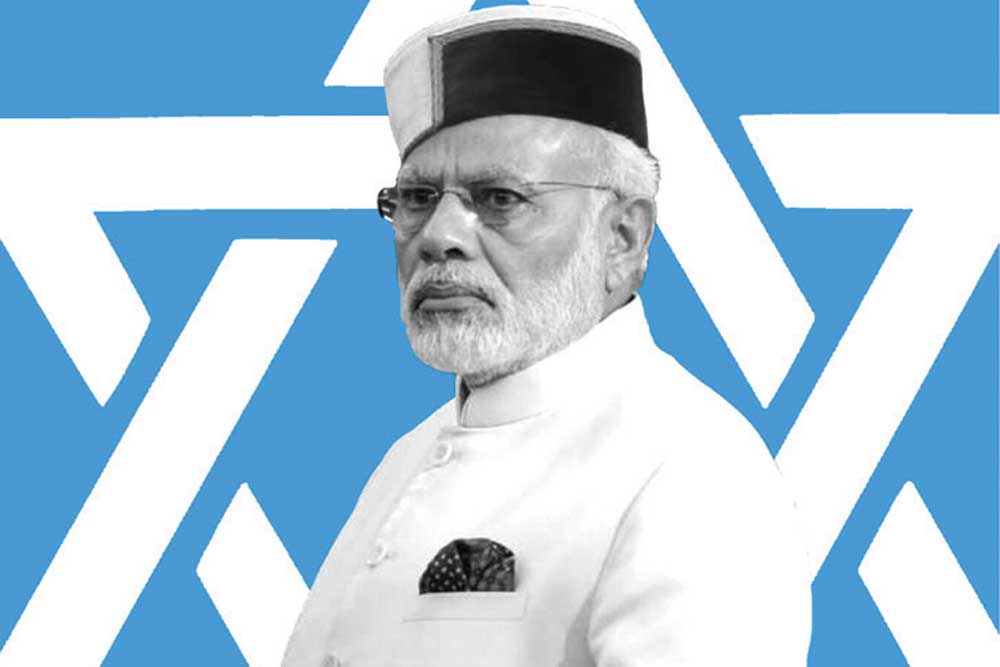 IN THE LAND of Israel, it’s always been a struggle between the cruellest paradoxes of history and the sacred legitimacy of memory. As the sun sets on Mount Zion, take a walk through the cobblestoned paths of old Jerusalem, where the divided communities of Jews, Christians, Armenians and Arabs live in a controlled bustle, and you can’t miss the tension as ancient as gods and gospels. It’s here, in the glow of the candles lit by the faithful from across the world in the Church of the Holy Sepulchre, you see the last remains of the crucifixion. And it’s here, at the Western Wall, or the Wailing Wall, you in your mandatory skullcap whisper your prayers to the rock, insert the folded papers of your wishes and grievances into the crevice. The wind from Zion takes you to the rustle of a Biblical age. Elsewhere, someone with a knife or a stone is biding his time, waiting for his chance to update the story of sacrifices and salvation to suit the bloody present. In Israel, no ordeal is as permanent as the quest for acceptance in a land burdened by the curses and blessings of the past.

Invariably, this Israel continues to be denied recognition in headlines, especially in these parts of the world. It’s into this Israel that Narendra Modi has come to embrace history. His greatest achievement in Israel is his deference and defiance: he has shown the humility of a pilgrim and the gravitas of a statesman. The first Indian prime ministerial visit to Israel earned the adjective ‘historic’ not for the bilateral treaties signed by the two countries, but for Modi’s realisation that what binds the guest and the host is a heightened sense of the nation. It is politics powered by civilisational memories and nationalist challenges that make Israel and India partners in a world where the cult of alienation denies legitimate nations their right to exist.

What a relief, Modi gave the symbolism of Third World vintage the go-by. There was no stopover in Ramallah in the West Bank, the administrative headquarters of the Palestinian Authority. There was no visit to the mausoleum of Yasser Arafat, the stateless statesman who once swayed the conscience of Third World India. He was the Dalai Lama of the Arab world without the grace of Buddhism, and his empty holster told a different kind of freedom story. A section of India still loves that story. The big, bearded man in his patterned keffiyeh in that story is an abiding image of victimhood, a wandering symbol of brutalised homelessness. And there is always Mahmoud Darwish to provide us with the finest lyrics to complement our angst. By de-hyphenating his visit to Israel, Modi has taken India out of the redundant sentimentalism of the Palestinian cause.

By so doing, Modi joins Israel in realising that the Palestinian struggle today is more Islamic than nationalistic. The intifada kid in the Gaza Strip has become, by strange variations of history, a blood brother of the knife-wielding executioner in a balaclava elsewhere in the sandy remoteness of Syria. An independent, ‘Islamic’ Palestinian state is not something that Israel alone will dread to live with, for the idea of an Islamic state today is the most fundamental form of unfreedom. For the old romantics of the Palestinian struggle, it is an unpalatable reality. In this visit, Modi has broken free from the comforting clichés and platitudes that marked India’s engagement with the Middle East.

Israel is a place where an Indian leader can come face to face with the politics of being alive in historical adversities. Traditionally, solidarity with the Palestinian cause demanded the total exclusion of the other. In its crudest form, Israel’s own victimhood has been trivialised as an ultra-nationalist excuse for repression. The Palestinian romantics called it ‘ Holocaust blackmail’. The tragedy of the Jew is too singular to be banalised in the comparative narrative of persecution and victimisation. By reaching out, Modi has shown that India is, at last, willing to establish an emotional covenant with its true partner in the Levant. For too long did we pursue the ‘correct’ policies of de-colonisation politics, no matter it was history-proof.

The existential anxieties of Israel, a lone nation in a neighbourhood that sees it as a dehumanising lie of history, are genuine. The popular image of the settler-occupier only reinforces the prejudices and pathologies that come into play whenever the Jewish question arises. The best arguments about Israel are still provided by Israelis themselves, from the novelist Amos Oz to the journalist Ari Shavit, not left-liberals fed on Edward Said. Modi, as a visitor from another great civilisation who knows what it takes to navigate the cultural tensions of the present, has brought India closer to the Zion of the mind. A historical necessity.