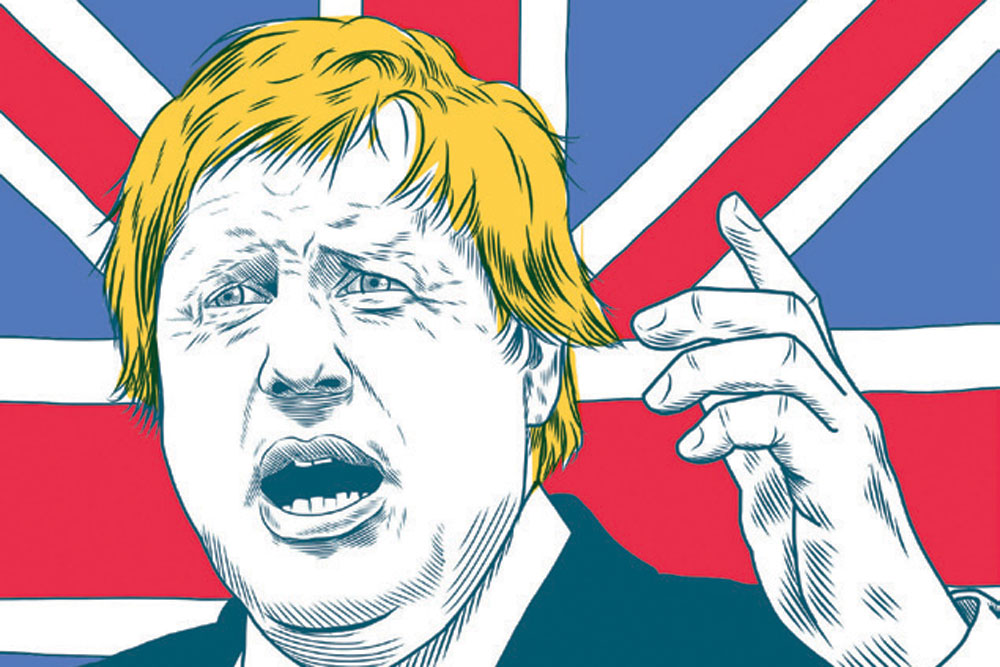 
IF YOU READ only certain kinds of opinion writers in certain kinds of opinion pages, on both sides of the Atlantic, Boris Johnson is an ahistorical calamity— laugh with the “rascal” only to be damned. It’s not a people’s vote, the original referendum on Britain’s continuance in the European Union, that has made him the new prime minister of the UK. This “man without conviction for a country without direction” has “lied, pandered and guffawed his dishevelled way to the highest office in the land.” The new Conservative leader, “whose laziness is proverbial and opportunism legendary, is a man well practiced in deceit, a pander willing to tickle the prejudices of his audiences for easy gain. His personal life is incontinent, his public record inconsequential.” “This is the Johnsonian way. The lies, the performative phrases, the layers of persona—they accrete, one on top of another, flecked here and there with Latin, until everyone has forgotten what the big deal was.” These are random quotes from the lofty pages of journalism. As you read more of them, you realise: increasingly, the Boris-bashing commentators in their word play look like poor parodies of their subject, one of Britain’s highest paid columnists. Since that vote three summers ago, Johnson, who along with Michael Gove (the would-be Brutus) formed the vanguard of the Leave campaign, has been ridiculed (by pundits from Left and Right) and admired (by the English who lived outside the London bubble) in unequal measure.

I remember that summer in London, when the city, a cosmopolitan oasis, was stunned by the worst kind of English eccentricity. London was history-proof, immune to the paranoia of the Little-England pastoralists, and steeped in its multicultural self- righteousness. Elsewhere, beyond the city that was appalled by the politics of the countryside and the rusty Brahminism of blue-blooded Tories, a new sense of Englishness prevailed over enforced supra-nationalism. Some, condescendingly, called it the return of nativism; some saw it as the imperial fantasy of the islander; and some shrugged it off as the politics of fear. On Liberation Day, there was no national celebration. In a divided Kingdom, the alarmists dismissed the preference of the majority as manipulated emotionalism. It was, in a sense, the death of politics itself—the politics of comfortable truisms. The resentment from below would topple the Establishment; Who-we-are would defeat Just-be-what-you-are. Johnson should have been the natural successor to David Cameron, who then resembled Gorbachev in the final days of the Soviet Union—a man who presided over the freedom rite, and paved the way for his own redundancy. In the end, Coronation Day became Funeral Day. But Boris Johnson didn’t die. He has been resurrected as a caricature. He was what others wrote about him. He was not what he was: Eton, Oxford, editor, scholar, columnist, author, two-time London mayor, foreign secretary, and Britain’s most popular politician. He was reduced to a series of one-liners. He was the idea on which his detractors—jealous journalists and ignored grandees—tested their capacity for hatred.

The so-called Anyone-but-Boris campaign was yet another instance of straitjacketing a social upheaval. When Brexit was followed by Donald Trump, it was the appearance that jolted the liberals and sober conservatives alike; the attitude of a people who elected the man got little attention. A Trump could not have played out his salvation theology without the backdrop of the ruins of both the traditional Left and the Right. It was the revenge of the abandoned. Between a preachy, platitudinous Left and a privileged, pompous Right lay the vast constituency of the resenting class, waiting for a redeemer, no matter if he was a vulgarian or a buffoon. The new narrative of liberal dissent, sprinkled with the acquired jargon of post-truth and fake news, refused to engage with the raw, elemental rage of the abandoned class. It doesn’t, still. It’s still lost in the ungainly aesthetics of power, whether in Washington or London. Aesthetics matters, as this column has argued earlier in these pages. A political royalty that disrespects popular sentiment matters more. The Boris moment marks a widening rift between reimagined Englishness and insensitive globalism.

Can Boris Johnson be the unifier? As I went back to his book-length appreciation of his hero, Winston Churchill, one passage by the fan boy stood out:

“I have always thought that an alien looking cursorily at this planet might conclude that we human beings are not strictly speaking individuals, but all really part of the same organism: like leaves connected by invisible twigs and branches.”

These are not a buffoon’s words. These are the words of a man who believes in the shared humanity of his world. Boris Johnson won’t be an ephemeral prime minister but a worthy inheritor of Churchill’s ideals if he can turn that philosophical lyricism into political pragmatism.