Greeks, Dukes And the Art of a Perfect Diet

The problem we face today in India and many other parts of the world is that we straddle two conflicting ways of thinking about the relationship between health, food and taste 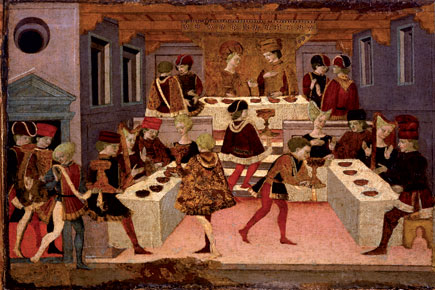 At the courts of the Duke of Burgundy and the court of Edward IV, six physicians were usually in attendance at the dining table. Their presence was necessary not simply because of the ever-present threat of poisoning but because of their skill in distinguishing between food combinations that would be beneficial and those that could be harmful to their patron.

We have all heard the adage: you are what you eat. More precisely, you are what is produced in your body from what you eat. The question is, what determines whether the effect produced by the food you have eaten is beneficial or harmful to you? It is in search of an answer to this question that ancient and medieval doctors found themselves in the kitchen, and cooks in laboratories. The two professions were forced to collaborate in order to discover the science and art of a perfect diet for a king, a nizam, a count, and a pope. Closer home, hakims were prized for their knowledge of what specific combinations of vegetables, meats and herbs would produce in the body of a specific person. A far cry from today’s world where the two occupy different domains.

“He who would safeguard health must know three things about food,” said Aldobrandino da Siena, a great physician of the 13th century. “Firstly, the ‘complexion’ and nature of all foods and of the person who eats them; secondly, the quantity of each foodstuff that is safe to eat; thirdly, what foods are customarily consumed.”

What is this complexion that Aldobrandino speaks of? “We must know that all [food] are warm and moist, warm and dry, cold and moist or cold and dry, and you must know that such are the complexions of those who are to receive them: sanguine, choleric, phlegmatic and melancholy.” To maintain good natural health, “the proper foods must be given according [to] the natural temperament of the person eating it”.

Aldobrandino’s notions stemmed from the belief that all matter in the universe is made of earth, water, fire and air. Everything that exists in the universe exists in our body, which comprises humours—bodily fluids that need to be kept in equilibrium. The process of digestion created these humours in an individual, who, it was believed, had a predisposition towards one or the other of these. A sanguine temperament combines warmth and moistness and is the essence of the air; the choleric temperament is a mixture of warmth and dryness, and is embodied by fire; phlegmatic persons are cold and moist, as is water; and the melancholic temperament combines coldness and dryness, the qualities of earth.

Pinpointing an individual’s humour from the urine and temperament was, as you can guess, an inexact science. Nevertheless, these views permeated the ancient and medieval worlds through the Greco-Arabic system of medicine that can be traced back to the Greek physician Hippocrates, and to Ayurveda (drawn from the passages of the Rig Veda, which also specified a fifth element, ether). The strong similarities between Hippocratic and Ayurvedic medicines have evoked theories of an exchange of ideas between the ancient Greeks and Indians, but with little to substantiate or disprove them.

According to the Greco-Arabic system (compiled by Marcus Aurelius’ court physician, Galen, in 130 CE and translated into Arabic by the Persian physician, Avicenna, in the 11th century), an individual maintained health so long as the humours, bodily fluids, remain in a state of equilibrium within the body. Sickness started by distemperament, when the bodily fluids are imbalanced in quality and quantity. The malign effects could be reduced by the consumption of an appropriate food cooked in an appropriate manner, and by practising moderation.

The system, therefore, categorised each type of food according to its humoral quality and a science developed through the collaboration between cooks and physicians, on how balance could be induced in the food by means of the cooking method. Beef (moist) was roasted (dry) or fish (cool and moist) was usually fried. ‘A camelin sauce based on cinnamon and vinegar brought a warming and drying effect to moist baked salmon or trout,’ writes Roy Strong in Feast. ‘A green sauce made of parsley (warm and dry) was regarded appropriate for a cold and moist pike or turbot.’

The ancient and medieval worlds saw diet primarily as a means of preventing and curing illness. The doctor was usually at the helm, but sometimes the cook was such a sublime blend of artist and scientist that his diktat prevailed. Marie-Antoine Carême was one such man—chef to Talleyrand, George IV and the Tsar of Russia. Here is a description by Lady Morgan of a dinner (prepared by Carême) served at the chateau of Baron de Rothschild: ‘Distillations of the most delicate viands, extracted in ‘silver dews’ with chemical precision, on tepid clouds of rising steam, formed the fond of all. Every meat presented its own natural aroma; every vegetable its own shade of verdure.’

One could be sick but still enjoy tasty food that helped one correct the imbalance. Here is a menu designed by Maistre Chiquart for a feast given by his master, the first duke of Savoy where attention was paid to those afflicted with maladies. ‘And first a restorative, a recise, an almond butter, stuffed crayfish, a green purée of spinach prepared in two manners, quinces in pastry also in two manners, a couleys, pears cooked without touching coals or water, a plumeus of apples, a blancmange from capons, another blancmange from partridge, oatmeal, chickpeas, semolina, barley.’

This is not the insipid fare one associates with a patient’s dinner in a modern-day hospital where gastronomy and diet are more akin to antonyms than synonyms. This is because modern medicine perceives the human body in a different way—in a mechanistic fashion as individual organs and symptoms. The modern-day doctor sees the body as an aggregate of spare parts assembled partly by heredity and partly by environment, and sickness as being dependent on whether the assembling is good or bad. Not surprisingly, this has had an impact on the relationship between healthy diets and taste, and the (usually) mutually exclusive roles assigned to doctors and cooks. This has resulted in a plethora of diets that are neither tasty nor even healthy. For instance, the new Atkins Diet promises rapid weight loss without having to eat less—avoid carbohydrates but eat all the meat and cheese you want. For every physician who points out the negative impact of such a diet on the liver and kidneys, and a dieter who complains of bad breath and headaches, you have those who say that these conjectures have not been proven.

The mechanistic notion of the human body is far from being a satisfactory replacement for the equilibrium model of humoral theory, which was discredited in the 17th century with the discovery of the circulation of blood and its role in the human body. Fortunately for us, we live in the East, where our cuisine and religious diktats are deeply influenced by Unani (Greek) and Ayurvedic medicinal systems. The first Unani hospital and teaching centre in Hyderabad was established by the founder, Mohammed Quli (1580–1612). He and his successors, and subsequently the Nizams of the Asaf Jahi dynasty continued to employ hakims (Unani doctors) who wrote treatises such as The Balance of Temperaments and the Zubdat ul Hikam, which draws from Avicenna to describe foods and their properties.

Hyderabadi cuisine continues to follow these precepts. Delphine Roger in Food Practices and Traditional Medicine among the Muslims of Hyderabad, highlights some of the temperaments of these foods. Curd, for instance, is considered cold food even when served boiling hot, and ginger is hot food even as an ice-cream. Red meat and mangoes are hot; milk and melons are cold; fish is not to be mixed with curd (supposed to cause cholera); and sweet is to be associated with a sour dish to balance a meal. To avoid skin disease, tamarind flavoured dishes were supposed to be cooked only in earthenware pots, while copper or silver utensils had to be used for other dishes. The menu also changed according to the season and geography. Cold food was prescribed for the summer (curd, onions, mango and sour dishes), and hot food in the winter (toovar dal, biryani, meat and halwa sohan). No curd or greens in the monsoon, but definitely plenty of sour food.

The problem we face today in India and many other parts of the world is that we straddle two conflicting ways of thinking about the relationship between health, food and taste. We have grown up on food prepared by our mothers and grandmothers who use the notion of equilibrium while constructing the spice mix for a dish. Here is my grandmother’s recipe for curry powder that one uses for dry vegetables like plantain or okra. Roast five red chillies with two teaspoons of coriander seeds and one teaspoon of Bengal gram dal in two teaspoons of oil, and powder the ingredients.

But many of us also inhabit a world of sedentary lifestyles in front of computers or in meetings, long hours at work and a ‘restaurant and fast food culture’ whose ethos is more about shaking up the system rather than creating an equilibrium. It makes one yearn for a return to the era when the doctor and the chef together harmonised the relationship between food, diet and taste.