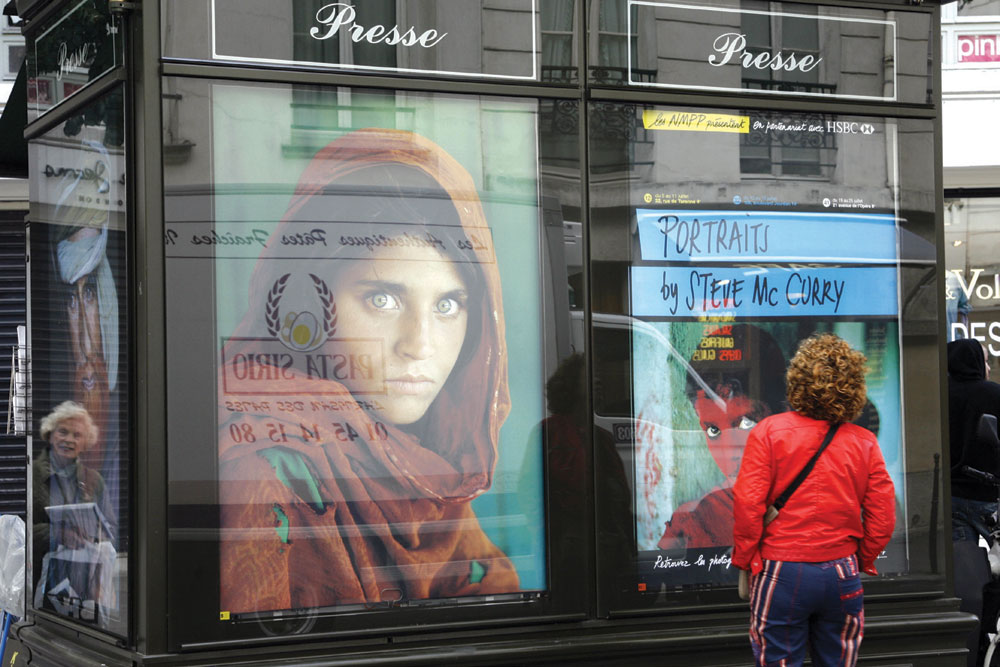 OVER THE PAST few weeks, photographer Steve Mc Curry has received a good deal of flak. Best known for his iconic portrait of the Afghan girl published on the cover of National Geographic in 1985, he is a member of the acclaimed Magnum cooperative. His work has a crossover appeal, belonging as much to ‘photojournalism’ as to art galleries and books, though ‘visual storytelling’ is how he likes to describe his practice. This self- description allows him the leeway to be more adventurous with his medium, with the result that his photographs often tend to be dramatic and exaggerated.

In March, writer-photographer Teju Cole panned McCurry’s work in The New York Times magazine for being ‘astonishingly boring’. Comparing McCurry’s images of India with that of photographer Raghubir Singh’s, Cole noted the use of a certain ‘compositional cliché’ in the former’s idiom. He was especially irked by McCurry’s propensity to depict Indian life ‘from the perspective of a permanent anthropological past,’ which leads him ‘to settle on a notion of authenticity that edits out the present day’. This practice, Cole claimed, amounts to not simply presenting ‘an alternative truth,’ but something quite spurious. It becomes an exercise in indulging in ‘fantasy’ and perpetuating age-old prejudices about India. I cannot agree more with this point of view.

However, recently, a more pernicious intent was ascribed to McCurry during a retrospective of his work in Italy. One of the prints at this exhibition, capturing a street scene in Cuba, was found to have been botched up by inept digital editing, most probably using Photoshop, the software that is the answer to even the most minute blemishes on a photograph. In a glaring oversight, a part of a signpost on a sidewalk had been cloned onto a man’s foot. Paolo Viglione, also a photographer, who had noticed this anomaly, went on to investigate more of McCurry’s work closely and discovered that a good many of them had been altered digitally, and rather carelessly at that.

In a photo of a group of children playing football, for instance, a boy had been excised from the frame entirely, while another had an arm added onto him. The internet was soon flooded with more such examples of manipulation. Soon enough, McCurry issued an apology. ‘I try to be as involved as much as I can in reviewing and supervising the printing of my work, but many times the prints are printed and shipped when I am away,’ he said to PetaPixel, a blog about photography. ‘It goes without saying that what happened with this image was a mistake for which I have to take responsibility.’

It is not clear if McCurry referred to the shoddy editing by his studio technicians, or to the actual practice of editing images, as ‘a mistake’. However, the huge wave of criticism directed at him since this exposé has focused largely on the legitimacy, or the lack thereof, of manipulating ‘reality’ for aesthetic ends. While such accusations may seem entirely kosher under the circumstances, they should by no means be levelled at McCurry alone. For the practice of editing images, ranging from mild touch-ups to severe morphing, has now become ubiquitous, if not inescapable.

Since its inception, photography has been subjected to various forms of editing, as much as any other creative medium. Whereas in other media, such as reportage, the creator has more control over the extent of editing, in photography the licence to tweak the material is limited. A classic illustration of this dichotomy would be war journalism. While a journalist reporting from the front may have much more liberty to revise, rephrase or reimagine a scene of destruction to effectively conjure up an image in words, a photographer has to capture a visual document in an instant, and say everything he or she intended in that moment. A newspaper report may lead up to a moment of truth, but a photograph can only hope to show a momentary truth, if at all, with the before and after of what it captures remaining forever elusive to the viewer. We find it easier to accept that words can, at best, approximate reality; but photography, we tend to assume, is the ultimate arbiter of mimesis.

Such is hardly the case. Even the legendary Robert Capa’s famous photograph, Falling Soldier, which captured the instant when a Republican fighter was shot dead in the Spanish Civil War, is believed to have been staged. Assuming that such a belief is correct, does it misrepresent reality? Yes, it does. Yet, it also conveys the truth of the pity of war, which may have been the photographer’s intention all along, and thus perhaps does not qualify as blatant falsehood.

Photography has been subject to such forms of manipulation for long. As early as the 19th century, Felice Beato, who became renowned for his documentation of the devastation of the Revolt of 1857, was believed to have tinkered with some of his arrangements to get the best effect. In portrait photography, the finer details of the positioning and draping the subject, setting up of the props and the backdrop, or getting the desired tone of sepia in the development of the print are all integral to the process of editing, in the widest sense of the term. In another time, professional portrait painters had to ensure that they captured the most flattering aspect of their subjects even though that involved using techniques akin to a version of modern-day Photoshop.

At its most fundamental, the act of editing begins with the choice of the frame itself: with the photographer’s decision to capture a slice of life, from a specific angle, and leave out the rest. In spite of its grand illusion of freezing reality into a moment, a photograph can only hope to capture a simulacrum of the real, no more—if at all. With sophisticated technology available to us so easily, everything can be modulated to the finest detail. From the intensity of the light to that of the colours to the mood-appropriate texture, Photoshop allows us to change virtually every part of a composition to our satisfaction. For the less tech-savvy, there is basic editing software on smartphones that will remove the wrinkles from our selfies or filters on Instagram will heighten the appeal or quality of an image before it is sent out into the public domain in pursuit of hearts and followers.

Even a news agency like Associated Press, whose task is to report an unvarnished version of the reality, for lack of a better word, has strict guidelines about editing images—which is to admit that almost nothing that we see on a news portal is not subjected to some form of alteration. The crux of the matter lies in the extent of the intervention made to an image in the process of it being printed, especially if there are any qualitative changes made to its content. From the few ‘before and after’ case studies of McCurry’s images, it is apparent that not much of the content in most of these photographs was distorted in any meaningful or obviously significant way.

In that case, are the objections raised at McCurry’s photographs unwarranted? Not quite. If you set aside the aesthetic evaluation of his work and focus entirely on the content of it, there is reason perhaps to be alarmed, if not outraged. A large part of McCurry’s oeuvre is in circulation on mainstream media and the images as such are treated as journalistic records. Given their mode of dissemination, his photographs are more likely to be subjected to a certain yardstick of expectations from the public, though it is more sensible perhaps to come to terms with the only truth that photography can ever tell us: never trust what you see.