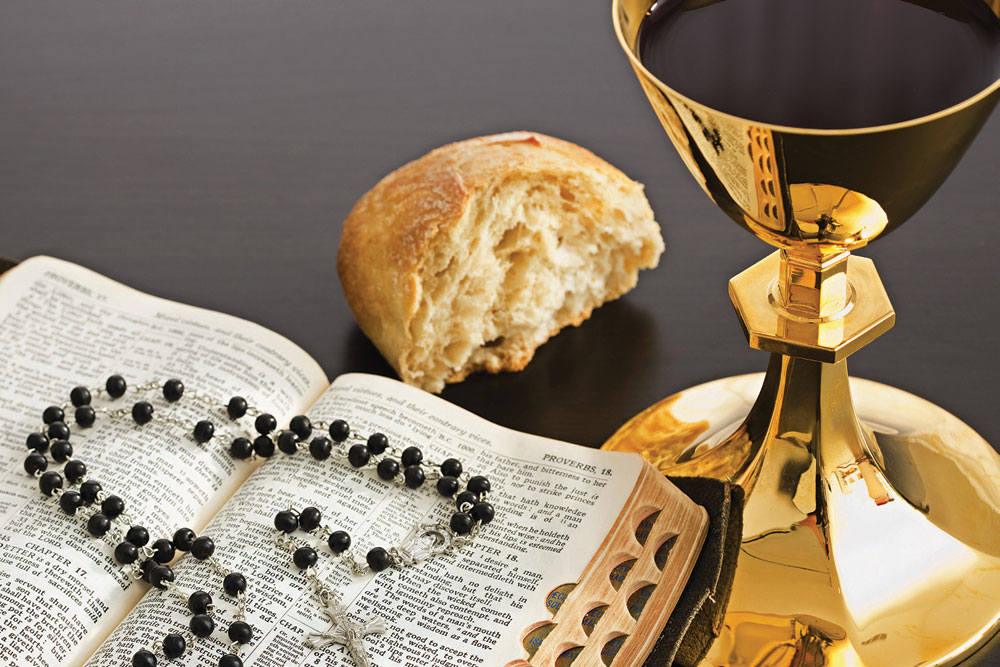 FOOD ESTABLISHES the connection between mind and body, between the spiritual and the physical. We search for the elements and dishes—fruits and nuts and vegetables and lentils and meats and seafood— that will provide nutrients and create the perfect body and soul within each one of us. Is a perfect body necessary for achieving a perfect soul? What is the relationship between food and creating a perfect individual? Historically, this question has plagued religions, evoking unruly debates, and creating schisms, factions and sects. It is also a question that we are constantly trying to answer in a world of visual media, diets and spirituality.

Let us begin with answers to the above questions in the worlds inhabited by religions. The early Vedic tradition links the concept of perfection integrally with food. Food is identified as the firstborn of ñta, the active power of truth, which underlies all cosmic, divine and human action. Food, as Carlos Lopez highlights in Food and Immortality in the Veda: A Gastronomic Theology? is understood as the immortality-granting agent because of its primary, filial relationship to ñta. The firstborn of ñta (annam, food) existed before the gods and before creation, and is the prerequisite not only for the living cosmos but also for heavenly life. It is by means of food that immortality (in heaven) is achieved.

In the Chandogya Upanishad (vaguely dated as having taken shape in the middle of the first millennium BCE), which attempts to identify esoteric patterns in sacrificial practice and to forge from these a unified understanding of the cosmos, the self and the nature of being, one pattern that is worked out is about existence. All existence, as Bruce Lincoln points out in his study of the book, is said to be composed of three basic qualities or elements—brilliance (tejas), water (spas) and food (annam). Speech is the essence of brilliance, breath the essence of water (life-sustaining fluid), and mind the essence of food (life-sustaining solid matter).

The Vedic poets understood life and society in terms of the struggle to acquire food. Food itself becomes the most basic conceptual tool by which the functioning of the human being, society and the cosmos are understood. Food, as Wilhelm Rau and later Brian Smith point out, is also the vehicle through which the notion of power is discussed. The Vedas conceptualise existence in terms of eating —the eater and the eaten. The social hierarchy is presented as a cosmic food chain where the higher classes are the eaters and the lower ones, the food. Food is the link to the gods and to ancestors—one feeds the gods (who ingest through smelling the food), and one also feeds one’s forefathers through the offering (devasam).

Hell (the realm of nirrti) in the Vedic paradigm is an endless pit without light, a cold place of silence, and a place where one cannot receive the offerings of the descendants. In one story, the vision of ‘hell’ as a place where food is unavailable is further developed through the idea of a ‘reverse world’ or an ‘inverted food chain’. It is about inverting the power structure—where the powerful become the slaves, and the weak, the rulers. The eater becomes the eaten, and the eaten becomes the eater.

The answers to these questions lead us along different routes within religions. Patrick Olivelle points out an interesting dichotomy within Indian religious traditions regarding the perfect individual. The extent to which one has freed oneself from food was also often viewed as an indicator in the advance in holiness. For the perfect individual in the early Vedic paradigm, s/he is a person for whom everything is food, while in the later paradigm, s/he is a person who does not need and is therefore beyond the realm of food. This is most evident in the debate in Jainism between Digambaras and the Svetambaras on the relationship between a liberated (and hence perfect?) individual’s (especially a Tirthankara’s) relationship with food. Svetambaras think that a liberated individual can experience hunger, and there is nothing about eating and hunger that is fundamentally at variance with the attainment of omniscience. Not so, say the Digambara, for whom a perfect being like the Tirthankara cannot feel hunger—and this is taken to a logical end in the practice of santhara, fasting unto death. By not eating, one can break the link to the physical world.

A similar debate is evident in Christianity, which has no binding rules on food. The Bible begins with food. ‘Behold, I have given you every plant yielding seed that is on the face of all the earth, and every tree with seed in its fruit. You shall have them for food.’ Adam and Eve were supposed to be vegetarians with the the fruit of the Tree of the Knowledge of Good and Evil being the only exception. We all know what happens next with Eve and Adam.

After the Flood, the Lord tells Noah, “Every moving thing that lives shall be food for you. And as I gave you the green plants, I give you everything. But you shall not eat flesh with its life, that is, its blood.”

This directive sets the Gentiles apart from the Israelites whose Old Testament has stern prescriptions about what one ought to eat, what ought to be shunned, what can be cooked and eaten together, and what ought to be cooked separately (such as meat and dairy items), the correct method of slaughter, and so on. In this, they do not differ much from Muslims. ‘Eat and drink, but be not excessive. Indeed, He likes not those who commit excess,’ says the Qur’an. ‘Eat from the good things with which We have provided you and do not transgress [or oppress others] therein, lest My anger should descend upon you. And he upon whom My anger descends has certainly fallen.’

In contrast, the New Testament has no forbidden foods, nor is drinking taboo, nor is there the idea that any foods are unclean. Part of the ritual in a church involves the spiritual eating of the flesh and blood. Christ, the perfect individual, who on the cross is starved of food and water, tells his disciples: “Unless you eat the flesh of the Son of Man and drink His blood, you have no life in you. Whoever eats My flesh and drinks My blood has eternal life, and I will raise him up at the last day. For My flesh is food indeed, and My blood is drink indeed. He who eats My flesh and drinks My blood abides in Me, and I in him…whoever feeds on Me, he also will live because of Me.” Meals create a fellowship around the table and play a significant role in the accounts of Jesus—the most famous example is of course the Last Supper. Another passage in the Bible says: “Don’t you see that nothing that enters a person from the outside can defile them? For it doesn’t go into their heart but into their stomach, and then out of the body.” The dining hall is always near the church because man should live on sacred scripture and bread. Unleavened bread, for Catholics, corresponds to the sacrament of the Eucharist.

The relationship between food and attaining perfection continues to bedevil modern-day existence. Should we be eaters rather than the eaten, or can we escape being eaten by not eating at all? Take, for instance, a definition of perfection in today’s visual media—a perfect individual is synonymous with a slim body. Airbrushed photos, impossibly slender waists and waif-like models populate magazine, television and internet spaces. Those with more ‘normal’ physiques engage in an endless struggle through eating less and even starving on some days, and becoming dietoholics coupled with rigorous exercise in the gyms. ‘Lose weight, don’t wait’ is the sign on many an autorickshaw.

The logics underlying the early Vedic and the Digambara paradigms are corrupted in the modern-day definition of perfection. Eating less through dieting—is that a subliminal way of saying that one does not want to be eaten, that one wants to be powerful? If so, by eating less, or through bouts of starvation, we seem to be trying to achieve the ‘eater’ status, the more powerful status of the early Vedic paradigm? These diets of starvation are not about escaping the link to the physical (as in the Digambara paradigm) but are about achieving power through a perfect body. A contrasting present-day definition of a perfect individual is anchored in achieving a balance between the body and the spirit—think yoga and ayurvedic diets. Here, the early Vedic paradigm is more evident. In both definitions, forging food’s connection with the notion of perfection requires struggle and perseverance. Why do we make something that could be utterly enjoyable so torturous? Why not let go? We may then be able to create a tuneful connection between body and soul and have a splendidly inhabited existence.