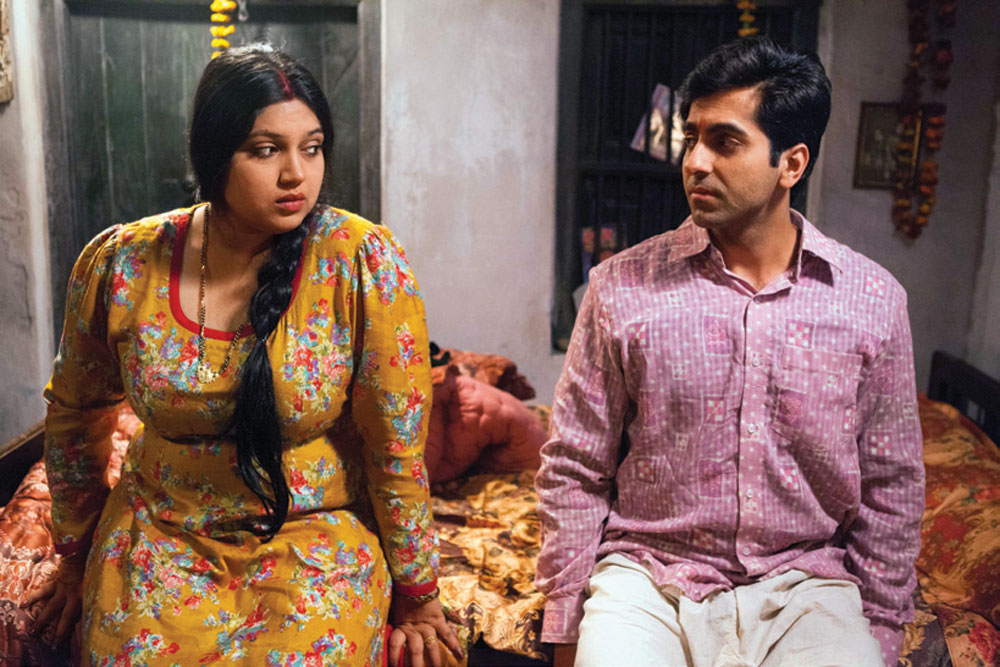 ‘MIDDLEBROW’ IS A putdown, a term deployed by cultural snobs, but it can be used usefully rather than pejoratively to look at the often ignored middle ground of Hindi cinema which lies somewhere between the highbrow art cinema and the lowbrow masala film.

Middlebrow means cultural forms that feature some or all of the following traits: commercial, emotional, earnest, aimed at self-improvement and learning. It often manifests aspiration and auto-didacticism, and pops up in those tedious lists of things to do (often adding, unnecessarily, ‘before you die’), or ‘top tens’. Cultural and literary festivals are also mostly middlebrow, in that they cater for an eagerness to interact with authors in person and listen to their readings, rather than to critically read books. The middlebrow is also marked by a desire for self-improvement without making too much effort or exposing one’s cherished beliefs and values to serious intellectual challenge.

Middlebrow culture is usually serious, but above all, it is accessible rather than difficult. It refers to high culture to seem more learned, to appropriate and regurgitate received wisdom, but it rarely strays beyond the easy, the familiar, the popular. Rather than confronting the irreconcilable or negotiating conflict, it seeks resolution, often through emotional solutions.

The middlebrow is not synonymous with middle-class culture, although they often overlap. However, the association of the middlebrow with the middle classes adds a social dimension to its status, as middle-class culture is usually scorned. India’s old elites look down on the new middle classes as social aspirants, nouveaux riches, and use other terms to mark them as culturally incompetent or crass. Their culture is too popular for the discerning, ranging from mainstream Hindi cinema or ‘Bollywood’ to writers such as Chetan Bhagat, and their media consumption includes reality TV. One could say they lack social, educational and cultural capital, even as they acquire wealth.

But who is assessing these new social groups? It is the elites, better called the old middle classes. This group, often Anglophone, finds its status being threatened by the social changes that have allowed the new middle classes to emerge. Their status anxiety and disavowal of enjoying this culture is often for public display only, allowing the guilty pleasure of enjoyment in private. I often find that people who say they don’t watch Hindi films are fully informed and updated on even trivial industry gossip. Moreover, many of the old middle classes are not culturally elite as they do not engage with high culture or intellectual texts. They prefer society gossip, fashion and lifestyle or consume middlebrow to lowbrow English-language culture. Some also parrot the opinions of global critics without engaging with the texts in question.

In recent decades, Hindi cinema has been rehabilitated and is now seen to be more acceptable, at least among younger elites. While many admit they actually enjoy the form, others claim to consume it ironically.

The complex nature of class and cultural styles in Indian cinema dates back to its origins. Indian cinema does not originate in just bazaar culture, nor were all films aimed at lower class audiences. Stunt and mythological films may have been lowbrow, but the social and more narrative genres were not. This is hardly surprising as many filmmakers were drawn from the new educated elites of lawyers and graduates, as seen in the personnel of New Theatres in Calcutta or Bombay Talkies or Wadia Movietone.

In the social genre which dominated post-Independence cinema, the hero is usually middle-class and high-caste. However, the cinema is addressed to the lower classes, with its focus on traditional—or neo-traditional—ideas of morality and identity which the hero negotiates.

A good example of this mingling is Guru Dutt’s Pyaasa (1957), which mixes outstanding poetry and music in its exploration of love and poetry with lowbrow comedy while also engaging with poverty and prostitution. The melodramatic form brings these together, finding resolution through the idea of redemptive love without trying to find a social or political solution.

Highbrow filmmakers, notably Satyajit Ray, later made films which addressed a global as well as a local audience, although their films were never popular. Ritwik Ghatak’s cinema provided complex, challenging films while developing a highbrow style.

Although the 1970s in Hindi cinema are remembered for lowbrow action fighting films typified by the Amitabh starrers, the middlebrow flourished with Hrishikesh Mukherjee, while Rajesh Khanna typified the middlebrow hero. The NFDC used state sponsorship to make more realist cinema, while highbrow films were made by directors such as Girish Kasaravalli and Shyam Benegal,

THE HINDI FILM is currently in flux. We are now seeing a style called ‘multiplex cinema’ produced in the middle ground named after its more affluent audiences. Even Yash Raj Films is now making films which could be seen as middlebrow. These focus on melodramatic moral dilemmas but show features of the middlebrow, such as Detective Byomkesh Bakshy! (2015) and Dum Laga Ke Haisha (2015).

Two increasingly popular genres that require star performances are also firmly middlebrow. The biopic focuses on the individual and the struggle with society for this person’s exceptional qualities to manifest themselves; the historical genre adds middlebrow values, portraying history as costume drama.

Indeed, this middle-ground cultural arena is becoming so dense that clusters of cultural convergence are appearing, namely the emergence of upper-middlebrow culture. This is consumed by the old elites and the new middle classes. It is a knowing category where the melodrama is overlaid by style in order to be clever and cool. Such films have a much tighter narrative focus, which overwhelms the disruptive and digressive features of the Hindi film. They focus on rounded individuals who are goal-oriented even though the movies contain key elements of Bollywood, albeit presented ironically.

The confident younger middle classes are happy to consume these films alongside mainstream Hindi cinema, Hollywood and world cinema. They also enjoy the lowbrow cinemas, albeit in a more knowing, ironic manner. These include the films known as ‘body genres’ for the way they are experienced physically—comedy, horror and pornography.

Examples of upper-middlebrow cinema would include many of the Merchant-Ivory films, whose attention to surface and detail is typical of the heritage film; many of Mani Ratnam’s films (mostly dubbed from Tamil); and films in which high culture is couched in entertainment forms.

Many recent major hits could be classed as upper middlebrow: PK (2014), which challenges received wisdom about religion but resolves difference through emotion and lengthy dialogues, or Bajrangi Bhaijaan (2015), which allows a Hindutva supporter hostile to Muslims to become a hero in Pakistan when he is redeemed by the love of a Pakistani child. Bhansali’s films are knowingly superficial and fetishise the decorative but raise serious issues again resolved through emotion. Anurag Kashyap’s films address knowing audiences of cinephiles, while Vikramaditya Motwane’s Lootera (2013) is a heritage film that evokes nostalgia, while the mostly English-language Lunchbox (2013) uses comedy.

Although there is not an avant-garde Hindi cinema today, more challenging films are being made. These include Vishal Bhardwaj’s adaptations and reworkings of Shakespeare, or Anand Gandhi’s Ship of Theseus (2013).

The use of the term ‘middlebrow’ allows us to explore ideas of class, aspiration and culture.

The use of ‘brows’ is also a rather fun way to classify culture. Or is it just for the kind of cultural snob who loves the highbrow and the lowbrow, is momentarily seduced by upper middlebrow, but will never admit to the middlebrow. What, me?