India-Israel Romance: Anxiety Over the Amity 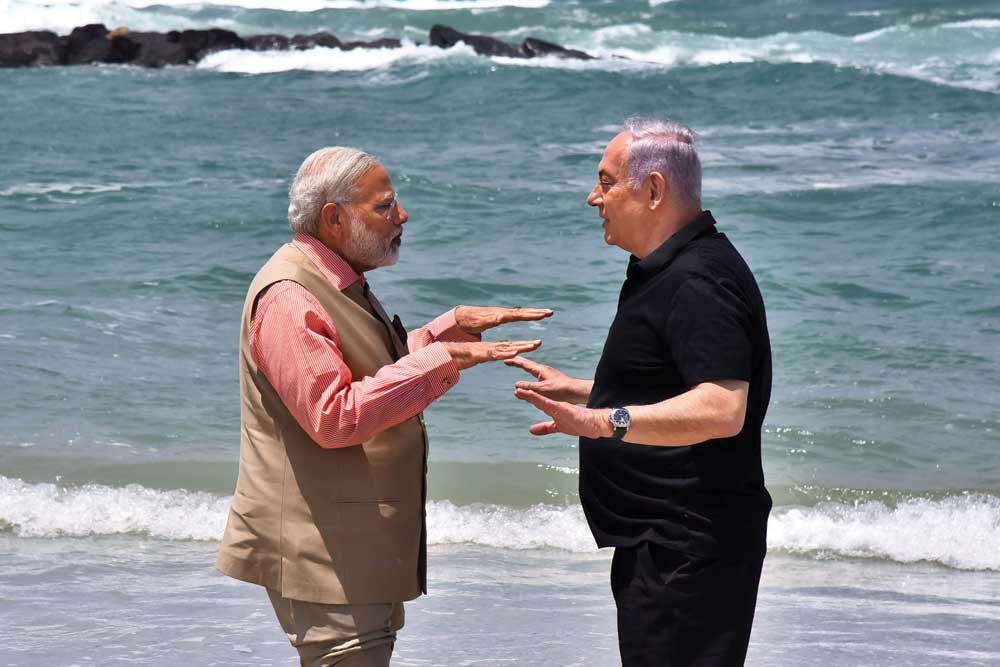 STROLLING ON ISRAEL’S Olga Beach in semi-casuals, soundless images of Narendra Modi and Binyamin Netanyahu gesticulating on TV screens six months ago were enough to capture the changed relationship between India and Israel. It gave the impression of an irreversible shift in New Delhi’s Middle East policy. As the Indian Prime Minister pithily put it, it was an ‘I4I’ moment, ‘India for Israel and Israel for India.’

With Israeli Prime Minister Netanyahu on a visit to India to talk more defence, trade and curiously even Hindi cinema, ample warmth has been on display. While some had feared that this bonhomie would hurt India’s ties with Islamic countries of the Middle East, signs of any such backlash have been minimal. One reason is that the Palestine Liberation Organization (PLO), which runs the West Bank (to whatever extent Israel lets it), has proven to be more pragmatic than reactive on the matter. Dr Abdullah Abdullah, who chairs the political committee of the Palestinian Legislative Council and was previously Fatah’s deputy commissioner for international affairs, told me last July that so long as New Delhi stands by a two-state solution for the region’s problem, Palestinians have no objection to India-Israel relations. On January 14th, he reiterated his view via an encrypted exchange: ‘The Indian PM’s visit to Israel or Netanyahu’s visit to India is a bilateral matter between them.’ Alluding to India’s vote against Trump’s move to declare Jerusalem Israel’s capital, he adds, ‘We value India sticking to its principled stand and supporting us at the international forum.’

On December 6th last year, US President Donald Trump had dropped a bombshell by declaring that the US will move its embassy from Tel Aviv to Jerusalem. Every country that has diplomatic missions in Israel has them in the former because of the latter’s disputed status. Israel has occupied East Jerusalem, home to holy sites for Christians, Muslims and Jews, in the Six Day War of 1967 and sovereignty over it is perhaps the most sensitive issue in the Israeli-Palestinian conflict. Although the question of the holy city is to be addressed in later stages of the on-and-off peace talks, Trump went ahead with his announcement, inviting a UN resolution calling upon the US to withdraw its recognition of Jerusalem as the capital of Israel. Despite India’s BJP-led Government being friendlier with Israel than any of its predecessors—the Congress always held the late PLO leader Yasser Arafat in high esteem—it was among the 127 countries in favour of the UN resolution. This has assuaged Palestinian anxiety over their cause being abandoned by New Delhi.

On India-Palestine relations in the past, Dr Abdullah says, ‘We expect India to raise the human rights violations by Israel in Palestine as it did earlier.’ He makes a moral argument too: ‘Shouldn’t India side with the occupied people than the occupier?’

Dr Abdullah’s words suggest a sense of disappointment, even if he is careful not to be critical of India’s recent Israel tilt. For the past year, Palestinian diplomats have been seeking assurances from India that it would continue to back their cause at the UN. Palestinian President Mahmoud Abbas even visited India a month before Modi’s Israel tour, and now a separate visit by India’s Prime Minister to Palestine is being planned. Despite the optics, India’s ruling party has managed to strike a balance between its inclinations and India’s international commitments.

For a long time, Indian analysts believed support for Palestine was both a moral and strategic stance, with Arabs thought to be pleased by it; and with several million citizens working in the Gulf’s Arab countries, India treads cautiously in its relations with them. Changing dynamics in the region, however, make space for a more nuanced approach. Middle Eastern countries today do not have a unified position on the conflict, with significant differences between the Gulf’s two major rivals, the Sunni-dominant Kingdom of Saudi Arabia and Shia-majority republic Iran. Both these Islamic powers have been vying for supremacy in the region.

“The Indian PM’s visit to Israel or Netanyahu’s visit to India is a bilateral matter between them. We value India sticking to its principled stand and supporting us at the international forum” – Dr Abdullah Abdullah, chairman, political committee, Palestinian Legislative Council

Saudi Arabia’s main concern is the rise of Iran, not a dream deal for Palestine. In the recent wars in Syria and Iraq, while militant groups supported by Saudis and Qataris (and Turks) had to bite the dust, Iranian allies like Syrian President Bashar al-Assad scored a success. Iran, a sworn enemy of the US and Israel, has expanded its influence in the Levant lately, much to the consternation of Saudi Arabia, whose crown prince Mohammad bin Salman is said to be especially keen to contain Tehran’s ambitions. For this, he needs the support of the US as well as Israel, with which some believe he is trying to forge a tacit understanding. As reported by The New York Times, the prince met Mahmoud Abbas in November and suggested a peace plan that would be unacceptable to any Palestinian leader; under the proposal, the illegal Israeli settlements in the West Bank will stay with Israel, Palestinians will have no right to return, and East Jerusalem would not be the capital of a future state of Palestine.

According to Dr Mehran Kamrava, an international affairs expert at the Georgetown School of Foreign Policy in Doha, Saudi Arabia wants a good working relationship with Israel, so India needn’t worry about Riyadh’s reaction to its new equation with it. “The Saudis have a de facto alliance with Israel; UAE is on the same path and they generally accept the idea of Israel,” he says over the phone, “Netanyahu’s visit or India and Israel’s growing ties will not impact the Gulf’s [relations with] India.”

Observers also note Riyadh’s protest on Trump’s Jerusalem declaration was a token one. Tehran, in contrast, has had chants of ‘Death to Israel’ on its streets ever since the Islamic revolution of 1979. After Trump’s move, Iran’s Commander of the Quds force Major General Qasem Soleimani promised to help the Palestinian resistance take on Israel with all means necessary. Al Quds is the Arabic name for Jerusalem and the force named after it is Iran’s division for extraterritorial military and clandestine operations. Iran leads an anti-Israel axis that includes Assad’s Syrian forces and the Hizbollah in Lebanon. While this is largely a Shia alliance, analysts say it suits Iran’s one-upmanship in matters of faith to back the mostly Sunni Palestinian struggle.

Just a few days before Modi’s Israel visit, Iran’s supreme leader Ayatollah Khamenei had tweeted, ‘Muslim world should openly support people of #Bahrain, #Kashmir, #Yemen, etc and repudiate oppressors & tyrants who attacked ppl in #Ramadan’. This could be interpreted as a threat that Iran would support Kashmiri separatists, though Tehran’s actual relations with New Delhi have not suffered. The first phase of the strategic Chabahar port in Iran, being developed jointly with India to open a trade route to Afghanistan and Central Asia bypassing Pakistan, got underway shortly after. Iran is the third largest oil supplier to India and needs trade ties with New Delhi as much as India needs Tehran as a way round Pakistan for its regional business interests. New Delhi maintained silence over the mass protests that broke out in late 2017 in Iran.

Beyond the economic interdependence, Dr Mohammad Marandi, dean of global studies at Tehran University, offers a softer rationale for Khamenei’s tweet. “The tweet was not a threat but stating how Kashmir hurts India’s image in the Islamic world,” he says over the phone. On Palestine, Dr Marandi invokes India’s credentials as a pioneer of the Non-Aligned Movement: “India has been a leader of anti-colonialism and Iran remembers that. We hope India takes its history into consideration on Palestine.”

India has moved from Nehruvian worldview to multi-lateralism. Yet, if New Delhi is seemingly pro-Israel, it has also backed Syria. At the Four Seasons hotel in Damascus last August, Al-Assad’s advisor Dr Bouthana Shabban voiced the Arab world’s frustration with India’s new Israel policy. Syria has always supported India on Kashmir, and New Delhi has stood by the Syrian regime through the seven-year-long Syrian war. Indian analysts put this down to India’s long-held opposition to any ‘regime change’ imposed by the West. Such a show of support wasn’t enough for Dr Shabban. “Syria is very disappointed with the unnecessary optics displayed during PM Modi’s Israel visit,” she told me, “Syria will think twice before allocating projects to India. We knew India was trading with Israel, but such inconsideration to Arab sentiment is hurtful.”

Dr Shabban raises an important question, which resonates in some Indian diplomatic quarters. If India and Israel have had a good relationship without irking Arabs for 25 years now, what does the elaborate display of affection between the two leaders achieve?

Most Arabs applaud India for its non-aligned, anti-colonialist past and speak of India fondly for its independent foreign policy. While India has not faced a backlash from the Islamic world so far, India’s soft power could suffer if seen to be joining the US-Israel camp.

Abbas recently recalled its Palestinian envoy who participated in a Hafiz Saeed rally in Pakistan, but has also signalled that ignoring Palestinian interests may have a cost for New Delhi. India’s embrace of Israel appears to have annoyed the world’s Muslims only mildly so far. This could change if India does not move deftly. The internal quarrels of the Islamic world can’t shield Indian interests beyond a point.

Also Read
The MoBi Moment
The Road to Jerusalem 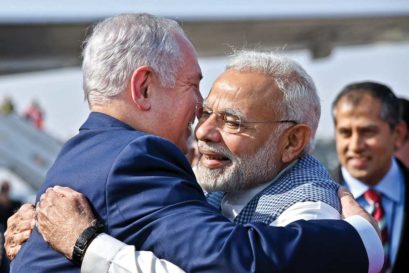