Modi in the Marketplace

The Prime Minister is on target 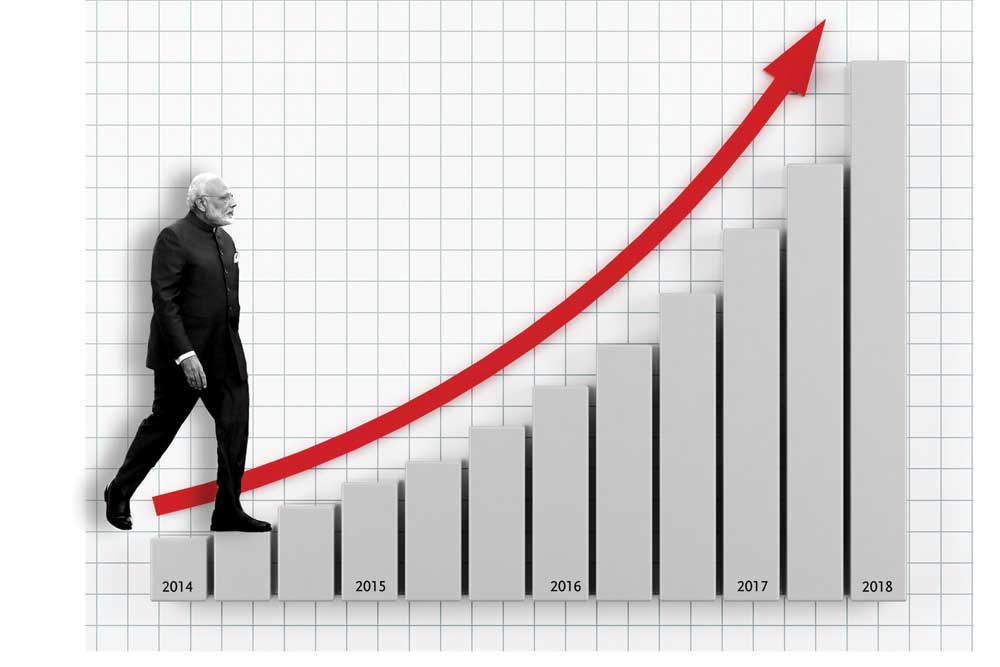 THERE IS SOMETHING lying under the headlines of rising fuel prices and a depreciating rupee. And that is the story of a growth rate which is around 8 per cent (at last estimate) and a rate of inflation which is fairly low and stable, about 5 per cent. India’s economy is in much better shape than some of the more dire analysis would suggest. A combination of Modi and Markets has enabled India to rise from the sinking depths of highly inflationary crony capitalism-infested growth to a more sustainable, cleaner and low-inflation growth trajectory.

Obviously, challenges remain. India’s dependence on imported oil—over whose price it has no influence—is a perennial threat to the external account. In normal times, India can attract the foreign investment necessary to finance the deficit. However, in times when capital is heading for the safety of a strong US economy amidst crises in several emerging economies, while oil prices are high, there will be a temporary blip. But as long as the economy’s fundamentals—high growth and low inflation—are strong, the cycle will turn sooner than later.

Public memory is short. A little over eight years ago, the then Government’s chief mandarins publicly argued that high inflation was a price that India had to pay for growth. That inflation hits the poor the hardest seemed to have been lost on them. Less publicly, they hoped that corruption and cronyism would be an acceptable by-product of high growth. In the end, raging inflation and rampant corruption killed the growth story and this led to the decimation of a regime which just five years earlier had won an unprecedented second consecutive term in office with an enhanced majority. In the midst of the ruins of 2013 and early 2014, it was hardly certain or even obvious that India would bounce back sharply. Many countries have drowned in a morass of hyper- inflation and web of cronyism—there are dozens of examples in Africa and Latin America—becoming chronic under-achievers while immiserising their people.

In 2014, India could not afford to turn its back on liberalisation and free markets, which, despite cronyism, had delivered far superior outcomes to the previous socialism. Nor could it any longer accept the fact that the government apparatus had continued to be an unreformed, corrupt entity untouched by the winds of reform. India needed to restore the faith of its people in markets and the state at the same time.

The arrival of Narendra Modi as Prime Minister in May 2014 was a tonic. In his long tenure as Chief Minister of Gujarat, Modi had a reputation for honesty and incorruptibility, a reputation for creating an enabling ecosystem for entrepreneurship and a reputation for being able to make the state apparatus deliver public goods with reasonable efficiency—precisely the things New Delhi lacked but desperately required.

Has the promise of 2014 been fulfilled? The answer depends on what that promise is interpreted as. For some on the economic right, Modi would be India’s answer to Ronald Reagan and Margaret Thatcher. But that was always a flawed expectation given Modi’s record and the Indian context. In a country where per capita income was less than $2,000 per year, and where a majority of people live on less than $2 a day, it would make no political or economic sense to carry out a total rollback of government. But there was a strong case to rationalise and reorient its role and Modi has taken considerable strides in executing that.

As long as reform broadly focuses on freeing markets while reinventing government, it will head in the right direction

Significantly, there has been a strong commitment to fiscal consolidation even in the face of sluggish private investment. The Government is clear that it must not corner all the financial resources in the economy. At the same time, there has been an attempt to shift government spending towards productive investment like infrastructure (the roads and highways programme has grown rapidly in the last four years) and away from unproductive and indiscriminate subsidies. Those who need financial support from the Government still get it, but from efficient direct benefit transfers into bank accounts, not from unreliable, leaky and corrupt middlemen. It is estimated the savings from DBT schemes are in the range of Rs 80,000 crore.

The Government has also determined that it will not over- regulate and strive to make it easier to do business in India. The political commitment to raise India’s ranking on the World Bank’s Ease of Doing Business Survey is critical in ensuring that the bureaucracy moves towards cutting red tape. Modi’s Government restarted the strategic disinvestment programme abandoned by the UPA for ten years and has also moved to close down several sick public sector companies. Simultaneously, there is a thrust for entrepreneurship, for a new generation of businesses to grow which do not owe their rise to state largesse. Like the IT entrepreneurs of the 1980s and 1990s, this new generation must be role models for the genuinely talented to take up entrepreneurship. No country has prospered without generating wealth and only a wide and deep entrepreneurship ecosystem can deliver that.

Of course, the wealth created needs to be reasonably well distributed. For that, India needs to radically upgrade its human capital system. Unless every Indian has the capability to harness her or his full potential, India will never be a rich country. Modi’s Government has made a shift in the approach towards the poor— from being centred on doles to focusing on investing in education, health, nutrition and skills. It is often unacknowledged that the 29 state governments of India have to play a key role in these sectors which fall under their jurisdiction. It is also true that previously, most Union governments have chosen to address the challenges in social sectors by unveiling large ‘Centrally Sponsored Schemes’ of the one-size-fits-all kind. By accepting the recommendations of the 14th Finance Commission early in its tenure, which increased the proportion of financial devolution to states from 32 per cent to 42 per cent of the Central tax pool, Modi’s Government powered a new federalism where states had more financial and functional autonomy to design programmes. The Centre would not simply withdraw and abdicate responsibility. Instead, it would seek to foster completion among states in a race to the top via ranking them on outcomes related to education health and water. In a noisy democracy such as India’s, putting these rankings in the public domain is proving hugely successful in motivating state leaderships and their senior bureaucracy to deliver better outcomes. This competitive federalism, which needs to seep down to the third tier of government, namely panchayats and urban local bodies, has transformed the paradigm of governance. The top-down model failed in a large and diverse country. A bottom-up model is most likely to succeed.

Apart from reinventing federalism, there is also a new emphasis on monitoring and evaluation of Central Government programmes with the Prime Minister personally overseeing hurdles in big-ticket projects and schemes via his monthly video- conference with all secretaries of the Government of India and the chief secretaries of every state. For the first time, efficiency and competition, usually hallmarks of free markets, are being applied to the government apparatus.

It can be nobody’s argument that the reform menu has already been exhausted. There is still considerable scope to further liberalise the economy while ensuring that it is not captured by monopolists and oligopolists. Reform is a continuous process. And it requires the political leadership to ceaselessly argue the case. As long as it broadly focuses on freeing markets while reinventing government, it will head in the right direction. Modi is on target. Of course, in any democratic system of government, various interest groups wield legitimate influence and there will be occasional setbacks. But ultimately, as India grows richer and more of its people acquire human capital, both markets and governments will be held to a continuously high and rising standard. That can only be a good thing.