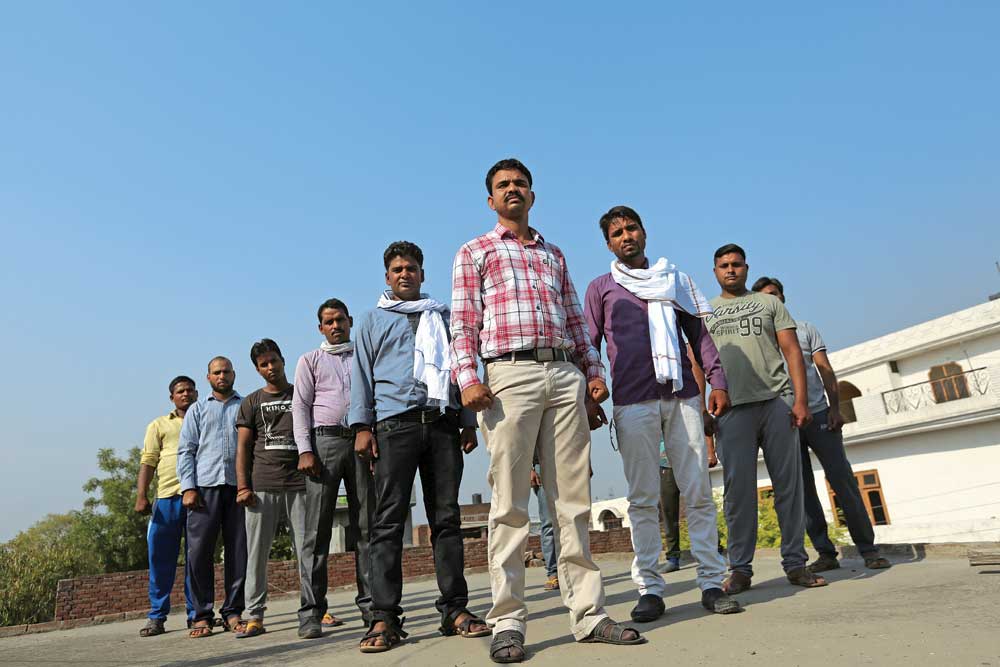 Advocate Chandra Shekhar Azad ‘Ravan’—that is how the man on the phone introduces himself. “Ravan fought for his sister’s honour. I fight for the honour of thousands of my Dalit sisters,” he explains. There are 25 police cases registered against him for allegedly inciting violence, rioting and communal tension and for damaging public property. A wanted man, he is in hiding, but he agrees to speak to Open over the phone. Right off the bat, we talk about the protest on May 9th against atrocities on Dalits in Saharanpur that went awry. Organised under the banner of Azad’s outfit, Bheem Army, it turned into a full-fledged clash between the police and the members of the army, who burned buses and other vehicles and beat up onlookers. “It was a well-planned move by the police to defame us. Those who took to violence were not our people; they were planted by the police to vilify us,” Azad claims.

A week later, 30-year-old Azad has become a household name in western UP. He is hailed as the new messiah of Dalits and commands a huge fan following among young Dalit men. Multiple pages have been created on Facebook in the name of Azad and his organisation and thousands of youth have pledged their support. “Initially, we kept a count of the number of new members. But for the past week, hundreds of people are joining every hour,” says Vinay Ratan Singh, national president and co-founder of Bheem Army.

Dalit millennials, their aspirations soaring way beyond roti- kapda-makaan, do not care for polltime identity politics. Instead, they are on the lookout for fresh leadership to help channel their energy and growth. “The current Dalit leadership in politics reached its peak in the 1970 and the ’80s. It went through a different kind of struggle,” says social commentator Chandrabhan Prasad. “The new Dalit is different, and armed with education and technology. So there is a gap between the leadership and the people.” Dalit rebels like Azad are beginning to fill this gap, albeit by unconventional and unlawful means. The local leaders of the BSP in Saharanpur are aware of the increasing influence of the Bheem Army. “We are a political party working for the overall betterment of the Dalits,” says Mazid Ali, a BSP leader from Deoband. “They are a bunch of boys fighting it out on the streets. There is no comparison.” Chandra Shekhar Azad doesn’t reveal his political inclinations but blames Mayawati for exploiting Dalits. “Mayawati calls us BJP’s agents. But several times in the past, she has allied with them. She thinks of Dalits only as a vote bank during elections,” he says. “We have no political agenda at the moment but we won’t let someone treat us as a vote bank.”

Azad’s father, Goverdhan Das, was a teacher who was later promoted as pricipal of a government school in Saharanpur. He had named his sons after Indian heroes Chandra Shekhar Azad and Bhagat Singh, but until recently, there was little evidence of the revolutionary in Azad. A bachelor of law, Azad wanted to go abroad for further studies—perhaps an MBA. But circumstances forced him to settle down in Saharanpur, his native district. Back home, he was haunted by memories of the injustice his father suffered. Humiliated by upper caste teachers and offered water in a separate glass, he craved the respect that Dalits never had. Azad, who was preparing for the civil services, and his friend Vinay Ratan Singh, a Dalit youth who ran a computer shop in Saharanpur, decided to start a school for Dalit children who weren’t privileged enough to attend a regular school. Bheem Pathshala, set up in July 2014, took in kids from nearby Dalit settlements and villages and its teacher-volunteers taught for free. It was a small social experiment with limited success, and it certainly did not involve a horde of angry Dalit youth.

“Mayawati thinks of Dalits only as a vote bank during elections. We have no political agenda at the moment but we won’t let someone treat us as a vote bank” – Chandra Shekhar Azad ‘Ravan’, co-founder of Bheem Army

The idea of an ‘army’ was mooted as a reaction to a caste clash in Gharkoli, Azad’s village, in April 2015. A Dalit boy had put up a board outside his house that read: The Great Chamar, Village Gharkoli. The village has a population of around 1,500–1,200 Dalits and the rest are Rajputs. The Thakurs of Gharkoli, however, objected to such open glorification of a lower caste. Overnight, the board disappeared and Ambedkar’s statue in the village was painted black. This led to an open and immediate conflict between the Dalits and the Rajputs. “You are proud to announce on the back of your vehicle that you are a Kshatriya, a Gurjar, or a Jat,” says Azad. “When we do the same, you have a problem.” Azad, Singh and their friends began organising the Dalits of Saharanpur against casteist practices. Further, they formed an army on the lines of the Hindu Yuva Vahini, the Bajrang Dal and the Shri Ram Sene to protect the rights of their community. The Bheem Army came into being on July 21, 2015. “An army’s job is to protect citizens. That is why we named our outfit Bheem Army. We swore to protect the honour of Dalits,” Azad says.

In two years, the Bheem Army has fanned out across 40 districts of Uttar Pradesh. Its leaders go from village to village, meeting people, sensitising them about Dalit rights and encouraging them to educate their children. “Bheem Army is an identity that gives us respect. We are present everywhere,” says Praveen Gautam, Saharanpur district president of the outfit. Through the efforts of the Bheem Army, every Dalit settlement in Saharanpur and nearby areas has a Ravidas temple and an Ambedkar statue. “We were not allowed to enter temples. Now we have our own Guru’s temple,” says Rajesh Kumar of Shabbirpur village. In place of Hindu bhajan nights, they have Bheem Jagaran, with Dalit singers and poets reciting Kabir and Ambedkar and singing songs about equality. And like ‘Lal Salam’, they have ‘Neela Salam’.

The organisation also promotes economic independence for Dalits. Tinku, 23, of Ravidas Colony in Saharanpur, has started a detergent business. He makes Buddh Bheem detergent and supplies it to Dalit households for a fraction of the cost of other detergents available in the market. Ram Bihari, a Bheem Army member, makes Bheem Masala—a low-cost packet of dry spices. “Dalits account for 40 per cent of our population. If we start selling our products to our people, we will not have to look outside for economic progress,” says Azad. Tinku has employed more than 20 youth, all Dalits, in his small factory. Ram Bihari employs a dozen.

“Dalits need to fight for their livelihood and then comes honour. Ideologically, Dalits have also become Brahmins as they fight for statues and temples rather than real things such as caste annihilation and jobs” – Jignesh Mevani, founder, Rashtriya Dalit Adhikar Manch

Azad says he wants to resolve conflicts between Thakurs and Dalits in an amicable way but the anger and the animosity on either side only seems to be building up. In Shabbirpur village, we come upon several burned-down hutments six days after the incident on May 9th. Outside one such house, 85-year-old Ramphal and his wife Tugli talk about the day Thakurs came in large numbers and set fire to 56 Dalit huts. “We ran to the nearby fields for cover,” says Ramphal. In the Ravidas temple in the village, the statue was vandalised. This was where the conflict started. Dalits wanted to build an Ambedkar statue here but Thakurs objected to it. A series of unfortunate events followed, shattering the fragile peace between the communities. On May 5th, when members of the Thakur community in Shabbirpur were on their way to the neighbouring village of Simlana to garland the statue of Maharana Pratap, Dalit residents took exception to the loud music played by them and allegedly started throwing stones at the procession. In retaliation, young Thakur men armed with swords and kerosene struck back at Dalits that afternoon. A police fence has since been erected in the village.

The Bheem Army has used the incident to strengthen its position. Members demanded the arrest of all those responsible for torching the houses and attacking Dalits. They announced that a Dalit Maha Panchayat would be held on May 9th at Gandhi Park, Saharanpur. Sensing possible conflict, police did not grant permission for the event but thousands of people gathered anyway. Some of them turned violent, beat up onlookers including some constables and vandalised Maharana Pratap Bhavan near Ramnagar on Malhipur Road. Police have arrested 24 people, most of them members of Bheem Army, in connection with the incident. The top leadership of the outfit is absconding over fear of arrest. “We are also investigating if the Bheem Army has a Naxal link,” says Saharanpur SSP Subhash Chandra Dubey.

Jignesh Mevani, a Dalit activist from Gujarat and founder of the Rashtriya Dalit Adhikar Manch, has announced his support to the protest. But he has some reservations on the principles and philosophy of the Bheem Army. “Putting up an Ambedkar statue won’t help. Dalits need to fight for their livelihood and then comes honour. Ideologically, Dalits have also become Brahmins as they fight for statues and temples rather than real things such as caste annihilation, jobs and livelihood,” he says. In January this year, Mevani started a protest in Ahmedabad demanding land for Dalit families who, on paper, had been allotted lands 26 years ago.Within eight days of the protest, 650 bighas of lands were freed and possession given to Dalit families. “The Dalit leadership of the country, be it Udit Raj, Ramdas Athawale, Ram Vilas Paswan or even Mayawati, have all supported or joined the BJP for their vested interests, setting back the Dalit movement,” says Mevani.

Even as we are talking to members of Bheem Army in Saharanpur, one of them receives an audio message on Whatsapp. It is Ravan’s voice. “I am not scared of arrest. I am worried about my boys who are being jailed. This fight will continue,” he says. The message is immediately forwarded to different Whatsapp groups. Azad has not decided on his political goals but he refuses to term the Bheem Army a guerrilla organisation. “Ambedkar said that as long as the Constitution is alive, he is alive,” he says. “We are here to keep him alive in people’s minds.”