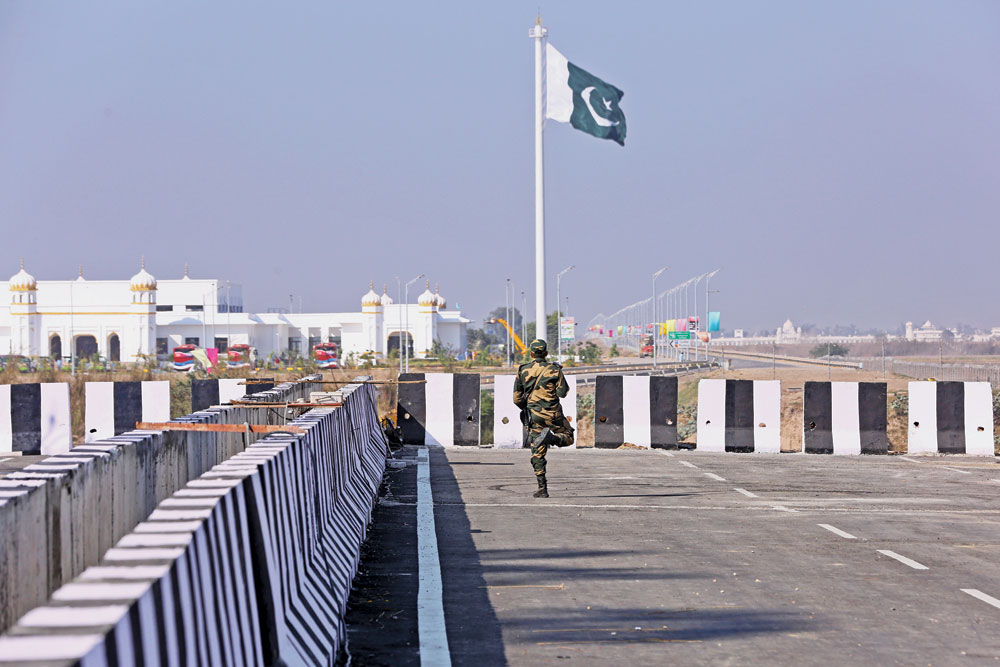 
AS FAR AS SPOTTING scopes go, the Celestron Ultima 80 is fairly well regarded, high magnification being its chief feature. It is, however, not revered. But on an elevated platform in Dera Baba Nanak, the last town on the international border in Punjab’s Gurdaspur district, that is the fate of one of these scopes. People queue up, waiting for their chance to reach the Ultima; they bow in front of it, murmur a prayer and, sometimes, stroke it reverentially.

On a clear day, from the platform, you can see deep into Narowal, Pakistan’s border district, and the domed structure that stands aloof there with the naked eye. But with the Ultima, the gathered crowds can get up close and personal with the building or the Darbar Sahib Gurudwara, as it is known. It is here that the remains of the first Guru of Sikhism, Nanak, lie, thus making it one of the most revered shrines for the fifth largest religion in the world.

Till even earlier this year, this platform, better known as Darshan Sthal, boasted a solid structure and a proper pathway. Now, it is in the process of being taken down. For, come November 9th, devotees will not have to line up for a glimpse through a single lens, rather they can visit the shrine, only a few kilometres away from the last village on the Indian border but may as well be a million kilometres away given the contentious history of the neighbours. On October 24th, India and Pakistan signed a pact to open a land corridor allowing pilgrims to visit Darbar Sahib, visa-free. For Sikhs, who have for generations prayed for ‘Khule darshan didar’ (visit and look after gurdwaras they have been separated from), it is, literally, the answer to their prayers. For India, it is the culmination of an effort initiated in 1969, the 500th birth year of Guru Nanak, by Indira Gandhi when she sought a land swap. Atal Bihari Vajpayee and Nawaz Sharif revived the idea as part of the Lahore bus diplomacy and even Manmohan Singh pursued it. But the fact that it was eventually only signed in the year of the 550th birth anniversary of Guru Nanak, on November 12th, is indication enough to his followers that this is how it was meant to be.

“Every time I used to walk through the legislature, my fellow MLAs would joke that I have a single point agenda: 550. But the fact is that this is one of the most important years for Sikhism and followers of Nanak and I felt personally responsible,” says Navtej Singh Cheema, the Member of Legislative Assembly (MLA) from Sultanpur Lodhi, the city where Guru Nanak is believed to have attained enlightenment. It is situated on the banks of a rivulet, Kali Bein, where Nanak is supposed to have stepped in and then disappeared for three days. “When he was finally found, he said the seminal words: ‘Na koi Hindu, na koi Mussalman.’ And thus was Sikhism born,” says Cheema.


He is sitting inside the ‘main pandal’ of the ‘tent city’ which has been erected here for the celebrations of the 550th birth anniversary of Nanak. “The tent city is spread over 270 acres and can accommodate 35,000 people. Sultanpur Lodhi is a small 2 km-by-2 km city. I knew that the devotees would need an experience that enhances their faith rather than leave them feeling cheated,” says Cheema. Entire pathways have been lit up, lots earmarked for parking and adequate arrangements made for everyone who may come. As many as 4,400 employees of a sanitation company are in the streets round the clock, with the result that Sultanpur Lodhi, if it wants, could be the flag bearer for the Swachh Bharat Abhiyan right now.

In India, religious gatherings often have a festive feel, akin to a mela, to them. Families dress up in their Sunday best and travel from far and wide to partake in an experience which is part religious, part holiday. And in Punjab, a land known for its larger-than-life characteristic, whether it is the fertile nature of the soil or the personalities of its inhabitants, the celebratory nature of religion follows the same pattern. Langars serve jalapeno and olive-topped pizzas and people clean up after each other in the name of the Guru. But not everyone here forgets the reality of Punjab. Rajinder Kaur and Ritu Kapoor are from the HIV testing centre of the Civil Hospital in Kapurthala. Their mobile testing bus stands close to the biggest parking lot in Sultanpur Lodhi and the two women sit outside with HIV testing vials. “Get the test done now, soon there will be a crowd and you won’t get a chance,” Rajinder tells a young man hovering aimlessly around them. Two women, who need no exhortation from Rajinder, walk up briskly, ask in how much time the results will be available and offer their blood samples. The state is afflicted with drug abuse and HIV has long been a major concern. No one bats an eyelid at the presence of HIV mobile testing units in a place of religious gathering.

In Sultanpur Lodhi, people are excited more about the birth anniversary than the Kartarpur corridor, even though Prime Minister Narendra Modi is scheduled to stop here after the inauguration on November 9th. By contrast, both events are equally major highlights in Dera Baba Nanak. A brand-new four-lane highway leads to the still-under-construction passenger terminal which can reportedly handle over 15,000 pilgrims. As many as 54 immigration counters have been set up. The Pakistani arrival terminal, clearly visible some distance away, has a more traditional façade. “Apart from this, we have earmarked Rs 170 crore for the development of the region which will include an agriculture college as well as a skill development centre,” says Punjab Cooperation and Jails Minister Sukhjinder Singh Randhawa. He is also the local MLA.

For Sikhs, who have for generations prayed for ‘Khule darshan didar’ (visit and look after gurdwaras they have been separated from), the Kartarpur corridor is the answer to their prayer

The establishment of this corridor has long been a demand in Dera Baba Nanak, for reasons which are as much economic as religious. Local residents will tell you that it was actually a thriving trade centre. “But after Partition, we were left with nothing. The subsequent wars between India and Pakistan made things worse, as more and more people migrated. Today, we have a population of a little over 6,000. This corridor will change our future. Already, there is a festive feel in every household here because business has seen an uptick,” says Gopal Singh who runs a local tailoring shop in the bazaar just off the main gurdwara. The town looks medieval with its stoned pathways and narrow lanes. There is muted excitement at the prospect that real estate prices may increase even though there is concern whether the small town will be able to handle the influx of visitors, set to become a regular feature. Initially, Pakistan had limited daily visitors to 500 but on India’s request it was increased to 5,000. On special occasions, the number might be increased. “I think more than the lens of religion, we should see this development through the lens of diplomacy. Maybe this will be the turning point India-Pakistan relations need,” says Dilbagh Singh, a local businessman from Gosul village. Singh and his wife make a pilgrimage to Dera Baba Nanak once every two weeks. They say the place has changed drastically since the corridor pact was signed. “No matter how many people come, we are all waiting with open hearts and arms. We will never begrudge pilgrims coming here in the fear that our resources will be strained,” Mrs Singh says.

If religion in India is a spectacle, then it is also extremely political. And while Punjab is gearing up for the opening, on the one hand, it has also been witness to a squabble, on the other hand, between the state government and the Shiromani Gurdwara Parbhandak Committee (SGPC), the principal organisation responsible for the management of gurdwaras. They are embroiled in a game of one-upmanship, which has resulted in two separate celebratory events rather than the earlier agreed upon joint celebration. The SGPC is Akali Dal-dominated, a bitter rival of the Congress in the state, and both sides are accusing each other of creating a rift. It started with the laying of the foundation stone itself, which had to be removed hours before its inauguration by the Vice President in November last year. The stone had the names of former Chief Minister Parkash Singh Badal as well as Shiromani Akali Dal President Sukhbir Singh Badal. The local MLA Randhawa had threatened to boycott the event at that time. “It is really sad that this game is being played at a time when we should all be coming together. The SGPC needs to understand this,” he says. SGPC President GS Longowal, whom Open met in Sultanpur Lodhi, however claims that it is the Congress that needs to back down. “The emotions of people are tied to us. They know that we are the keepers of the faith, just see the difference between the crowds that go to our pandal and theirs. A game of one-upmanship is being played by them, not us,” he says. Caught in all this is the common man. “So much money has been spent with both the government and the SGPC erecting tents and cities. The state is in the grip of crises, from agrarian to health, which we don’t want to acknowledge. The very characteristic that once made us—our excess, be it in terms of valour or our hard work—has reached an extreme in drug use and farmer suicides. The 550th birth year of Nanak is an occasion for celebration but should also involve deep introspection,” says Balbir Singh, an ageing farmer from Nawanshahr. The Prime Minister, it is believed, after inaugurating the corridor will address a public rally a few kilometers away from the centre. The first jatha (a procession of Sikhs) that will go to Kartarpur includes the Chief Minister and all the MLAs. Imran Khan, the Prime Minister of Pakistan, has tweeted that no fee will be charged on the day of the inauguration. Pakistan has decided to levy a fee of $20 per pilgrim, a move met with much disapproval in India.

Even as the national capital struggled with extremely dangerous levels of air pollution, Dera Baba Nanak and its surrounding villages boast of clear blue skies in spite of stubble burning. Randhawa is standing on a causeway constructed by India at the zero point from which Pakistan is, literally, a stone’s throw away. However, the bridge is only half done as Pakistan needs to complete construction on its side. The creek over which it is to be built is prone to flooding and the causeway has been erected for the safety of pilgrims. Suspended mid-air, it is right now the bridge to nowhere, an apt metaphor for relations between the two neighbours. Will the corridor eventually bridge this gap? The coming weeks will give us an indication.