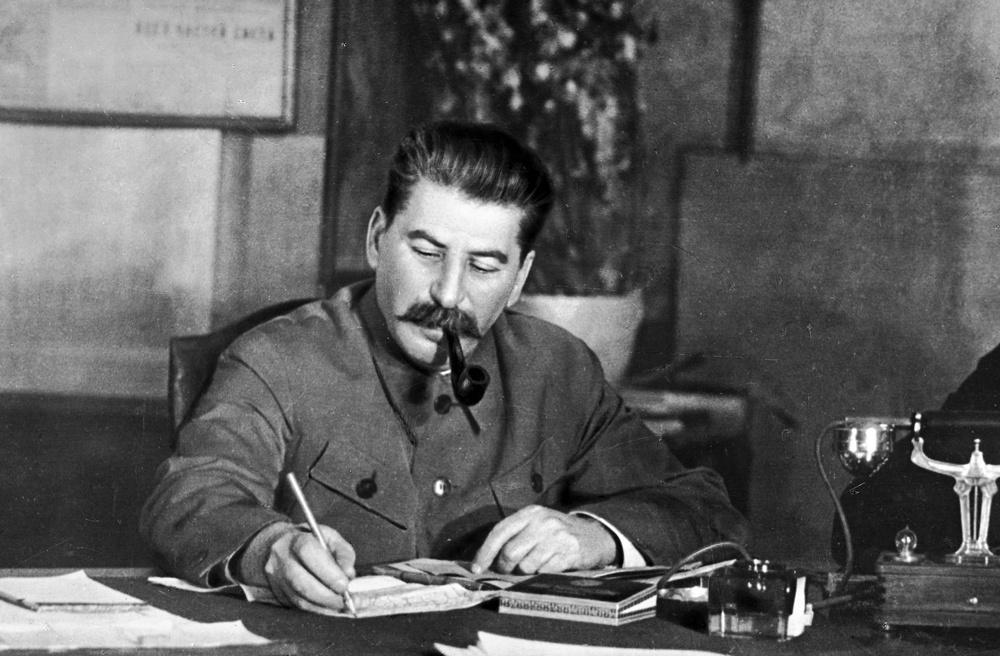 
Very little has changed about the Narvskaya metro station since it opened in 1955 in what was then Leningrad. The station’s theme was designed to celebrate the various professions in the Soviet Union, and its walls are dotted with haut-reliefs of sailors, doctors, engineers and farmers. The only image missing from the station is an enormous mosaic of Joseph Stalin, the leader whose legacy polarises Russia six-and-a-half decades after his death.

While those whose relatives were directly affected by the Soviet leader’s gulags condemn him, polls actually indicate that Stalin is popular in contemporary Russia. In early 2019, the Levada Centre, a highly respected independent polling and sociological research organisation conducted a poll that surprised those who look upon Stalin as a tyrant. The poll, taken in 137 Russian cities and towns of people older than 18, revealed that 70 per cent of respondents believed Stalin’s rule was good for the country. This was the highest rating in 20 years.

In 2005 when Russia enjoyed better relations with the West than it does now, Vladimir Putin told the German media that Stalin was a tyrant but wasn’t as bad as Hitler. Critics of the Russian president now accuse him, albeit unfairly, of trying to rehabilitate Stalin’s legacy.

Leonty Byzov, a leading researcher at the Russian Academy of Sciences, attributes the Levada poll results with politicisation and a divide in society, which leads to more radical assessments of history. He told Russian publication RBK that the process of creating a positive image of Stalin is supported by state-owned media. Ironically enough, some opponents of the Russian president try and make Stalin look like some symbol of justice when compared to the present government.

Day of Remembrance of the Victims of Political Repressions

Each year on October 30th, Russia marks the Day or Remembrance of the Victims of Political Repressions, a public holiday established in 1991 just before the collapse of the Soviet Union. It remains a public holiday in Russia and sombre memorial services are held to remember those who were executed by the Soviet Union. There were almost 800,000 documented executions in the USSR between 1921 and 1953, the year Stalin died. The unofficial number is likely to be higher. Over a million people perished in gulags, again as per official numbers.

The memorial services for victims of political repression are supported by the Russian Orthodox Church, which faced severe persecution under Stalin. Since the government has been encouraging of the church, it allows the memorial holiday to continue, despite critics accusing the Kremlin of a slow whitewashing of Soviet crimes.

The denunciation of Stalin has been periodic over the last several decades beginning with Nikita Khrushchev. The mural of Stalin at the Narvskaya metro station in St Petersburg was removed in 1961 in the Khrushchev era. It was around that time that most Stalin statues were removed from across the Soviet Union. While a Lenin statue and Lenin Square can be seen even in the smallest towns in Russian regions, Stalin is missing even in street names.

Even the name Stalingrad was changed in 1961, but the city was renamed to Volgograd since its original name Tsaritsyn was unacceptable to the communists. There have been attempts by some parties to restore the name Stalingrad in honour of the Battle of Stalingrad, the event that is widely believed as changing the course of the Second World War, but the name was revived for a few anniversaries.

Some Russians tend to overlook the deaths caused by Stalin the same way Britons do with Winston Churchill. The British politician’s open bigotry, notorious role played in the Bengal Famine and other negative aspects of his life are whitewashed by the British public who see him as a man whose strong leadership helped the British stave off the Nazis in the Second World War. In this sense, the mass Western criticism of Russians when it comes to their favourable views of Stalin can seem hypocritical.

The telling of the story of World War II, or the Great Patriotic War as it’s called in Russia, greatly influences the way many Russians see Stalin. May 9th, Victory Day, is one of the most important holidays in Russia and the country’s victory over Hitler and Nazi Germany is seen as one of its greatest achievements. The USSR sacrificed 27 million lives in the war, which simply could not have been won without the Soviet people.

Each year the celebrations and parade in Moscow get more grandiose. In 2005, when the 60th anniversary of the victory was celebrated in Moscow, Western leaders such as George W Bush were present. (Manmohan Singh was also present then). In 2020, when the 75th anniversary is marked, the most important guests will be Narendra Modi and Xi Jinping. In the lead up to Victory Day, schools keep special programmes and TV stations screen war films. Stalin is never portrayed badly in schools or in old films. This just helps people see him more favourably. Another factor in Russians looking at Stalin in a positive light is the deteriorating relations between Russia and the West.

“No one can doubt the feats of the Red Army or the enormous sacrifice of the Soviet people. But mythologising that victory has come to entail glorifying Stalin,” Andrei Kolesnikov, a senior fellow at the Carnegie Moscow Center wrote for Foreign Affairs. “In recent years, TV propagandists have represented World War II not only as a war with Nazi Germany but as a battle against the West. Russians remember the role of the Allies less and less.”

Others argue that glorification of Stalin has been a deliberate but subtle policy over the last few years. The idea behind rehabilitating Stalin’s legacy is closely connected with building patriotic sentiment in the country. However when Vladimir Putin was recently questioned on the purges of the Stalin era, he said it was a “dark page.”

While Stalin and the whole legacy of the Soviet Union is hated in neighbouring Ukraine, many Russians look back at the communist past with a tinge of nostalgia. Soviet films from the 1950s to ’80s show the pleasant sides of life in the USSR. Those of an older generation dealing with inflation and rising costs of living look back to a time of economic stability and security.

The achievements of the USSR such as winning the Second World War, sporting successes, the space programme and being a geopolitical superpower are all celebrated and to an extent appropriated by the present Russian government. It’s common to hear Russians praise the achievements of the Stalin era.

Moscow’s Stalinist ‘Seven Sister’ buildings, one of which hosts the Russian Foreign Ministry, are on the must-see lists of visitors, both domestic and foreign. The Moscow and St Petersburg metros, both of which have their fair share of palace-like stations with chandeliers, artwork and statues, are also celebrated as an achievement of Stalin. The grandiose designs of metro stations was discouraged by Khrushchev.

A craving for past glories, which is easy to understand in a country like India, has played a role in Russians accepting Stalin’s rule as positive. The monuments and infrastructure built in his time are alive, well and functioning.

Although there are reports of Stalin statues coming up in a few small Russian towns, it’s unlikely that there will be a major effort from Moscow to glorify Stalin and efforts will remain subtle. Public memory remains sharp in Russia, a country of 144 million. Only 51 per cent of those who were polled by Levada said they viewed Stalin favourably as a person. Just four per cent of those polled said they admired him.

With the public holiday to mark the memory of the victims of political repression, those who lost relatives have a public outlet for their grief.

Anna Baltak (name changed on request), a senior manager with a marketing firm in St Petersburg, has mixed views on the legacy of Stalin. “This topic is very difficult and painful in Russia,” she said. “I was born in Kolyma (a remote region in north-eastern Russia), the place that witnessed the largest repressions during Stalin’s era.”

Baltak says her mother’s family lost three members during the time of Stalin’s purge. “Stalin built a very strong government machinery and country on blood and suffering…Russia was very strong, Russia suffered so much. The biggest war of the world is connected with that period. There is no answer to the question whether his rule was positive or negative,” she added.

Over the last week, conversations with Russian friends in Moscow and St Petersburg on the legacy of Stalin have evoked strong reactions. Those least connected with the purges often call for a need to look at the Soviet leader through a more universal prism. They claim the repressions under the Tsars were equally heinous and hidden and forgotten from public memory.

The idea of sending political prisoners to Siberia and beyond and making them live in inhumane and brutal conditions predates the Soviet Union and Stalin, yet the achievements of the Russian royalty are now celebrated.

Anton Chekhov’s Sakhalin Island, written in the late 19th century, gives a disturbing account of how political prisoners were treated and lived in a penal entrenchment colony.

Baltak says greater transparency is needed on what exactly happened in Stalinist Russia, so there can be closure for the relatives and descendants of victims. “Yes, the Tsars were cruel and built the institutions exploited by Stalin, so we would need to look at their role as well,” she said, but emphasised that there was a far greater danger with rehabilitating the Soviet leader’s legacy.

Transparency, acceptance and closure are things that Russia needs to do for its own citizens. In an area with a lot of grey matter, how to bring about this closure is a challenge. Aleksandr Solzhenitsyn summed up the Russian dilemma best: “Should we wrap it all up and simply say that they arrested the innocent? But we omitted saying that the very concept of guilt had been repealed by the proletarian revolution and, at the beginning of the thirties, was defined as rightist opportunism! So we can’t even discuss these out-of-date concepts, guilt and innocence.”