Being a Gandhi in the Time of Modi 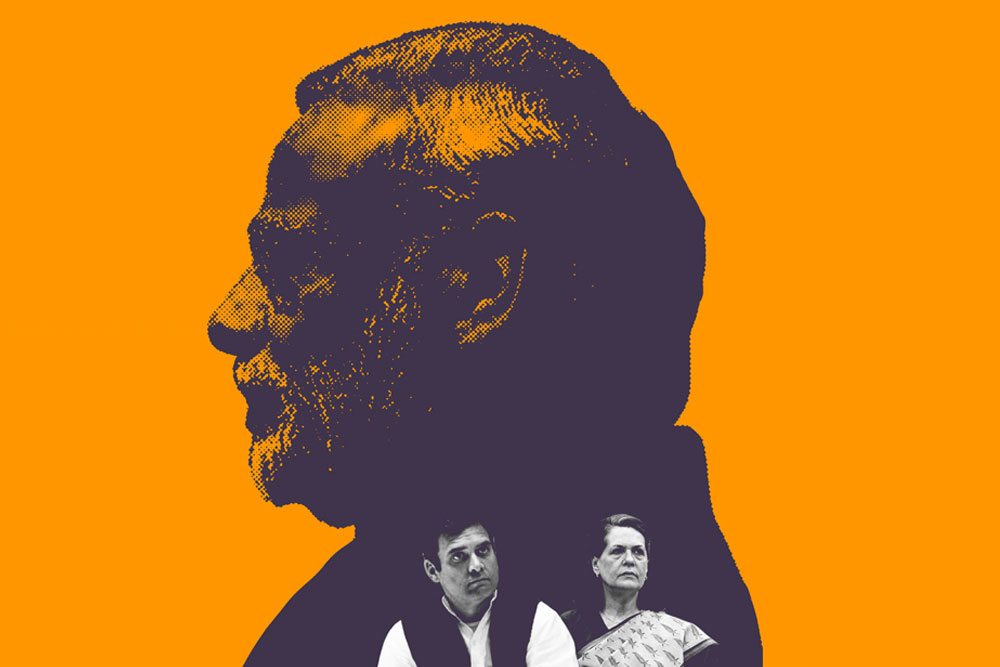 A WHIFF OF VICTIMHOOD adds to the aura of the singular leader. Convinced of history’s indebtedness to his destiny, such a leader lives in perpetual self-awareness, an extreme form of which is nothing but paranoia. When power is an inherited privilege, and where total submission is a prerequisite for loyalty, the fear of falling is a constant state of mind. The leader is a lone figure watching the shifting shapes of his own shadow. When the world shrinks around him, he sees phantoms, and enemies lurking in the corner. Mortality is a political inconvenience he is not trained to cope with. In falling, the finger still points towards the usurper who shattered the order.

Being a victim is very Gandhi today.

Maybe it is the least selling pastiche of a story of yesterday.

Then: Indira Gandhi’s covenant with India was political emotionalism at its rawest. Power in a way legitimised her sentimental ownership of India. She swung between extremes, the lows and highs of a leader whose campaigns, even as they were myth-making projects, never ceased to be intimate. Instinctive and impulsive, Indira, in power or in defeat, practised politics as an invocation of India, and it became intense in moments of adversity. Martyrdom was a motif as well as an anticipation in her politics, and even when she fell to her totalitarian temptations, she did not abandon her faith in the power of biography, and it was as if India was thrilled whenever a dash of evil was added to it. The idea of the enemy fortified her power—and her paranoia. Mother India soared in the churn of political victimhood, no matter if it was simulated or real.

Rajiv Gandhi did not play victim, and his reign was, even by Gandhi standards, very normal. There was no drama at Camelot, there was only the cosy confidence of being the chosen one. It was the nature of his death that sanctified the family mythology. In the end, as it was for the mother, the enemy became real for the son, and victimhood a natural inheritance.

Now it is a fake show staged by the defenceless: the politics of faux victimhood.

For Sonia Gandhi, her surname is still a shield as well as a struggle, an inspiring history as well as a bleak future. It is her only alibi in an India where, lately, all the news about big-scale corruption has acquired a ‘Gandhi’ angle, and the family immunity has weakened considerably. What is on show is simulated victimhood as a desperate leader’s last defence. She utters the stock responses such as ‘conspiracy’ and ‘vendetta’ in the face of mounting allegations of her party’s –and now family’s—involvement in defence scams. It is on occasions such as this that the solemnity borrowed from the original Mrs G cracks open to reveal a leader frightened by the erosion of the family mystique she once took for granted.

In another era, the poignancy of Mother India to a great extent remained intact even when Indira Gandhi was humbled. Today no amount of borrowed Mrs G-ism can hide the bathetic theatre of Mother in Law. As usual, it was Robert Vadra who contributed to the new embarrassment of the party, but this time, Sonia Gandhi did not evade the charges by invoking her son-in-law’s ‘private citizen’ status. By defending him, she was in a sense officially acknowledging party affairs as family matters. Maybe it was the most honest thing to do. When the last defence crumbles, and the last province rejects the Congress, family is the only refuge for a leader who was for so long protected by its legacy. Even in her harshest Indian summer, the family remains inviolable for her. The surname is her last mandate, perhaps the only one at this moment. What she does not realise is that this is not the same India that indulged the politics and passions of an Indira Gandhi. Indian politics for Sonia Gandhi is still a sporadic experience, as it is for Rahul Gandhi, whose Discovery of India is perhaps the longest journey to political adulthood.

It is India’s residual awe and the party’s total submission that sustain them, but such an existence has become increasingly tenuous. The Gandhi meltdown, like any other dynastic dissolution, is the bad ending of a great story. As bad as Rahul Gandhi, whose self-portrait as an angry shouter at large is as incompatible with today’s India as Sonia Gandhi’s victimhood. There was a time when Rahul was capable of playing the insider-outsider, the only Congressman in India allowed to have a mind of his own. At times, it was a mind that put the responsibilities of power above the pursuit of power. He could afford to play the house rebel, even at the cost of a humiliated prime minister. He was the extra-constitutional conscience keeper when his own party was in power. Today, adversity has no uses for him; he does not have a counter-argument to the one who is supposed to be the cause of all family traumas: Narendra Modi, whose slogan of a Congress-free India is being read by the family as a Gandhi-free India.

It is not a misreading. Modi in power is a repudiation of inheritance in power—and a celebration of individual aspiration. In an India conditioned by socialist instincts of the state and the legends of one family, Modi was everything that the political certainties of independent India were not. His success two years ago marked the official end of entitlement politics; it was the maturing of Indian democracy itself. His campaign was a direct challenge to the dynastic impulses that set the limits of power in Delhi. For the Congress, it was more than about losing power; it was about losing the legitimacy of its existence in a changed planetary system. In the family-controlled system, as in the socialist system, the individual is not autonomous, and his political growth rate is controlled. Modi 2014 was the usurper, the slayer who rose from the raw recesses of a democracy that was swaying for so long to the family song. The interregnums were too brief and incoherent to change the tune.

It is a change Sonia Gandhi is ill-equipped to cope with and Rahul Gandhi is incapable of comprehending. Modi is acting like a Shahenshah, said Sonia Gandhi while defending her son-in-law and questioning the second birthday bash of the BJP Government. The imperial pretensions of a commoner still irritate the Empress Dowager of 10 Janpath. There is nothing left for those who have lost the future except the illusions of yesterday, even if they happen to be the last empresses of a dysfunctional palace.