A Journey to Shiva’s Abode

The magnificence of Mount Kailash 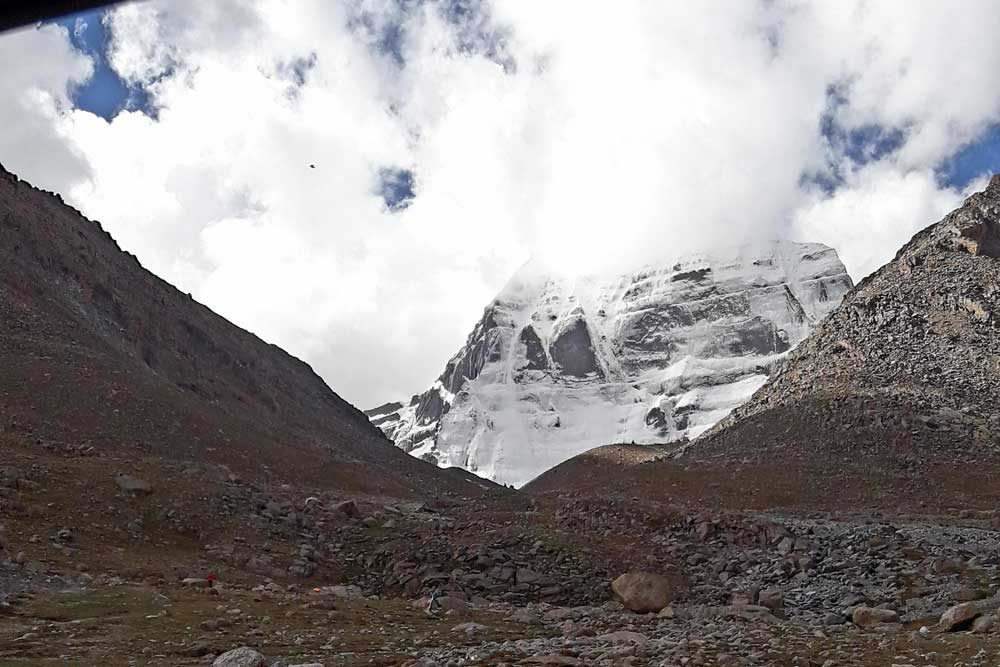 Divinity is everywhere, according to an Indian belief. However, there are places where divinities seem closer, stronger than in other places. Mount Kailash, the abode of Lord Shiva, is one such place on earth. Its remoteness, yet simplicity—the fierce sun, the soft snow, the blue skies, bluer lakes and most of all a primal peace that one can take away—makes Kailash-Mansarovar a place one yearns to return to, revisit after revisit.

Shiva. He is contradiction personified. A male god often worshipped as a phallic symbol. In His Ardhanareeshwara form that contains both male and female aspects, the left half is depicted in the form of a woman. Classical dancers, devoid of imagination, have depicted a hungry Ganapati lying on Ardhanareeshwara’s left lap and reaching with his trunk in vain for a breast on the other side.

In Sabarimala, arguably Kerala’s most famous temple, the deity is Ayappa, born of the union of Shiva and Mohini, the female form of Vishnu. Devi, the Mother Goddess is always with Shiva. Parvati was a reincarnation of His beloved wife Sati, who immolated herself because her father Daksha had insulted her beloved, Shiva. When he is worshipped as the Linga or in the phallic form, the base on which he is seated is that of the Mother Goddess, depicted as the Yoni.

Shiva is the perfect ascetic. Clad in leopard skin, he sits with rudraksh beads and a cobra adorning his blue neck, with the holy river Ganga seeping out of his dreadlocks. He is a true Yogi, with nothing but bhasma, holy ash, covering his body in the icy heights of Mount Kailash.

Satyaloka was Brahma’s abode, rising out of Vishnu’s deep and fragrant navel. Vishnu, the preserver, was in Vaikuntha, flanked by his wives and saints. He was the most pleasant, the most accommodating of the divine trinity, which went well with his job as protector of all creation. Shiva stayed at Mount Kailash, a gift from his doting father-in-law, Himavaan. In the patriarchal northern territory of India, it was unheard of for a husband to live with his wife’s family. ‘Jamai raja’ was the scornful epithet that was bandied about for such spouses. As though he cared!

At the beginning, the sleeping Vishnu heard a primordial ‘Om’ being uttered by the Mother Goddess when it was time for the next cycle of creation. Vishnu opened his eyes. A mystical lotus arose from his navel, wherein Brahma began his job of actual creation. The earliest form of Shiva was the roaring Rudra, who chopped off one of Brahma’s five heads as punishment for eyeing his own daughter, Saraswati, lasciviously. Shiva was born wild. He has no compunction in undertaking acts of destruction. Many people worshipped Vishnu. His Krishna avatar saw him interpret rules creatively to benefit his cousin-devotee. Vishnu understood the whole business of human existence and it was easy and normal for devotees to importune him for a good life on earth. True to form, Vishnu loved alankaar, or ornamentation. He wore yellow silk, jewellery, garlands made of fragrant flowers and had a flowing tilak on his forehead.

Whatever the arguments of competing sects, this fastidious Vishnu worshipped the bohemian Shiva, who in the stillness of his meditation concentrated only on Vishnu. Shiva too was a victim of divine discrimination. For a long time, Rudra was not worshipped by the so-called ‘forward castes’. They loved the story that Akash Ganga, or the celestial river, became fit to remove sins on earth only after flowing over Vishnu’s feet and having graced Shiva’s head. This, according to them, was the proper protocol.

Shiva’s rise to be part of the Hindu Trinity was as wreathed in mystic mists as his mountain abode. Kailash is sacred not just to Hindus. All around the mountain, Tibetan pilgrims, both men and women, are a common sight. They circumambulate the mountain, putting their feet where their head touches the ground as they prostrate around it. A 54-km journey, which takes an average of four days, is completed in nearly a month’s time. Many monasteries around the place are spiritual ‘gyms’ that enable devotees to complete their arduous pilgrimage on their knees. Often, they have to make way for donkeys carrying pilgrims and provisions on their backs along the parikrama road. The faces of many resemble the terrain. Chinese Buddhists also venerate Kailash as the seat of Milarepa, who attained nirvana in just one birth. They honour Indians as being people ‘who come from the land of Buddha’.

The clouds seems static and the snow-crowned peaks seem to float on the cold winds, doing a parikrama of their own, both clock and anti-clockwise. Sometimes, the clouds are heavy and grey with rain that falls in icy needles. Sometimes they are smudged, as if the mountain winds had blown on Shiva’’s ash-smeared forehead. Sometimes they are white and fluffy, as if they are on a recce for a landing spot. For a few minutes, the snowflakes resemble a pushpa abhishek or a flower bath on the proud brow of the mountain. The blue skies teach human eyes about beauty. The air at those heights is thin. Oxygen or the lack of it makes one aware of an activity taken for granted by us while sleeping, working, eating and even meditating—that is, breathing. The desperate need of adequate oxygen is almost a spiritual quest.

Shiva is also known as Panchabhootha Natha, or the Lord of the five elements. These are the building blocks of the entire universe. Shiva, after all, is the Lord of Dissolution. He would decide whether his devotees reach, enjoy and return from his abode. There are practitioners of Yoga who recite the Panchaakshara, or sacred mantra of Shiva, to ensure that their body stays in equilibrium even as they sleep because the human body (as any other matter in the universe) is made up of five elements. Even in sleep, atoms continue to vibrate at the frequency of the Panchaakshara.

Shiva was also the greatest of all dancers. His 64 kinds of dance was said to encompass the whole philosophy of creation, preservation and destruction. On Pradosham, Shiva danced for all the divinities. Vishnu sang for him. Nandi, Shiva’s bull, was on the percussion, Saraswati on the veena. Parvati’’s eyes never left her husband’s wondrous form just as Shiva’s eyes never left her gentle face. It was the subtlest art of lovemaking and the entire pantheon of gods were mesmerised. Shiva’s movements both as a dancer and as an adept practitioner of Yoga caused sweat to pour out of his body. This gave us the river Narmada. Believers take a dip in the Ganga as a must, at least once a lifetime. They also draw water from the Narmada, for this river from Shiva’s pores is also considered sacred.

Shiva was also fond of conversations with his wife on a vast range of subjects. There was domestic bliss at Mount Kailash, based on companionship as well as sexual attraction. What pedants see as mundane was elevated to the sacred, while divinity in turn permeated the ordinary activities of his devotees.

Shiva is also a teacher, a doctor, and an artist. His forms were varied, as were his moods. Aghora the fierce one to Shankara the benevolent, Shiva matched his wife facet for facet. Pouring water on his head easily propitiates such a complex god. The asterism for Shiva was Ardra (Thiruvathira); most people born under this have a tendency to catch colds and develop sinus trouble. Shiva, too, was vulnerable.

It is an esoteric secret that there are five Kailashams, the most accessible being Kailash-Mansarovar, which embodies the purity of a water body. The simile is questionable, but the stones look as if they are draped in a clear plastic film. This was the lake born out of Brahma’s mind, where the Mother Goddess descended to take her daily bath in the soft pre-dawn darkness. A near full moon looked on as if the Goddess was washing sindoor off her feet from umpteen kunkumaarchanas. The redness spread on the eastern side of Mansarovar.

The crescent moon is the only beautiful ornament that Shiva condescended to wear himself. This was more to save an afflicted moon cursed by his father-in-law to vanish, however. Shiva, it would seem, sympathised with those marrying women with difficult fathers.

Soon the moon takes on a tint of the snow. Did not the Ganga contain parts of the same snowmelt? Mansarovar was plated with silver. The higher the moon rises, the more generous its light. The whorls on the water look as if someone with long hair is floating on the surface. The swans on the have their own soft cries. There are no people around. The stars seem to slide down shafts of moonlight to join the Goddess in her bath. They pause on their descent, as if struck by her sheer beauty. This is divinity with no mediators.

Engulfed in the miracle of nature at its purest, manmade edifices like religion, geographical and financial boundaries, physical structures like temples, mosques, churches and synagogues seem so irrelevant. Aeons have gone by and aeons will come, as will people. The raw and regal magnificence of Mount Kailash will endure as Satyam Shivam Sundaram.