Back with a new vigour in his voice, he seems ready for a riveting fight in Parliament 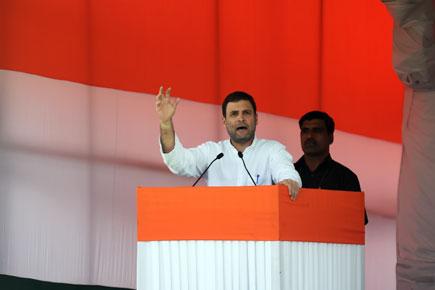 Day One of the Winter Session of Parliament has given us a gist of what lies ahead. And questions are being asked. Will the session be even more stormy and cankerous than the previous one? Will the Government this time be able to push its reform agenda? How much name calling, drama and wastage of public money are we going to see live on television?

Yet, it seems, one individual of the 543 Members of Parliament could turn out to be the focus of attention. And no, I am not referring to Narendra Modi. I mean Rahul Gandhi, sitting among his party’s 44.

Lately, Rahul Gandhi has generated and steered a lot of ‘good’ attention towards himself. He has been making a lot of noise—a lot more than usual—in what has become a politically volatile environment. The political greenhorn (#pappu) of this generation appears to have woken up from a long slumber. With a newfound political drive and added credibility, we have Rahul Gandhi Rebooted. He appears confident, strident and responsive, and is expected to build on the impression he left in the Monsoon Session that he has found his voice in Parliament. How much trouble will he create for Modi and his sarkar with his words and actions? Ever since the Bihar election results, he has displayed a new sense of determination. For once, he actually seems impatient, even showing signs of a man in a hurry to jump into the fray of hardcore politics.

It’s true that most politicians are either born or made but there are a few who are thrust into it. Jawaharlal Nehru’s great grandson is clearly in that last bracket. Born to the first family of Indian politics, it was more or less pre-written in his kundli that he had to take over the family business, with all privileges and liabilities, and he is now in no position to defy his astrological chart. There were no ifs and buts for him anymore.

Pushed to marry politics, he seemed highly reluctant for many years. Navigating the tricky terrain of politics in this vast country, on many occasions he looked out of place and ill suited for the journey. He tried to walk and talk like a politician. But few would take him, his job or his words seriously. Perhaps even he did not take himself seriously then. Alas, that attitude gave him an image of being indifferent.

The Congress party’s crushing defeat in the 2014 General Election must have served as a much-needed reality check. A shock such as this could call for a time out, which was perhaps why, one day in February 2015, the crown prince unexpectedly vanished. He was on a sabbatical overseas, it turned out, and when he returned after two months, Rahul Gandhi was not the one who had left.

Yes, the 45-year-old, a little more than a decade after entering politics, seems to have finally come of political age. The questions over his leadership as vice-president of the Congress, both within and outside the party, have started to wither. His travels around the country are now more purposeful, and when he takes up a local cause—of farmer distress, for example—he no longer sounds so out of depth. He lets no opportunity go to launch a frontal attack on the Modi Government, be it on matters of land acquisition, taxation, net neutrality or ‘intolerance’.

The difference that nine months can make is quite something. For someone who was being written off as a leader just a year ago, his resurgence is testimony to his recognition of the responsibility he bears as the heir apparent of India’s oldest political party. As a result, his grip on his position and the power that comes with it is now firmer than ever.

The second half of 2015 has proven a good year for him politically. It has coincided with the end of Modi’s first year in office, which is roughly the point after which the ruling BJP started facing flak for ‘Hindutva’ troublemakers. But the turning point was the recent BJP defeat in Bihar. Not only did the results show that the ruling party at the Centre would get no free run of state elections on Modi’s popularity, it gave the opposition a lift of morale that can be seen in the way Rahul Gandhi now conducts himself.

Last session, the Congress vice-president gave up his backbench presence in the House and started taking a front row seat instead. More importantly, he began participating in debates and other proceedings. He has been speaking with conviction at rallies and press conferences too.

The new vigour in his voice could serve him well in this session of Parliament as well. But he may not be able to sustain himself on that alone. Just as Popeye the Sailor needed to pop a can of spinach for a fight, he will need to keep taking his pep potion too—by staying grounded in the realities of Indian politics.