Narendra Modi: The Pursuit of Happiness 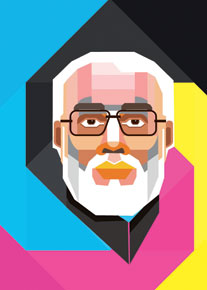 Here we are talking about the first year in the life of Prime Minister Narendra Modi, which is an act overlooking the truth that here we are talking about a man for whom every waking hour is a moment of discovery in a journey few politicians of his generation have undertaken with such nationalist gusto. One year ago, on coronation day, it was a pause in the relentlessness of a struggle, and as he took his oath as the 15th Prime Minister of India in the forecourt of the Rashtrapati Bhavan, around him lay the wreckage of an idea made redundant by the actions of India’s oldest political tradition. It was an idea of entitlement, and its accumulated pathologies had already turned India into a Republic of Thieves, presided over by a man who wasted his own essential decency by choosing to be a bystander as India sank in resentment. What made the evening of 26 May a turn in India’s political history was the triumph of a man whose faith in his own higher destiny was only matched by the anger of a people let down by the venality of a political class. He took the oath to be different, armed with nothing but his biography, reimagining an India that made him possible— and he promised that it would make other miracles, too, possible. We believed him. The future was irresistible.

One year on, he faces the gaze of a nation reeling under exaggerated expectations. Those who are looking for a re-run of the Modi Miraculous of his campaign days are likely to be disappointed. And those who are looking for transformation without dramatics are certain to be rewarded. India is already a different place, where the cultural shift is as visible as the mood change in the marketplace. A greater sense of national responsibility, awfully absent during the lost decade of the Manmohan Singh regime, has come to define governance, and for a democracy that has consistently been assaulted by its biggest beneficiaries, this is redemption. This is pure Modi; his entire career is characterised by cultivated austerity. And power accelerates his personal asceticism. The fabled Indian instinct for corruption has been contained by a new value system imposed by this ascetic. India is again a nation led, and the leader has become a shared inspiration in governance.

The leader, 12 months ago, stormed Delhi—he called it a ‘sultanate’—as an outsider. He loved that status, which was apt for him in more ways than one. Even in his own party, where he was chosen to be the candidate for India after he made himself inevitable, he created his own planetary system. Prime Minister Modi, as the Outsider Armed, may have internalised some aspects of the insider he had raged against as Candidate Modi, and that may be partly because the romance of the struggle against power is far removed from the reality of managing the power. Still, Modi’s Delhi is sustained by a new moral order, and it is the leader’s pragmatism as a modernizer, not his dogmatism as a Hindu nationalist, that has set the atmospherics. The socialist state may be in retreat, and the dismantling of the Planning Commission may have started the de-Nehruvisation of the State. Still there is no sign of a Modification of India on the scale of, say, the Thatcherisation of Britain in the last century. It is debatable whether his caution will eventually deny him the glory of being a conviction politician on the right side of history. Less ideological and more ideas-driven, Modi seems to be following the time-tested tradition that the centre is the ideal position for governance, particularly in a country like India, where a vast section of its people is too poor to share the hyperbole of an Asian power. The succour state is a necessity, though the socialist state is not the salvation for the poor. The Leviathan has to be downsized, and eventually, freedom in the marketplace will make a lasting difference in the countryside as well. For a 21st century conservative, the centre is a position between recompense and reconstruction. In one year, Modi has set the tone.

At home, the Prime Minister’s aloofness at times makes him inscrutable, and his adversarial—and occasionally condescending—relationship with the media makes it all the more difficult to read his mind (see the essay by Lance Price, the author of The Modi Effect, and the Prime Minister’s favourite foreign interlocutor). It is more transparent when he is in the company of world leaders. He is more aggressive—and bolder—in liberating India from the last vestiges of Third Worldism, and here, he is the true inheritor of Atal Bihari Vajpayee’s mantle, though he wields it with greater flamboyance. His hyperactive internationalism is the measure of a leader who is at home in a world of interconnected destinies, and no Indian Prime Minister since Nehru has played the part with such ease and focus. There is, after all, a vacancy for the Wise Man of the East, and who is better qualified to occupy that position than the leader who has been elected by the largest number of votes in a democracy? The list of countries in his itinerary grows at the same speed with which the shawls around his shoulders change colour. He has no competitors at this moment. India is the only robust democracy with an innovative spirit and a marketplace to match in the region; and Modi is the only one with the freedom to play out his ambition. (Xi Jinping may be the most powerful Asian but he is too caught up in the consolidation of power at Zhongnanhai to play the Oriental Sage.) Modi is loving it, at times with the exhilaration of a sightseer.

The idea of a global citizen suits a man who realises the limits of boundaries defined by isms. And such an idea should be incompatible with the provincial minds that feel empowered by the ascent of Modi. The mad mahants of Hindutva and other sundry votaries of an exclusivist Maha Bharat have already added a lot to the noise pollution of the misplaced culture debate, and thankfully, even if belatedly, Modi has said he will not tolerate any such nonsense in his name. The rise of Modi, to a great extent, is made possible by the redundancy of the Nehruvian ideal that, like any other socialist ideal, excluded religion from the political affairs of man. The Right, in its political articulation, has never been independent of religion, though never letting it encroach on reason. It is for Modi to make use of the Right space in Indian politics for a new order in governance. It is the space of the modernizer, not the playground of the medievalist. In the first year, his word prevailed. It needs to be heard frequently.

Achche Din, as sold by the Prime Minister, is an idyll. Let a new aesthetics of power mark the pursuit of happiness.