Let Kejriwal Revised Be a Man with Less Answers

This time, it was not a vote against any other leader; it was a vote for a man who should not be allowed to fail again 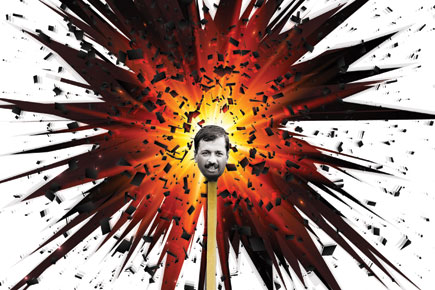 The moment will be mythicised in the national mind as many variations of freedom—or subversion. Is it the rage of one man, the man who came from nowhere and conquered the conscience, against the waywardness of politics-as-usual? Is it the spectacle of little truths defeating the big lies of the big bully state? Is it the determination of a people who won’t let the redeemer fail again? Is it the sign of a city bored with the grandiloquence of the One Who Is Invincible? Is it the day of the outsider sweeping aside the perversions and presumptions of the Establishment? Is it the story of the angry street all over again, a miniature Indian version of We the People, the original being the liberation rite in Eastern Europe circa 1989? Is it one of those rare occasions when the social classes are united by the common urge for change? Is it the case of that truism in politics—hunger for power— being reversed by the force of the ghettos: the power of hunger? Is it a vote of impatience, or a celebration of everyman’s ambition—and right—to be the ruler? Is it the Third Way, an alternative that is different from the predictable Two? It’s all that and more. The day of Arvind Kejriwal is steeped in the exclamations of hope and disbelief.

It all began when the cult of the common man, caught between hopelessness and anger, began to rise in Delhi. It was then a Delhi with the ruling class’ moratorium on morality. It was then that a portly satyagrahi with the simplicity of a village seer started his campaign for the conscience of India, and Kejriwal was there beside him, as mobiliser and mind reader. It was an India ideal for the amateur to put the professional politician, no matter whether he came from the Left or the Right, on trial. The politician on the Left of the national aisle was then floating in irrelevance and irresponsibility, and India was not on his mind. The UPA regime was immune to public disillusion—and to the intimations of history. It was sustained by patronage and pilferage. On the other side, in spite of the sight of a Narendra Modi towering over the House of Saffron, the Right was still in denial. It looked tired and tiring, and it was yet to formulate a winning argument against the party that abandoned India.

The timing was perfect for the amateur to storm the citadel of calcified certainties. He, the bespectacled revolutionary who looked so vulnerable, his topi announcing his origins, ‘Main hoon aam aadmi’, would, with admirable ease, turn the struggle against power into a struggle for power, thereby parting ways with his apolitical mentor, Anna Hazare. When the street fighter became the master of the streets, it was, in many ways, a show of what Václav Havel, the greatest of amateur politicians, would have called ‘the power of the powerless’. Chief Minister Kejriwal could not resist the temptations of the street. His fall would be celebrated by the faithful as martyrdom. It was not. It was not the stage fright of the amateur either. It was a public confession of his own redundancy as a ruler. Governance scared him, and, in retrospect, it was a comic-strip revolution that was not even funny in the end. And in the shattered ideal of Kejriwal lay a great betrayal: there was a man who let down a people who dared; there was a man who declared war on the profanities of power and he won only to fail.

That was then. The second coming of Kejriwal was a revised version of the revolution. It took place in the aftermath of a national insurrection led by another outsider. Kejriwal claimed Delhi when that outsider looked increasingly an insider, an Establishment man with a monarchical aura, to many of his erstwhile admirers. Kejriwal Part Two was a man who has learnt his lessons, and he uttered that magical word ‘sorry’. That needed courage, and a willingness to accept one’s own frailties and failures. This image of a repenting politician was a rare sight in a country where no man in power commits any mistake, and where the act of apology, even for the crimes of others, is an acceptance of guilt. This time, it was not a vote against any other leader; it was a vote for a man who should not be allowed to fail. It was a vote of idealism cutting across the classes, an act of faith.

So, can Kejriwal afford not to fail? Will he be able to buck the trend of the romance of revolution turning into a repudiation of the ideal, yet another example of the axiom that managing power is a tougher job than the struggle for power? Who changed more—Kejriwal or the people? I have my doubts, and the reasons are here.

– Kejriwal’s idea of India is the fantasy of a maha-panchayat, where every man, as he says, is a government, and where Swaraj is the abiding principle. This is not a manifesto of governance, but lofty rhetoric that is incompatible with the ideas and attitudes of 21st century India.

– His self-righteousness is frightening; he is a man without doubts, and speaks with the confidence of someone born with all the answers. When, in December 2013, I met him for an interview in his flat, he did not ever pause for an answer. It was as if he was reading out a text pre-written in his mind. When I asked him how he was going to strike a balance between the idea of resistance and the reality of governance, this was his response: “Frankly, we don’t have a magic wand. But we are confident that if we involve the entire one-and-a-half crore people in Delhi, there won’t be any problem that we can’t solve. There won’t be the ruler and the ruled. Now every single person in Delhi will become a government.” We would see that one-and-a-half crore governments in action: the horror of AAP’s referendum and the runaway Chief Minister.

– Who is Kejriwal? A Gandhian who wants to reform the state with his idea of decentralisation? A Marxist who wants to transfer the power of the state to the legion of the shirtless? A libertarian on the warpath, enraged by the transgressions of the state? We really don’t know. He is a collection of hazy self-definitions.

He did not survive Delhi’s last winter of discontent. Delhi still continues to indulge him. Arvind Kejriwal owes the city more than an answer.