Are Indian Hackers Any Good?

In light of the Chinese hacking into the Indian Government’s computers, a look at why India has not been able to raise its own army of lethal hackers. 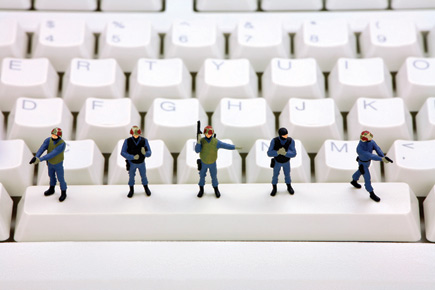 If the Chinese can hack into the Indian Government’s computers, why does India not have its own army of lethal hackers?


I imagine there is a pub in China where there is a giant screen that plays visuals of Indians saying the many things that only Indians say, and I imagine Chinese men all around rolling on the floor with laughter. What else can they do when we say things like, “Indian Chinese food is superior to Chinese Chinese”? It seems they now have a deeper reason to laugh when you consider the latest reports that say computers in China have hacked into the systems of the Indian Defence Ministry and of our consulates in several nations, compromising information on weapons, diplomacy, Naxalites and even the poor Dalai Lama. This exposes our digital naiveté. And that is very amusing, really.

One of our favorite national delusions is that in a South Indian city which is occasionally run by peasants, a town that does not have adequate power supply or roads, there resides a beast called the Software Giant. We imagine that our success as a cheap labourer who fixes and manages the innovations of others is a prelude to our eventual standing as a high-end software power. There is even a view that China’s goal of becoming the factory of the world is a blue-collared aspiration compared to our destiny as a cerebral force.

But the truth is, as in almost every sphere of Indian life, the cream of the truly gifted is very thin; beneath the top layer is a huge mass of plodders who cannot escape their own mediocrity because they are not groomed by an efficient system. Security observers tell me that this is the reason why India has not been able to raise an army of hackers even though outfits like the National Technical Research Organisation (a late child of the Research & Analysis Wing) have been trying hard to achieve that. There are not that many people with extraordinary skills, and there are no meaningful processes in place to groom the ordinary. “Also, there is in-fighting and mistrust among various intelligence wings,” a security expert says. On the other hand, the increasing sophistication of Chinese hackers points to an efficient and well-funded system there that identifies and trains serious talent.

A hacker is usually a brilliant programmer who can dismantle the elaborate and sophisticated defences of computer networks. A few years ago I interviewed several Indian hackers. Most of them were boys who at that time were too young to get married or vote, though they were not very interested in either. All of them had parallel lives, names and fame online, they could spend days on their computers, and they shared a mild hatred for one Ankit Fadia who they said knew nothing. I asked one of them, “Are you guys good, are Indian hackers any good?” A few hours after my story on Indian hackers appeared, I got a call from him asking me to check the online version of the story on the magazine’s website. Holding his call, I checked. The story had a rating of 12 stars out of a maximum of 10 stars. He said, “I can make it 20 out of ten if you want.”

I presume the stunt was his answer to my question if Indian hackers were any good. Some of them routinely hacked into gaming websites to win prizes like bicycles, or they made nice-looking girls scream in the middle of the night by making their CD drives open and close in a paranormal way. But for such cuteness, Indian hackers were never really considered a force by other hackers. That was because, they told me, they were not a single monolithic group; also they didn’t want to do any harm. They simply legalised their talent by becoming corporate security consultants and made a lot of money while they were still very young.

There were frail attempts by the Indian Government to recruit some of them. A 24-year-old boy was approached by someone claiming to be from ‘The Defence’. “He wanted me to set up cells of hackers who would try and break into important Pakistani sites. But finally when I told him that it will cost a few lakh, he said he will sanction Rs 5,000 first and send the rest in installments.” (There is no evidence to suggest that the caller was indeed from the Government.)

Today, I am told, there are several Indian hackers working for the Government, but they are still not an organised force. They await a system with efficient methods and clear goals, like most of us in our own worlds.