Contrary to popular belief, diabetes is no longer restricted to the affluent anymore. Some of the worst affected are those who have migrated from an active rural lifestyle to an urban sedentary job 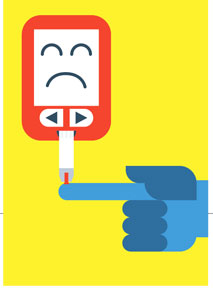 If you are an Indian, chances are that you have a family member or a close friend who has diabetes. That is, if you don’t have it yourself—such is the widespread nature of this condition in India. Latest estimates put the number of Indians affected by diabetes at more than 65 million; with another 70 million qualifying as pre-diabetics (a condition where the blood glucose level is above normal but not in the diabetes zone—implying that although you haven’t quite reached there yet, you are on your way). A recent study called CARRS led by V Mohan and Nikhil Tandon looked at more than 15,000 people residing in Delhi, Chennai and Karachi and found that at the age of 40, 10-15 per cent of these metro dwellers have diabetes. This figure increases to 40-50 per cent if we include ‘pre-diabetes’. And by the time we are 60, a mind-boggling 35-40 per cent of us are diabetic, and another 20 to 40 per cent are pre-diabetic. This means that two out of three Delhi and Chennai residents either have diabetes or are on their way to becoming diabetic.

Is diabetes a new problem in India? As early as 1500 BCE, Indian physicians described madhumeha, sweet urine. Later, Charaka described the disease in detail and was able to distinguish childhood diabetes, or type 1, from the more common adult variety, or type 2 (one cannot help but marvel at his observations and insights). So diabetes has been with us for a long time.

Is the problem getting worse? A 1972 study led by my mentor MMS Ahuja showed a prevalence of the disease in 2.3 per cent of urban Delhi population. This increased to 6.7 per cent by the early 1990s. A 2011 study (INDIAB) by ICMR across Jharkhand, Tamil Nadu, Maharashtra and Chandigarh showed a prevalence of 10 to 15 per cent in urban centres. There are some differences in the diagnostic criteria and methodology between then and now, but nothing that could skew the figures so substantially. CARRS data suggests that the prevalence of diabetes in Indian cities has gone up almost tenfold in 40 years.

Unfortunately, the problem is not restricted just to cities; the prevalence in rural India also continues to increase, albeit at a lower level. Also, contrary to popular belief, diabetes is no longer restricted to the affluent anymore. Some of the worst affected are those who have migrated from an active rural lifestyle to an urban sedentary job—say, that of a chauffeur. To add to the grim picture, the age at onset of the disease has also seen a decline. Twenty years ago, most patients with type 2 diabetes I treated were over 40 and it was exceedingly rare to encounter a 20-year- old afflicted with type 2 diabetes. Now, hardly a day passes when I don’t see an 18 or 20-year-old with typical type 2 diabetes. A recent analysis by my colleague Dr Ganesh Jevalikar of Medanta Medicity, Gurgaon, showed that among those who had onset of diabetes between the ages of 18 and 25, a fourth had type 2 diabetes rather than the usual insulin-dependent variety one would expect at this age.

Before we get lost in numbers and you start saying to yourself, “So what? I have high blood sugar and I feel fine”, it is useful to remind ourselves that uncontrolled diabetes often leads to complications. Managing these by dialysis, bypass surgeries, eye lasers, etcetera, are painful, unsatisfactory and very expensive. Can we afford these complications?

What, then, is sending us hurtling down this path? This dramatic increase demands an explanation and strategies to halt its march. Could it be that Indians are genetically more prone to diabetes? For example, we know that South Asians living in the US are more likely to develop diabetes than White Americans. However, this genetic difference cannot explain why diabetes prevalence has gone up drastically in the last 40 years. Surely our genes have not changed. Factors like lifestyle and environment are obvious suspects that are fuelling this epidemic. It is good to think of genetic susceptibility as a loaded gun waiting for obesity or an unhealthy lifestyle to pull the trigger. If we don’t pull the trigger, the gun won’t go off. Another analogy is to think of diabetes’ genetic susceptibility as a seed that needs fertile soil and a nurturing environment to take root and grow. The soil in this case is our unhealthy lifestyle and ‘obesity promoting’ environment.

Next month, we’ll discuss ways to protect ourselves from this tidal wave that threatens to engulf us. It is a big challenge, but much can be done. Data from the US indicates that efforts are paying off: diabetes complications are on the decline. Not all of it is difficult and some small steps in our diet and exercise schedules can help keep us safe. But the time to act is now.

(This is the first of a monthly column on health.)