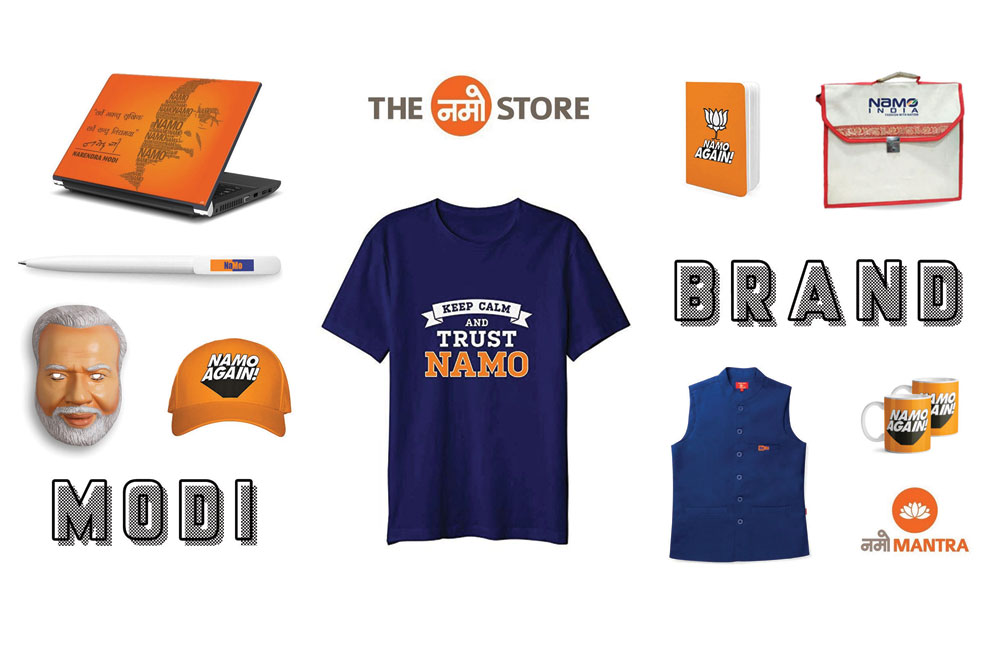 FROM A FACTORY in Tirupur, Tamil Nadu, James Silvesten churns out thousands of customised T-shirts each month, which he ships across the world. A big fan of Prime Minister Narendra Modi’s demonetisation drive, intended to rein in black money, among other things, Silvesten took to printing Modi T-shirts apart from the Tamil cinema tees he hawked regularly. Today, almost 10 per cent of the tees his company Teezbro sells have Modi motifs. “With the poll season round the corner, we have more [Modi] designs coming in in a fortnight, and we expect a quarter of our sales to come from there,” he says. At the moment, apart from surging domestic demand, he supplies to the US, the UK and France—in order of preference indicating the Prime Minister’s popularity overseas. And in the weeks leading up to the General Election, Silvesten expects “almost 75 per cent of turnover to come from Modi-related tees”.

Like Silvesten, a rash of like-minded individuals has been awakened by the election season to cash in on a probable second term for Modi. But what queers the poll merchandising market is the entry of a national political party, the Bharatiya Janata Party, for the first time in the selling game directly. Through the NaMo app, the Prime Minister’s flagship portal for public outreach and party affairs, the party is selling a wide range of Modi merchandise, such as tees, mugs, caps and pen drives. The merchandise comes embossed with ‘NaMo Again’ and ‘India Modi-fied’ messages and plugs government schemes such as Swachh Bharat, Make in India, Nari Shakti and Beti Bachao, Beti Padhao. The app says the proceeds of sales will go to the Namami Gange fund for rejuvenation of the Ganga. The BJP, in its turn, has urged party workers, MPs and MLAs to pick up Modi goodies from the app. A communiqué sent to party leaders by BJP’s central office reads: ‘Besides providing a platform to buy various articles, different historical flagship schemes of our PM… will be branded through this application, which will ultimately unite millions of people across the country.’

The platform hosted on the NaMo app is called FlyKart, with a striking resemblance to e-tailer Flipkart. FlyKart is described as a brand of Delhi-based company Firki Wholesale, which also owns shopping portal Daily Objects that vends wallets, stationery, home décor, smartphone cases and knick-knacks. While FlyKart has the licence to make Modi merchandise, BJP owns the intellectual property rights— a perfect revenue-sharing arrangement in which the split is hard to tell. “Two days ago, we started selling Modi jackets on the NaMo app,” says Tajinder Pal Singh Bagga, spokesperson of the BJP’s Delhi unit, but when quizzed about the returns, he promptly points to the vendor. “We’re a political party and at this juncture, we want more and more people to get the message [of Modi’s return to power] across,” says Bagga, who also sells Modi tees online via Tshirtbhaiya.com.

Between September and December, The Economic Times reported, the party notched up Rs 5 crore from merchanidse sales on the NaMo app. “The idea is to have a customer experience equivalent to leading e-commerce companies in terms of creative, brand equity, logistics and competitive pricing,” a senior BJP functionary told the newspaper. But the Modi merchandise got a real fillip only after BJP MPs took on the ‘Hoodie Challenge’ in December, when Himachal Pradesh’s Anurag Thakur and Social Justice Minister TC Gehlot tweeted selfies taken in ‘NaMo Again’ hoodies. Thakur, also the BJP whip in the Lok Sabha, went a step further and tweeted: ‘I’m wearing mine. Where is your hoodie?’ He tagged 11 other BJP leaders, including Health Minister JP Nadda, Information and Broadcasting Minister Rajyavardhan Rathore, Gujarat Chief Minister Vijay Rupani and Uttar Pradesh Chief Minister Yogi Adityanath. The tweet also urged them in turn to wear the hoodie and tag others. That started a chain reaction. Thakur himself got a response from Modi on Twitter: ‘Looking good, Anurag Thakur.’ The merchandise is also being promoted on the app’s Twitter handle, with people posing in NaMo gear bought on it.

E-tailers too seem to sense an opportunity. On January 14th, Flipkart had 1,296 Modi-branded products on sale; Amazon, 1,000, and PayTM, 1,040. However, on these portals mostly third-party manufacturers like Silvesten are putting up Modi merchandise. Offline, the official merchandise can also be picked up from BJP’s regional offices.

Though this is the first time the BJP is selling poll merchandise, it has never been averse to using it for campaign promotions. Before the 20o7 Gujarat Assembly elections, Modi masks melded into pop culture and became a feature at the then Chief Minister Modi’s rallies. In the 2014 General Election, the incumbent Congress-led Government’s ‘policy paralysis’ helped Brand Modi enormously. An Ahmedabad company launched the NaMo India portal in December 2013 claiming ‘the store is a collaborative effort of a group of volunteers’. It offered products crafted around the vision of ‘India First’, a phrase coined by Modi himself. While the initial plan was to distribute such merchandise free, products ended up being put on sale to gauge Modi’s popularity in the country and check how many fans would actually cough up money to wear their icon on their sleeves, literally. Again, in 2013, BJP party workers in Patna started NaMo tea stalls and backed it up with NaMo sweetshops in Saharsa, Bihar, during the Navratri Mela, where Modi was promoted as the country’s ‘future Prime Minister’.

That was then. Will ‘Modi Magic’ work now the same way it did in 2013-14? Back then, people vented their frustrations on ineffective governance by supporting a man who promised ‘maximum governance, minimum government’ and was known for mouthing memorable maxims, often beginning with an unending drawl of mitron (‘friends’). Down the line, ‘mitron’ has been replaced by the more gender-specific ‘bhaiyyon-aur-behnon’ (brothers and sisters), uttered rather rapidly. Derring-do schemes such as demonetisation and the Goods and Services Tax have their fair share of naysayers and even official unemployment has scaled a new high. Despite their best laid plans with party workers taking up the onus of hawking Brand Modi, the BJP may have an uphill task. But they remain undeterred. “Every party member should promote Brand Modi and it should reach maximum people,” says Bagga.

The BJP’s Modi merchandise pitch mirrors what has been an old feature of American presidency campaigns that flaunt merchandise straight out of their history books, such as Abraham Lincoln ribbons and Henry Clay (who stood for election in 1824) pyjamas. During their first President George Washington’s inauguration, attendees could purchase brass buttons that read ‘Long Live the President’ and ‘GW’. But in 1840, William Henry Harrison’s campaign gave merchandising a new meaning, selling brooches, china, handkerchiefs and replica log cabins. Ever since, poll merchandise like buttons, T-shirts, posters and stump speech clips and handouts have been part of the White House race.

Here, the hope must be that the Prime Minister’s re-election bid in the shadow of demonetisation doesn’t end up like US President Herbert Hoover’s (1929 to 1933), who laid siege on the Hill for a second term with collectibles like medals, badges, licence plates, autograph reprints, campaign ribbons and postcards, only to watch his popularity reel under the impact of the Great Depression.