Nipah: A State of Virus

It is yet another season of epidemic scare in Kerala. But Nipah defies medicine 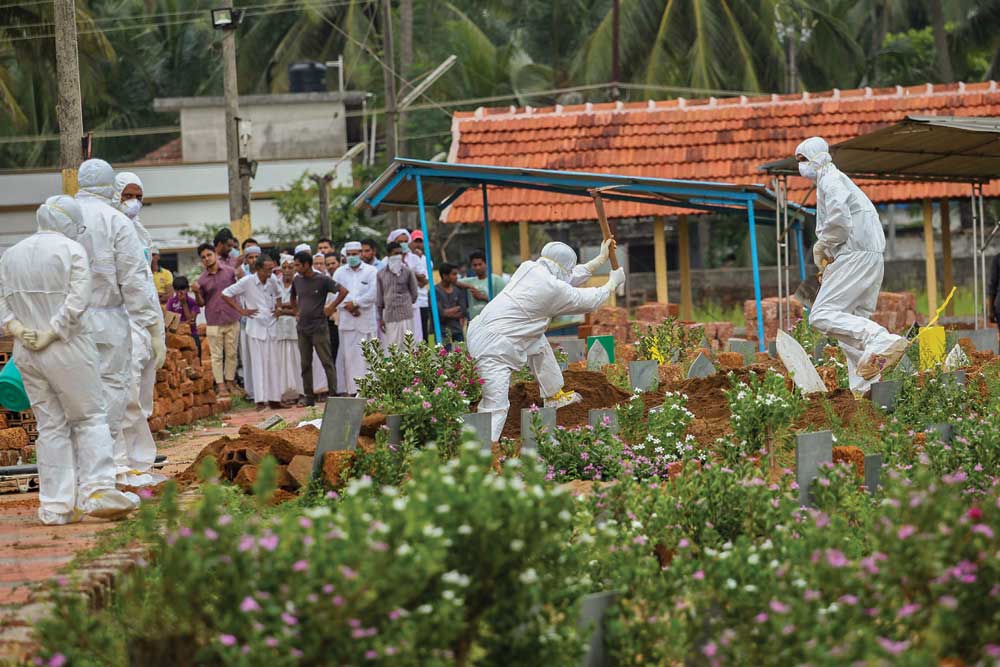 ON MAY 17TH, when the case of 22-year-old Mohammed Saliah came to the notice of Dr Anoop Kumar AS during his rounds at Baby Memorial Hospital in Kozhikode, he observed the following symptoms: high fever, severe headache, sore throat and nausea. It should have normally led to a diagnosis of encephalitis, an acute inflammation of the brain. But in encephalitis, typically the patient’s blood pressure and pulse rate go down, but the doctor noticed that it was increasing. Despite treatment in intensive care, Saliah’s condition rapidly deteriorated and he was soon in coma. After a discussion with his colleagues, Dr Kumar suspected that they were dealing with a new and rare disease, an unknown virus.

The team had only academic knowledge about Nipah at the time because there was no clinical history of the virus in the state. Further queries with relatives brought to the doctor’s attention that Saliah’s brother Sabith had also succumbed to similar symptoms a few days earlier at the Government Medical College Hospital at Kozhikode. “We also found that three of their family members had started showing similar symptoms. We urged them to rush to the hospital as soon as they could. Two were not even admitted to a ward, but directly taken to the ICU as their condition deteriorated in no time. We suspected two possibilities—either a new deadly virus or consumption of poison, given that they were all from one family,” says Dr Kumar.

Throat secretions, blood and body fluid samples of all the patients, including Saliah who died two days later, were sent to the Department of Virus Research in Manipal. Poisoning was ruled out and their worst fear was confirmed: it was Nipah, a virus that causes rapid and fatal respiratory and neurological disorders. It has a 70 per cent probability of killing a victim.

A meeting of experts and senior medical officers was convened at the chamber of the District Collector on May 19th and alerts issued. Mohammed Sabith, Saliah’s brother who passed away on May 3rd, was identified as patient zero. Within 20 days, three of his relatives also died. After the May 19th meeting, once the virus was identified, Medical College Hospital was in a state of emergency. “Initially, there was total panic. The Medical College is a place where hundreds of people come and go. The wards are too crowded to keep a record of the order of patients,” says Dr Arun Mangalath, a resident of the Kozhikode Medical College.

Suspected patients were immediately quarantined. Initial reports of infection confirmed it was not an airborne disease. Patients in the first and second circle of exposure were connected to each other. Apart from Sabith and Saliah, their father Moosa and paternal aunt Mariyumma also died. Three of the family in the first circle of exposure had first sought treatment at Perambra’s taluk hospital before being shifted to Medical College. Lini Puthussery, a taluk hospital nurse, was exposed to the virus and subsequently died. She left a heart-rending farewell note to her expat husband requesting him to take care of their children.

Janaki Amma, a 45-year-old, was believed to have been infected from Sabith when he was at the taluk hospital. Janaki Amma’s father-in-law had been admitted to the same hospital in the bed next to Sabith. When Janaki Amma stayed there to nurse him, she often went near Sabith’s bed and helped look after him as well. Janaki Amma’s sister-in-law also showed symptoms and was taken to a hospital, but she recovered.

“This is a very tough challenge for health workers,” says Dr Mangalath. “In my understanding around 30 among the dead in Bangladesh during the outbreak of this virus were nurses.” Resident doctors and nurses in the Medical College follow the protocol set by the World Health Organization (WHO) now, but there is also a social and emotional cost. “We have taken all the precautions. We are not scared either but you can’t imagine the plight of my family. People do not even dare talk to us. We are facing a kind of ostracisation,” says a staff nurse on duty in the isolation ward.

Fourteen people have died so far from the virus. Among the confirmed cases, three are still battling for life at the Medical College. However, the fear surrounding Nipah is decreasing and life is limping back to normal in the affected areas. It is too early to say that the outbreak has been contained, but the number of suspected cases has declined. According to RL Saritha, director of health services in Kerala, test results of 62 of the 77 body fluid samples sent to the Department of Virus Research in Manipal were negative. However, doctors are not yet ready to say the outbreak has been contained. “We have to wait and see. We should continue vigilance and observation for another month or two,” says Dr Kumar of Baby Memorial Hospital. But with the onset of the monsoon, managing Nipah is going to become harder for health workers as cases of other epidemics are expected to rise.

According to experts, it is a matter of pride for Kerala’s medical community that they could zero in on the virus after the second victim. This is not common even in developed countries. They unanimously agree that the government deserves applause for the prompt intervention that was instrumental in controlling the death rate. But it is no time to be complacent either. Early assumptions of bats being the direct source of the outbreak proved unreliable. Test results of 21 samples collected from different species of bats found in the locality turned out negative. Fresh tests of samples collected from fruit bats are in the process of being analysed, but so far the scientific community remains clueless about the origin of the outbreak.

Outbreaks of Nipah in South Asia, according to a WHO report, have a seasonal pattern and a limited geographical range. The report states: ‘There is strong evidence that emergence of bat-related viral infection communicable to humans and animals has been attributed to the loss of natural habitats of bats. As the flying fox habitat is destroyed by human activity the bats get stressed and hungry, their immune system gets weaker, their virus load goes up and a lot of virus spills out in their urine and saliva. Similar fluctuation of virus shedding may be associated with the stressful physiological conditions or seasons. Evidence of seasonal preference of transmission was recently demonstrated in a study in Thailand. The period April-June was the time (highest in May) when viral RNA could be mainly detected in urine which was associated with a fluctuation of population numbers that was observed only in May and correlated with young bats leaving to fly.’

As panic set in during the initial days of the outbreak, there were reports of people killing bats. “This is a very dangerous and foolish act,” says Dr Jinesh PS, a forensic surgeon and administrator of Info Clinic,a social media collective of doctors working for science and health awareness. “Bats are very friendly to human beings and insectivorous bats play a very crucial role in controlling harmful insects, including mosquitoes. If we turn against bats, we would be facing another season of Dengue or Chikungunya which are spread by mosquitos.”

Sooppikkada, a village in Perambra in Kozhikode district that was the epicentre of the outbreak, went through an upheaval in the early days. Many families left home and sought refuge in nearby villages. But authorities have been coming up with prevention strategies to deal with the fear.

Meanwhile, FIRs have been filed against Jacob Vadakkunchery and Mohanan Vaidyer, two self-styled naturopathy experts who argued that there is no virus called Nipah at all. Vaidyer even posted a video clip on social media of him eating fruits that he claimed was collected from the affected places and bitten by bats. Following legal action against him, he posted another video pleading mercy and withdrawing his claims. The number of patients quarantined is coming down, another good sign, according to experts.

The Myths and Reality About Nipah Virus