Padmavati: History as a Dispute

Blasts from the past strike modern India with unfailing regularity. The controversy over Padmavati focuses on the fact that what endangers freedom is the politicisation of protest in the name of freedom 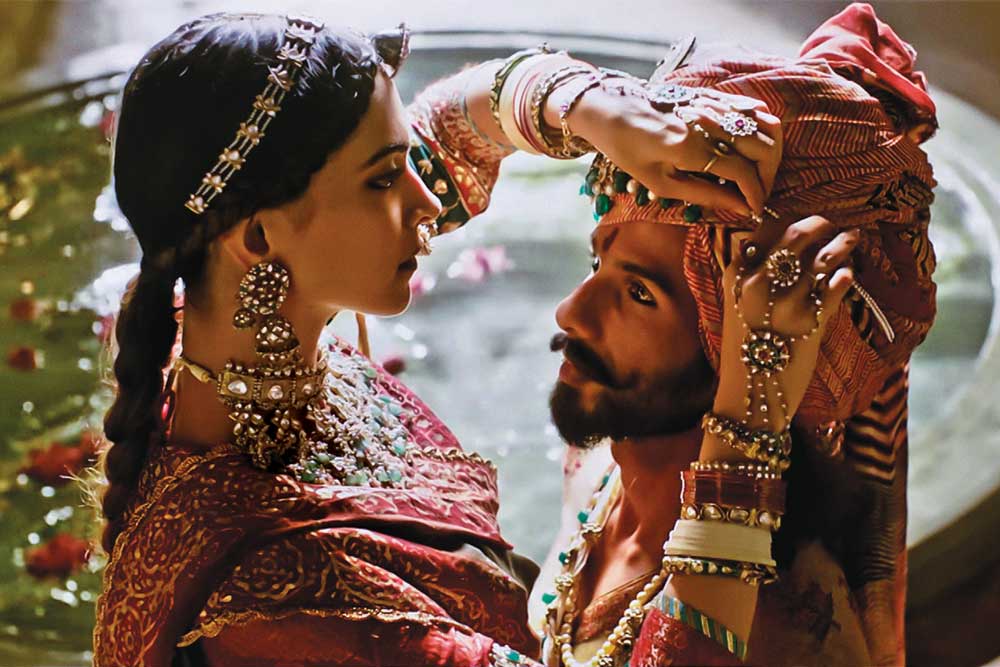 THESE ARE DAYS of rage in India. From the dunes of Rajasthan to the farmlands of Madhya Pradesh, Rajputs across this wide swathe of territory are up in arms against a yet-to-be-released film. Sanjay Leela Bhansali’s Padmavati is mired in controversy even before it reaches theatres. The way matters have panned out in the past one year— from its production on sets at different locales to its planned release in December—the film has been dogged by disputes from its inception.

In the past month, the Karni Sena, a fringe group of Rajput activists, has protested in different parts of India. Wherever Rajputs have a sizeable presence, these protests have gained traction. In many states—Madhya Pradesh, Punjab and Uttar Pradesh are examples—political support has been very forthcoming. Madhya Pradesh Chief Minister Shivraj Singh Chouhan and his Punjab counterpart, Amarinder Singh, have slammed what they claim is a ‘distortion of history’. Something similar has been said by Uttar Pradesh Chief Minister Yogi Adityanath. These political reactions are understandable: after all, the states where protests are taking place are large and often difficult to administer territories where politicians in power have to be careful.

The issue is now far beyond the realm of artistic creativity and the licence that can be taken on these matters. Politicians are busy countering each other on the ‘distortion of history’ and the alleged suppression of freedom in the country. These claims and counter- claims have much more to do with current political divisions in India than any artistic merit (or demerit) and what happened more than 700 years ago in a Rajput kingdom.

If politics over the issue is full-throated, the historical record around Padmavati (or Padmini) is muted. The details of the event—from the attack on Chittor by Alauddin Khilji in 1303 to the fiery end of Rajput women of the ruling house in a jauhar—are all mired in differing interpretations at different hands. Virtually no historians of that saga, from Amir Khusrau—who accompanied Khilji on the expedition—to Ziauddin Barani to the much later Colonel James Tod are in agreement on the basic facts. From the dates of the campaign to the capture and later fate of Ratan Singh—the ruler of Chittor—to the persona of Padmini, each historian has a different take. In fact, Barani and Khusrau are silent on the episode of Padmini.

Some 224 years after Alauddin died and 237 years after the siege of Chittor, the medieval poet Malik Muhammad Jayasi penned Padmavat, the epic poem from which the balladeers of Rajasthan and Tod borrowed liberally on the fabled queen.

In this liberal world, it is very easy to pin myths and ‘obscurantist’ groups together. But even historians and political scientists know how myths shape political perceptions and nationalism over time

‘Setting aside traditional narratives of the story, the bare facts are that Sultan Alauddin invaded Chittor in the year 1303 and after a hard fight of about eight months captured it. The brave Rajput warriors died fighting the invaders; the brave Rajput women perished in the flames of jauhar. Among those who perished was perhaps a queen of Ratan Singh whose name was Padmini. Except these facts, all else is literary concoction and lacks historical support.’ These words by Kishori Saran Lal in his History of the Khaljis are worth considering at face value. Lal was a leading member of the group of conservative historians who did ‘factual history’ based on a reading of contemporary records, memoirs and histories penned at that time. From the mid-1960s, they were increasingly sidelined by India’s ‘History establishment’ that came to be dominated by Marxist scholars. The latter group rarely wrote actual history, but was more interested in interpretation and revision. By the late 1980s, ‘scientific’ history dominated the country’s intellectual landscape and the past had been sufficiently sanitised, rendered safe and aligned with contemporary political concerns. Lal, who later wrote about the Ramjanmabhoomi controversy and temple destruction in Islamic India, is unlikely to embellish or distort facts, or carry out a creative re-interpretation of them. His careful delineation of the history of Alauddin’s expedition to Chittor and the destruction of that kingdom is in marked contrast to the cries of revisionism at the hands of politicians and fringe groups demanding a ban on Bhansali’s film.

But as Lal notes in his book, the myth cannot be dismissed out of hand as being devoid of historical truth. The kernel of what happened in the dark ages of Rajputana that faced a Turko-Mongol onslaught for centuries together—with great valour—is to be found in what Jayasi himself wrote. At the end of Padmavat, the poet says that, ‘In this epic Chittor stands for the body, the Raja (Ratan Singh) for the mind, Singhaldvip (Sri Lanka) for the heart, Padmini for wisdom… and Sultan Alauddin for lust. The wise can understand what is meant by this love story.’

In contrast to Western democracies, Indian politics is organised along group lines and not in terms of individual political choices. That makes competitive mobilisation on a controversy relatively easy. And no community is immune from it

In this liberal world, it is very easy to pin myths and ‘obscurantist’ groups together. But even historians and political scientists know how myths shape political perceptions and nationalism over time. Handling them requires sensitivity, tact and even-handedness, something for which India’s cultural establishment and intellectuals are not well known.

It is illustrative to compare the case of The Satanic Verses here, for there are some striking similarities between the two. In Salman Rushdie’s novel, the material for controversy came from writings of the historian al-Tabari (839-923 CE) who, in Tafsir al-Tabari (‘History of al Tabari’) highlighted the historicity of the Verses in question. Later interpreters, including the conservative medieval Syrian theologian Ibn Taymiyyah, re-affirmed these events. Yet, a ban on the novel was effected without ado. At that time, there was not a whimper of protest from the class that berates those who are angry at the fringe groups in the Padmavati case. Again, the uneasy response to the comparison between the two cases can be easily gauged: there can be no moral equivalence between these two, very different cases.

It is only fair to ask why Indians are quick to take offence at any transgression, real or imagined. At one level, the answer has much to do with how Indian politics is organised. In contrast to Western democracies, in India politics is organised along group lines—caste, religion, region and community—and not in terms of individual political choices. That makes competitive mobilisation on a controversy relatively easy. And no community is immune from it. To top all this, over much of Independent India’s history, governments have been armed with extensive power to ban books, films and other creative output at the slightest hint of trouble and, of course, anger. The record of liberal governments is, if anything, far worse than what conservative governments have ever done on this score. From Stanley Wolpert’s Nine Hours to Rama to Salman Rushdie’s The Satanic Verses is one continuous catalogue of abuse. It is this that makes the cries over Padmavati —which has not even been cleared for viewing, let alone being banned—egregious. Both sides, the alleged defenders of liberal values and those demanding a ban, are off the mark.

In practical terms, any demand for a ban—howsoever it may be couched—lies on a slippery slope. Any community in India can, and as history shows will, get offended on the slightest pretext. Since Independence, it is persons of a conservative bent who have been at the receiving end of the Government’s stick. Now that a conservative Government is in power, it is time to break this endless tit-for-tat, cycle. The rage against the film and its director and actors— especially the bounty placed on their heads by a BJP functionary in Haryana—is deplorable. Even if Rajput anger is understandable to an extent, such public intimidation is particularly nasty and in this particular case obliterates the distinction with other bigots who do the same in the name of their religions and communities.

The controversy has buttressed the already existing chorus of claims that ‘freedom’ and ‘dissent’ in India are in danger. If anything, the danger comes from liberal hypocrisy, the biased interpretation and denial of history that ultimately feeds such periodic outbursts. The institutional set-up to safeguard such freedoms is much more robust today. What endangers freedom is the politicisation of protest in the name of freedom.

In the immediate context, nothing has yet been done that should excite such anger on both sides. The Central Board of Film Certification (CBFC) is yet to issue a certificate for the film. Even if, hypothetically, such certification is not forthcoming or denied to the film, the filmmaker can appeal to the Film Certification Appellate Tribunal (FCAT) against the CBFC’s findings. Then, there are other judicial avenues for him to seek redressal. For all the hue and cry, even the first step has not been completed. For now the film’s release has been delayed, and given the political volatility around the issue, this may not be a bad thing in practical terms. But ultimately, the film must get a fair chance in the certification process. Whether it is a good film or not is best left to audiences in India and elsewhere.