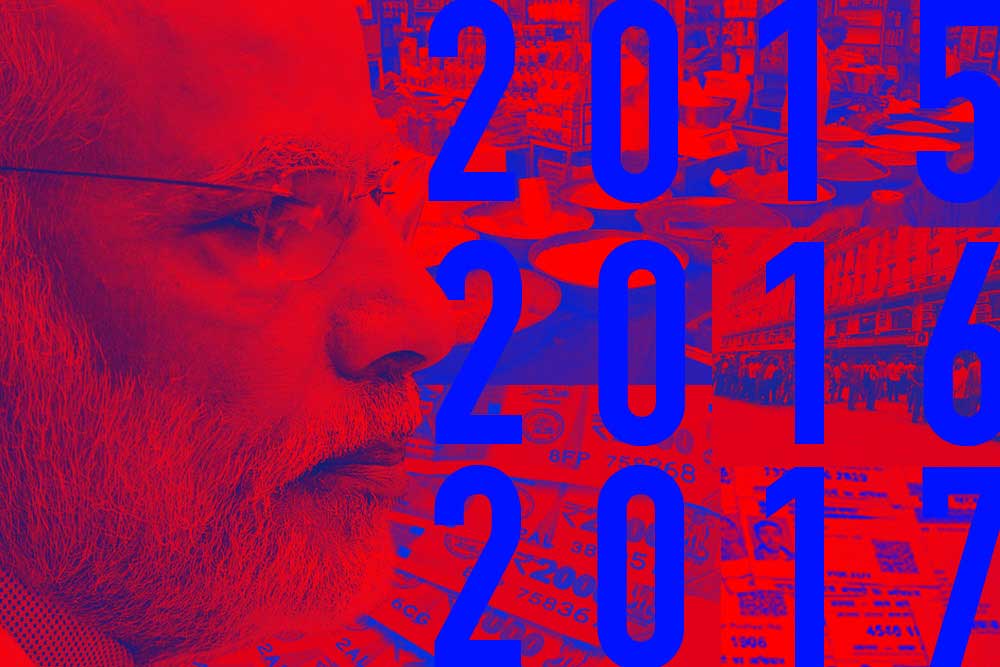 THREE YEARS IS a long-time for a Government in New Delhi. Usually, by this time two markers of political health are clearly visible. On the one hand, the number of errors of governance that creep into the day-to-day functioning increase to the point that there’s an air of immobility in India’s seat of power. On the other hand, expectations that bring a government to power usually evaporate by then. Both make a toxic mix that usually consumes the party in power in the next General Election.

By these measures, the Narendra Modi Government is an outlier on the country’s political landscape. The usual signs—corruption scandals, confusion in policymaking and, by the start of the fourth year, political panic—seem to be a distant prospect. Modi’s problems lie elsewhere: managing expectations that remain elevated. Perhaps this is a function of a clean government and a semblance of coherence in policymaking, something that has not been witnessed in India for more than a decade.

A look at Modi’s governance ledger shows that achievements outnumber unfinished projects. The latter are a cause for concern and merit elaboration. The two signature successes of the Modi Government—a silent, ongoing revolution in the delivery of services and the passage of the Goods and Services Tax (GST) law— cast it in positive light, even if the GST law has major blemishes to it. The passage of the GST law comes at a good time: usually it is accompanied by a lowering of growth in the year after its passage and a potential rise in inflation. Unless the reform is sequenced properly, it can have adverse political consequences.

The rush shown by the Centre to push the law—well before the 2019 election year—explains this. The trouble was that Modi had an unenviable trade-off to make: to go for an ‘ideal’ law, one that state governments would not let him have without brutal, time-consuming, give and take; or to clear a less-than-perfect law sufficiently ahead of the election date and ensure that its negative effects are mitigated by the time he begins his re-election campaign. Politically, he chose the rational course even if the economic benefit of the GST law will be a bit tempered. HSBC India estimates that an ‘ideal’ GST law would have led to a 1.3 per cent point increase in Gross Domestic Product (GDP) growth. Of this, roughly 0.3 per cent points have already been factored in due to state value added taxes (VAT). The potential loss due to multiple rates and haggling by state governments has slashed this further by 0.6 per cent points, leaving the existing GST law to deliver a potential increase in GDP growth of 0.4 per cent points.

This may look measly, and truth be told, the GST law is far from ideal. But what was finally approved reflects the messy reality of India’s politics that is still dirigiste in its moorings.

Modi’s other reform, delivery of benefits directly to Indians for whom they are meant, by using technology—the combination of Aadhaar, no-frills bank accounts and mobile phones—has been a bigger achievement. If anything, its impact has been underplayed. The use of technology to cut across a thick, parasitical layer of local politicians and petty officials in India’s far-flung districts is a novel political—and not just economic—idea. One part of the anger against Modi by liberal commentators is precisely due to the unhinging of local politics. The extensive use of Aadhaar is criticised in India’s intellectual circles in the name of loss of privacy and the creation of a surveillance state.

On the ground, however, the effect is different: from venal village headmen to the petty politicians in the zilla parishads, all are being driven out of the chain of skimming money from a large class of welfare programmes meant for the poor. An additional group that has been hit in this creative destruction is Non-Governmental Organisations (NGO)—who had become intermediaries in identifying the poor and needy. Politically, this hits regional parties and the Congress. So opposition on this score, while understandable for political reasons, makes little sense economically. This mode of delivery has the potential to cleanse the Augean Stables of Indian politics in the years ahead.

The Modi Government is an outlier on the country’s political landscape. The usual signs—corruption scandals, confusion in policymaking and political panic—seem to be a distant prospect

Between these two examples, and others not highlighted here, critics have drawn what seems a plausible conclusion: that the Modi Government devotes political energy and capital to projects and ideas that are not dangerous politically. The direct benefits transfer plan is painless because the opposition to it—barring the noise in Delhi circles—is diffuse. The GST law is what it is because Modi gave too much space to states and did not fight harder for a better law. What makes this implausible is that Modi has taken much bigger risks elsewhere. The demonetisation exercise was fraught with dangers that could not be anticipated in advance. The political risk was sufficiently high for any ordinary politician to back away. Modi did not.

So is there an explanation as to why Modi is not undertaking reforms that economists and a class of his—now somewhat disappointed— admirers have advocated for long: changing labour laws and eliminating the pernicious 2013 land law passed by the United Progressive Alliance (UPA)? Whatever be the causes of not undertaking reforms, most observers of Indian politics tend to blame the Prime Minister of the time—be it Modi or Manmohan Singh—for lack of progress on this front. To an extent, Modi’s critics have been unfair to him on this score. The Prime Minister did bring up the subject of reforms and some were indeed carried out, before they were parcelled out to the states for formulation and execution. The matter is a bit puzzling at the political level. For one, the set of people likely to be affected by such reforms— that includes freedom to hire and fire—are part of the Left ‘labour aristocracy’ that is not part of Modi’s constituency. For another, lack of such reforms is bound to cause problems in many programmes such as the ambitious plans to industrialise India and provide quality jobs to millions of Indians who enter the labour market every year—the so-called ‘demographic dividend’.

GLOBALLY, FROM LATIN America to Africa to Asia, the experience of economic reforms is that they are often halting or are not taken at all, until there is a crisis. The two routes to reforms are that either the country faces a crisis or that a new leader comes to power, one who plans to change the economic status quo. India has reformed under a crisis twice. Once in 1966 when it undertook a ‘limited’ reform to devalue its currency but did not liberalise its external sector. The 1991 reforms were sweeping in that they liberalised product markets by abolishing industrial licensing and slowly implementing financial sector reforms. In both instances labour market reforms were left untouched. These reforms were inconceivable on both occasions: in 1966 India was in the grip of socialism and even in 1991, the ideology had sufficient sway for these reforms to be ignored. In the years since then—after the muddled governments of 1990s—there has been a degree of ‘Left appeasement’ by the Congress in the 21st century, making them unviable. What compounds the problem is that it is much easier to organise a minority of workers in the organised sector and make noise while the ocean of workers in the unorganised sector are too diffuse and unorganised to demand better working conditions that can come about if labour market reforms are carried out. Put simply, if there is no ‘demand’ for such laws why should any government bother to ‘supply’ them? The brutal reality is that except for a handful of economists and commentators who regularly demand reforms, there is no political constituency that will back them. In real terms, the opportunity cost of not carrying such reforms is very high.

Three years down the line, what is remarkable about the Modi Government is its Centrism. This should be taken as a compliment, not a criticism. On the eve of his victory in 2014, Modi’s critics began painting a picture of doom, one more appropriate to biblical scenarios than a modern country. From hordes of fanatics running amok to vital freedoms enshrined in the Constitution being sacrificed, much ink, and lung-power, was spilled on gloomy prognoses. None of these have come to pass. If anything, India retains its noisy vibrancy and Modi’s critics have a free run.

So what went wrong in estimating the phenomenon? For one, there was too much focus on running down the man when in reality it is considerably harder for a single person, however powerful, to change a complex country like India. For another, India’s political history was ignored (wilfully?) by these critics. Modern India’s Centrism has deep roots that go back almost to its Independence. This has been due to five characteristics that were first spelled out by two University of Chicago political scientists in mid-1960s. For the better part of the last 70 years, class politics has remained peripheral (the sorry state of the Left attests to that). The ‘confessional majority’—the Hindus—have remained divided along caste and regional lines while minority politics and votes banks have remained politically potent. Backward castes and farming interests gained ascendency during these decades. Federalism, with states having an implicit veto over what the Centre could do or couldn’t do, slowly took strong roots, and finally India’s first past-the-post electoral system ensured political parties that hope to succeed in winning power do not veer too far from Centrist policy and political platforms. If there is one deep hand of history in modern India, it surely is a combination of these factors. These are the struts that hold the political trampoline even as the day-to-day gymnastics by politicians appear to shake the system wildly.

Take a hard look at the Modi Government in its third year and one can safely say that almost all these factors remain in currency. The only exception is the slight consolidation of the ‘Hindu’ majority. Even this can be discounted a bit; after all, Modi’s critics, many of them famous, once said that he only had the support of 31 per cent of the electorate. Is there, then, any surprise that his Government remains a strongly centrist one despite what the critics said in 2014 and continue to say now? This is not just a function of what kind of politician the Prime Minister is but also what kind of country India has been for a long-time. India’s economic problems are immense and need to be sorted.