Arvind Kejriwal: A Bitter Year in the Capital 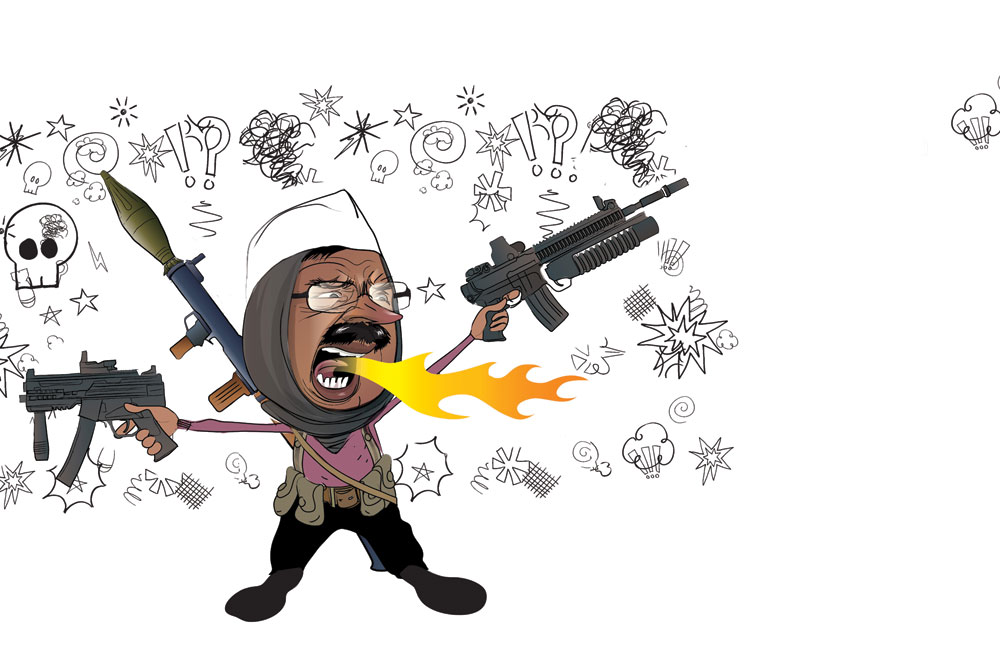 CHIEF MINISTER Arvind Kejriwal begins his day with an hour of yoga, followed by promoting positive stories about the Aam Aadmi Party (AAP) on social media. He is even more ardent about confronting naysayers who criticise his policies and question his intent, trolling them with tweets bordering on the obnoxious. Kejriwal does everything a chief minister should not and would not do. More than a year after being elected, he is as angry and bitter as ever and reluctant to shed his activist image. If anything, the crusader-turned-politician has now become his own propagandist. He loves the limelight and manages to trend on Twitter by training his guns on the media, politicians, corporate executives, bureaucrats and policemen. No one escapes his wrath—not even Bollywood.

Kejriwal has already figured out his next PR move. The Delhi Government is about to put up the draft Bill for complete statehood of Delhi on its website for public opinion. Knowing full well that such a proposal will need the Parliament’s approval hasn’t stopped him from drawing attention to it. Because after the matter of the Prime Minister’s degree has died out, he needed a new issue to brandish—outcome be damned. Kejriwal had alleged that the Prime Minister’s Master’s degree from Delhi University is fake. The university has announced that it is genuine.

“He doesn’t take his role as chief minister seriously,” says his friend- turned-foe Prashant Bhushan, a senior lawyer. “He is completely anarchic in his functioning and wants others to follow him. But this is not what the people of Delhi voted him to power for.”

Kejriwal’s actions may be open to interpretation, spawning a thousand memes and making him the butt of jokes, but they are a means to an end. Soon after taking over as Chief Minister of Delhi, he crossed swords with Lieutenant Governor Najeeb Jung. “He (Jung) doesn’t give time to even Deputy Chief Minister Manish Sisodia for a meeting or take his calls,” said Kejriwal in an interview. “But if a chowkidar of Amit Shah calls him, he will crawl and go. He is acting like a poll agent of BJP.” Jung was quick to comment: “May God for give him for he knows not what he says.” It had all started with the Lieutenant Governor appointing Shakuntala Gamlin, the Delhi power secretary as acting chief secretary. Kejriwal took issue with the appointment, contending that only an elected government should have the right to choose a chief secretary. The Opposition sided with the AAP as it was an opportunity to target the Modi Government. The issue, however, could have been resolved without high drama. “The politics of personal allegations, brinkmanship and the dragging of the bureaucracy into petty political fights is unfortunate,” says Yogendra Yadav, former AAP leader. “But if you want to divert attention from the real issues, it works.”

Even as he was engaged in a verbal war with Jung, Kejriwal found another target in Delhi Police Commissioner BS Bassi. The police, which come under the purview of the Central Government, had arrested two AAP MLAs. This was enough to trigger Kejriwal’s wrath. Accusations were made by either side and the argument seemingly ended with Bassi’s retirement in February this year. In July, Kejriwal rekindled the issue and referred to the police as ‘thulla’ (a derogatory term) in a TV interview. “If a thulla of the Delhi Police asks a roadside vendor for money, a case should not be registered against him, this is not acceptable,” he said. The disparaging comment drew sharp criticism from all quarters and resulted in two policemen filing two different cases of defamation against Kejriwal over the use of slang. The case is still going on in the respective courts. “I believe all institutions and instrumentalities of the state must have respect for each other,” said Bassi. “I refuse to believe that the honourable chief minister has said any word of this sort.” But he had, in a not-so-honourable bid to occupy the limelight for a brief while.

When Delhi was outraged at the rape, in October last year, of two minor girls, Kejriwal quickly shifted the blame to the Modi Government, harping on the fact that policing was the Centre’s job. “I am no Sheila Dikshit. I won’t let even the PM sleep peacefully,” he told the media. Bassi retorted that rather than blaming the police, the state government should do what is in its power, such as setting up crèches so that mothers don’t have to leave their children behind at home to go to work. “He (Kejriwal) has not been able to stop corruption in his six-men Cabinet and he should not be telling others how to do their job,” Bassi said.

“All politicians pick fights. That is not the problem,” says Bhushan. “But there is a set standard that one can’t stoop lower than this. In his case, there is no standard.” Kejriwal wears defamation suits like badges of honour and his favourite targets include Prime Minister Modi, Finance Minister Arun Jaitley and Congress leaders Sonia Gandhi and Rahul Gandhi. In 2014, he included transport minister Nitin Gadkari on a list of India’s most corrupt politicians and a defamation case followed. Pawan Khera, Sheila Dikshit’s ex-political secretary, lawyers Amit Sibal and Surender Sharma have filed similar cases against him. The most recent case was filed by Arun Jaitley in December last year. Jaitley had accused Kejriwal and other AAP leaders of running a false, malicious and defamatory campaign against him and his family members for political mileage, causing irreversible damage to him. Kejriwal had sought retribution after the CBI raid on his principal secretary Rajendra Kumar on 15 December in connection with a corruption case. The act was later slammed by a court and the matter was raised in Parliament. But in the wake of the raid, AAP leaders including Kejriwal saw fit to respond with counter-allegations against Jaitley of siphoning off money from the Delhi and District Cricket Association (DDCA) during the time he was president. Kejriwal went a step further, calling Modi a coward. “Modi is a coward and a psychopath. When he couldn’t handle me politically, he resorts to this cowardice,” he said. Sanjay Kumar, Professor at the Center for the Study of Developing Society (CSDS) finds this strange. “What the CBI did was wrong, but there should be decency in criticism,” he observes. “Kejriwal is smart. He knows his support base well and plays accordingly.”

As Chief Minister, he does not hold a portfolio, leaving much of the government’s day-to-day functioning to Deputy Chief Minister Manish Sisodia. Instead, he is both seer and overseer, watching over his government and singing its praises to the people. Between February and May this year, the Delhi government published print ads worth Rs 14.5 crore with a daily average of Rs 16 lakh. A lot of this spend included ads in newspapers published and read outside Delhi, such as in Kerala, Karnataka and Tamil Nadu. “Ads in Kerala, Bangalore and Chennai are not of concern to the people of Delhi, nor are they of any benefit to the people of those towns and cities,” says lawyer Aman Pawar who got the information through RTI. Pawar is yet to get a reply on the AAP government’s ad spend on electronic media but estimates it to be around Rs 100 crore. “There is no harm in informing people about the work done by the government. Kejriwal does it because the pressure on him to perform is much higher than on any other chief minister,” says Professor Sanjay Kumar.

Some of these ads serve to reinforce ill-advised policies. The second phase of implementation of the odd-even rule, for instance, saw a month-long publicity campaign across TV channels and radio stations. “There is no scientific evidence to prove that Odd- Even is a successful formula for pollution control,” says Prashant Bhushan. “But Arvind is adamant on cashing in on it by spending money on ads. This is not your money which you can spend at your fancy.” In fact, Kejriwal’s unyielding position became apparent every time someone debunked the policy. A Hindi newspaper journalist faced his ire on Twitter when he criticised Odd-Even. Kejriwal openly asked the paper to fire him and AAP supporters threatened the journalist on Twitter.

FOR SOMEONE WHO has made a career of refuting political mores, Kejriwal does not tolerate dissent against his government. On 19 April, while addressing bureaucrats in Delhi on Civil Services Day, Kejriwal came down heavily on IAS officers who had called a one-day strike on 31 December last year against the removal of two officers by his government. Almost in a threatening tone, he advised officers to mend their ways and to support his agenda. “People are happy with the performance of our government. And if we continue to function like this, our government will stay here for at least 10-15 years. Someone may like it or may not like it. Those who are above 45, they don’t have any option. Only we are for you,” he said. “For those below 45, you get transferred somewhere or resign. If you are here, you have to follow the agenda of my government.”

Some observers say Kejriwal is redefining the idea of the chief minister. “He is trying to give a new idea to the role of a CM, a people’s- choice CM, a vigilante in an inspecting role rather than in the legislative and power broker role which we are used to seeing,” says Shiv Visvanathan, a political analyst. “He needs to communicate it in a better way and I think that has been his problem in recent times.” Those who have worked with him, however, say he is not as principled as he seems. “He is totally unscrupulous and ready to use unethical means to serve his purpose,” says Bhushan. “In the 2013 Assembly elections, when he needed a few more seats to form the government, he even tried to create a rift in the Congress.”

When Kejriwal challenged the cosy arrangements of politics with his irreverent oratory, the people fell in love with the antagonist. After the election, the rhetoric never translated into action, at least not for the middle class. His freebie raj, however, has endeared him to the poor. With eyes on Punjab, he needs to keep the momentum going, if not with his work than through his PR antics. His predecessor Sheila Dikshit has a warning for him. “It is high time he gave governance priority over sound bytes,” she said. “He is complaining the way he was when I was the CM.” Some things never change.