In Modi’s India, the maximum leader is the most dutiful nationalist who makes the best use of democracy 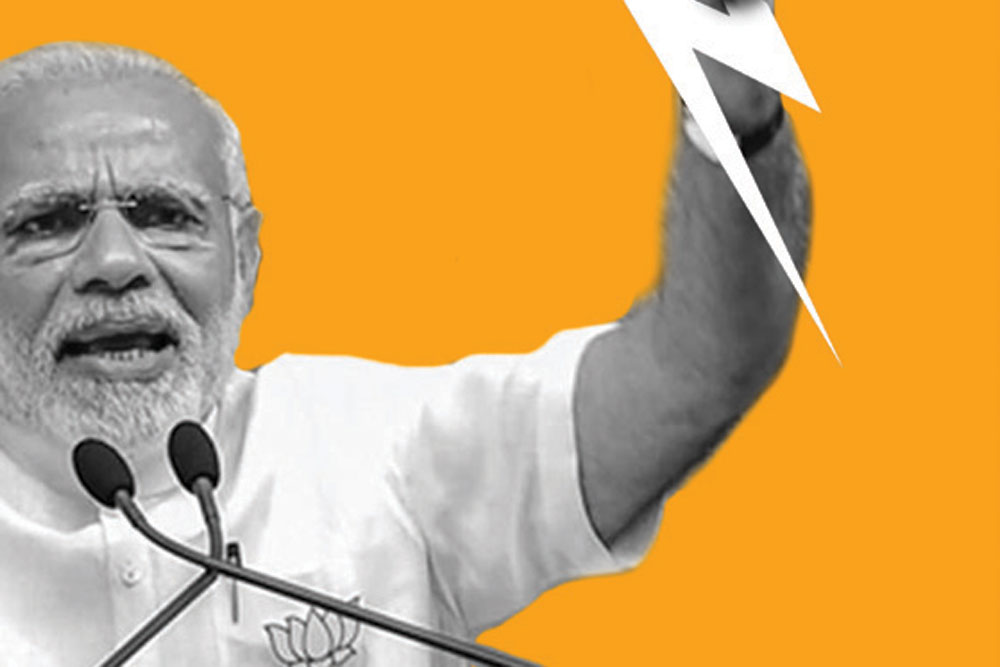 CELESTIAL HEROISM IS a bestseller, unless it is badly made. In it merges great survivor dramas and the romance of breaching the boundaries of human endeavour, the sheer joy of floating in the unknown and the sudden surprises of secrecies. Space is the preferred location for the mythology of power.

It is a powerful metaphor when played out by someone who believes that power is the essential requirement for change, that the pursuit of power is the foremost political responsibility. Power is not an idea. It is action.

India became a space power with satellite-destroying capabilities on March 27th, and joined the exclusive club of the US, Russia and China. Prime Minister Modi himself made the announcement after a suspenseful tweet. India is not for the weaponisation of space, he has assured the nation even while projecting India as an invincible missile-wielding space power.

The image is the message, certainly at a time when India is experiencing safe-hands nationalism in an election season. In the fray, the candidate who continues to remind us that we need the sheltering shadow of the redeemer-protector is challenged not by another candidate with an alternative vision but by a conglomeration of he-has-to-go negativists. When the Candidate plays out the power script—a Balakot slayer, a satellite destroyer and a demeanour of India-is-my-only-duty— the other side sticks to the refrain of power-is-evil.

It is this contrast that updates the idea of the leader we are witnessing on the stump today. The redeemer-protector is a familiar figure in places where ‘populist’ has become the default adjective to politics. He is everything that the populist era has made inevitable: the strongman, the outsider, the nativist, the restoration artist, the greatness seeker… He is the apostle of the Nation First. And invariably, he is either a paranoid autocrat or a decisive democrat.

For the autocrat, the nation is in a permanent crisis, with the enemy camping at the door. It has always been the case, from the simulated doppelgangers of the totalitarian state to the inferior races of national socialism. The immediacy of the enemy makes the dictator’s life easier. The current crop of autocrats in power are products of faux democracy, whether it is Recep Tayyip Erdog˘an of Turkey or Vladimir Putin of Russia.

It’s the military-secular strongmanship of Ataturk that is being replaced by the nationalist-religious strongmanship of Erdog˘an, who sees himself as a moderniser blessed by God and the nation. Turkey has perhaps one of the largest gulags in a faux democracy.

In the Putin country, the redeemer-protector draws his power from the exaggerated grievances of the nation. The new tsar, too, is a product of faux democracy, and Putin’s autocracy borrows from the Soviet past that shaped his idea of power and authority. His brand of nationalism is powered by an accumulated sense of hurt. So the West is the convenient enemy—and the spy who is corrupted by the West is worthy of Polonium-210. It is difficult to figure out why a section of the Indian Right worships Putin. (In another time, the Indian Left found its heroes in the Castros and Arafats; today some from the Indian Right fall for other misplaced icons.)

Maybe it is the strongmen fetish in faux democracies that provoked the Oxford don Archie Brown to title his book The Myth of the Strong Leader: Political leadership in the Modern Age (see ‘What Kind of Strongman Does India Need?’, June 9th, 2014). He argues that one should not be blinded by charisma or swayed by the domineering leader, that a collegial style of leadership is not a sign of weakness. The transformational leader doesn’t have to be a strongman, the professor says.

The transformational leader can be a strongman too. A decisive leader with the legitimacy of a functional democracy. When Modi portrays himself as the narrator-protagonist of the new Indian space odyssey, it is just another face of the post-Balakot strongman, once again playing the nationalist safe hands. All strongmen have an unshakable faith in their own individual exceptionalism, which in faux democracies becomes me-alone paranoia. Modi too invests so much in his individuality, and it is his personal aura, not the party machine, that makes all the difference. The faux-democracy strongman has absolute power because power is absolutely independent of popular will. The democratically legitimate strongman believes politics is all about the pursuit of power—and transformational leadership is about the nationalist management of maximum power. In another India, in another time, maximum power meant maximum entitlement. In Modi’s India, the maximum leader is the most dutiful nationalist who makes the best use of democracy. The limit of his strength is set by institutions, not his fears.

That is why, in General Election 2019, the fight is between the struggle for maximum power and the struggle of marginal power.