Sorry, Modi is Not One of Them 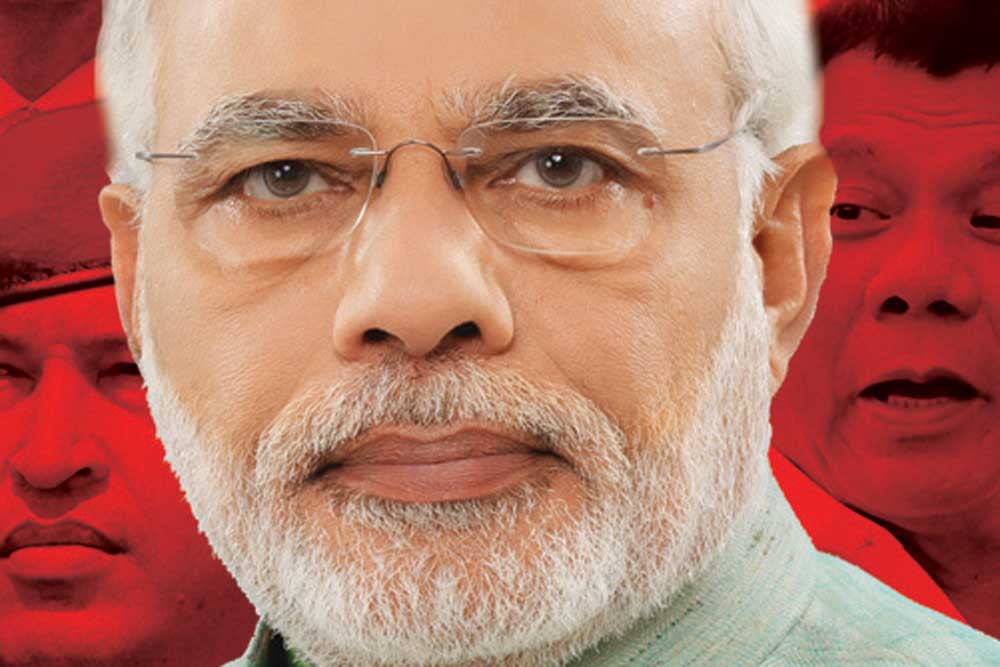 THEIR TRIBE IS multiplying, and their pathologies are a pointer to the darkest possibilities of populism. In the Philippines, President Rodrigo Duterte “would be happy to slaughter” drug addicts. He cares for national hygiene. In spite of horrifying portraits in international media of the latest exotic despot from Asia, his popularity is apparently intact. In Venezuela, President Nicolás Maduro is playing out the last script of Chavismo, the legacy of his predecessor Hugo Chavez. Seeking socialist immortality, he intends to be the sole controller of the country. Inspired by the ghosts of Castro and Chavez, and tapping into simulated anti-Americanism, it is socialist nationalism at play. He is the strongman as a poor pastiche of a Marquezian dictator. In Egypt, President Abdel Fattah el-Sisi, lately bromanced by Donald Trump, is the restorer of national stability. The former General has become the face of post-Mubarak Egypt’s transition from Arab Spring to Arab Chill. He enjoys mass support. In Turkey, President Recep Tayyip Erdoğan is using a referendum, a trusted instrument of strongmen, to turn the current parliamentary system into an executive presidency. If he wins a ‘Yes’ vote, Erdoğan, whose paranoid politics of development has the jails swelling with deviants, will officially build his cult on the last ruins of Kemal Ataturk’s constitutional secularism. He is a popular leader, nevertheless. And President Vladimir Putin of Russia is arguably the world’s most powerful maximum leader, the man with the licence to flout any law or international norm to maintain order at home and regain the glory of his homeland in history. He taps into the ancient grievance of a people who believe that the West has taken the undeserving lead.

This is the strongmen’s hall of fame, and the way the world is behaving, the populist upsurge is likely to add new names. I haven’t included Trump because what we see in his swagger are the delusions of a man without a mind presiding over the great American disorder. Now there is an increasing tendency—it has been there since the summer of 2014—to include Prime Minister Narendra Modi on the list. For some swayed by the possibilities a comparative study of strongmen offer in understanding the emerging leadership of our time, his political genes have striking similarities to the Putins and the Erdoğans. What prompt such comparisons are his faith in himself as a man destined to change a country savaged by corrupt administrations of the past, his overwhelming emphasis on an India of unrealised greatness, his stump poetry on the nation, and his unwavering belief in the uses of power. These are the traits of a domineering leader, and even in a parliamentary system, a leader, by the sheer force of his personality, can dominate without extra-constitutional methods, as Lady Thatcher did. And even in a presidential system, a leader can be a wimp or a philosophising ditherer, as a Carter or an Obama was. The so-called strongmen, who attach national destinies to their paranoia, make use of sham democracies to legitimise their autocracies.

Modi is not one of them. Two names that are lazily invoked to add an autocratic aura to the Prime Minister are Erdoğan and Putin. Both are misplaced, ahistorical comparisons. Elected by a popular vote, Modi has not recast the institutions of a civil society to perpetuate the cult of the One. Neither has he officially initiated a nationalist order to override the little, eclectic traditions of India. And it is such a reassuring thought that India is still one of the noisiest places of dissent, political as well as cultural. There is indeed a trend of cultural mobilisation, lumpenised by the newly empowered fringe, that unsettles the secular idyll as seen by urban India. The Hindu kitsch is fast becoming the aesthetics of the cowbelt; it is not the policy—or politics—of Modi. He has not launched a Hindu National Mission, and if a sanyasi has become the Chief Minister of India’s most influential state, blame it on a democracy whose diversity at times can be alarming. Even seasoned alarmists are likely to concede that the mandate of Modi, won on the promise of a bright future rather than on a perfumed past, has in no way been turned into a licence for saffronising India. The gulag for meat eaters exists only in the fantasy of the conscience keepers of a lost India. We may have a leader constantly aware of his own aura as the Prime Redeemer of India; we haven’t yet got an autocrat chasing shadows and perpetuating extra-constitutional domination.

What we are witnessing is the ungainly sight of dissent desperately seeking a theme. A theme as powerful as Modi. It is thrilling to be on the other side of the argument, as long as you are not in real strongman countries such as Russia or Turkey or Egypt, and the argument is compelling when you get cosily trapped in what a great writer who knows a few things about the price of dissent calls the ‘auto-culpabilisation machine’. The difference is, the Indian version of the machine is invented outside history.