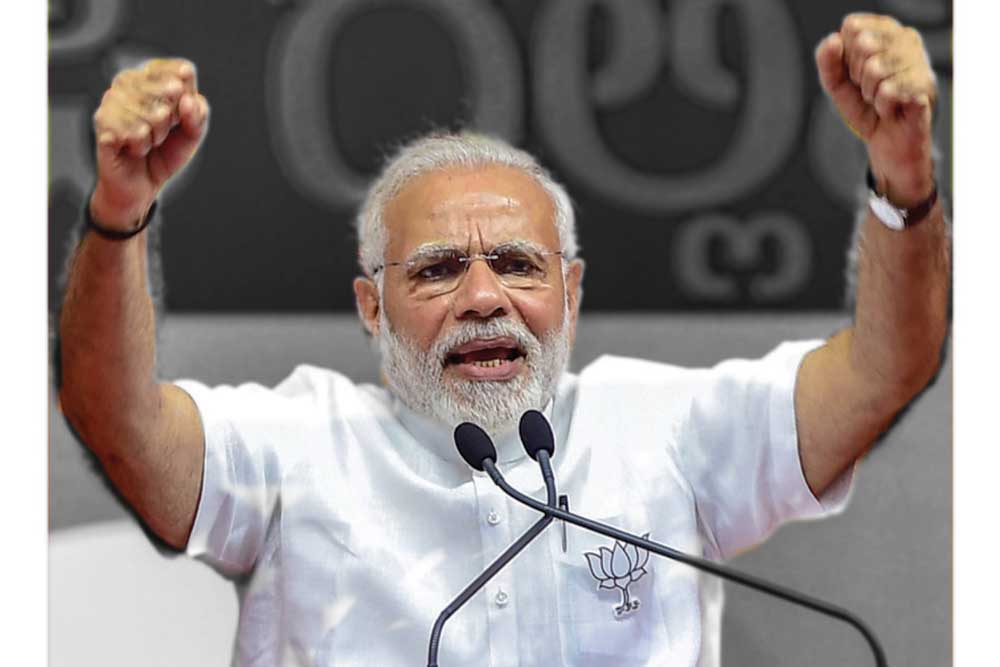 WHEN NARENDRA MODI is on the stump, no election is local. He is the kind of campaigner who makes every campaign a national referendum on the idea of Modi, which still remains an unresolved argument in spite of being the most popular one in the democratic world. The Deccan setting may have its provincial significance, but what matters for the permanent campaigner is the opportunity it offers as a site of renewal and reaffirmation, for what began four years ago needs to be tested and put on trial—and on his terms, his alone. After all, power is a constant conversation, and he is never at a loss of words. Karnataka, too, is all about himself—and his viability beyond the familiar patches of the North.

Four years ago, he came to power on the promise of a Congress-free India. Having spent more than a decade as an alternative model of power and governance, he meant by that promise not just an electoral defeat of the Congress across India. It was an expression of a larger cultural ambition. It was an outsider’s idea of retrieving India from the politics of entrenchment and entitlement, a model that kept the dynastic temptations of a democracy as vast and volatile as India alive. He played out the outsider’s script long before he made his media-friendly splashes elsewhere in the world. The battle was won, but the war would go on, in the mind and on the land. Karnataka is the latest challenge along the way, formidable and thrilling.

It opens a new front. Some Indians still prefer to see the Modi story as a north Indian fable, culturally difficult to translate and sell in the South. This is a comforting thought for those who draw their cultural superiority from a false sense of exceptionalism—and from a reality of isolation. In this portrait of the South as a space where politics is not defined by religious identity, anyone whose calling card is a mix of God and nationalism is a force of division rather than unity. This portrait is a fine example of self-serving con artistry.

Religion has played its political part differently in the South. In Kerala, communalism has been made into a political enterprise on an industrial scale. It is perhaps the only business that continues to pay rich dividends in this so-called progressive state even today. And that is mostly because the growth of communities as political constituencies has to a large extent made caste conflicts less viable. In Tamil Nadu, the early Dravidian rage against Brahminical hegemony was a cultural movement that sought to make religion redundant as the most decisive manifestation of political power. The more you intend to demolish religious hierarchies, the more you accept religion as the essential identity of victims. In Tamil Nadu—and even in Andhra Pradesh—the rational in politics would become overwhelmingly emotional. The saviour-hero in fur cap and dark glasses—or in a mythological costume—was the culmination of this passage from a rational movement to an emotional spectacle.

The emotional adds to the politics of kitsch, and it has staged a comeback in the South. The difference is: the most powerful saviour-hero of the day has given a spiritual touch to emotionalism. And it is something that has not been tested before in Tamil Nadu. God is in the fray, and it is a historical shift in the competitive salvation theologies of Dravidian politics.

Compared with its neighbour, Karnataka is a sobering experience, and politically, it is not that remote from the North. If Karnataka too accepts the inevitability of Modi, it will mean a lot beyond the state. It will redeem emotional politics from its kitschy provincialism, and it will give the rational tradition in southern politics a national content. The new saviour-hero is culturally distant from the ones immortalised on cardboard. This action hero has brought a severe singularity and devotion into politics, which for him will remain a permanent campaign. Set against cardboard knights and clay icons, he looks real, flesh and blood. He doesn’t campaign in regional poetry, and that may ultimately sway the South, which badly needs a dash of political realism.

Karnataka could be the moment—the beginning of a new argument that breaches the last resistance of the Vindhyas.