To be in permanent conversation with India, Modi thinks he doesn’t require the shrinking space of conventional media 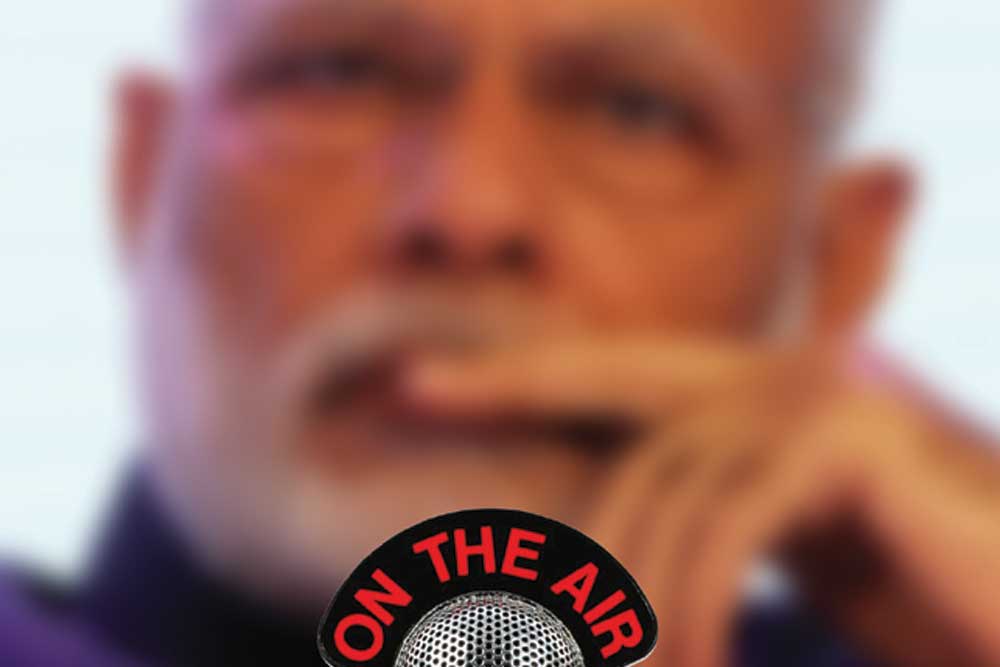 WHAT’S MORE FAKE, the news or the politician? In a world where the commander-in-chief launches his deadliest weapons from his cell phone in the earliest hours of the day, and a new Cold War, simulated from newsrooms and presidential towers, puts Washington and Moscow in a comic-strip standoff, truth is a dispute, power is a delusion, and the media is Me.

In another age, the philosopher politician extolled the virtues of ‘living in truth’. In our age, when the presidency of the United States is pure reality television, it’s war on truth, the theatre shifting from the mainstream newsroom to the unrestricted realm of social media. ‘My use of social media is not presidential,’ Donald Trump had tweeted, ‘it’s modern day presidential.’ Literally, and gloriously for its user, it’s the new Me-dia.

It’s about power declaring freedom from the relativism of other people’s minds and finding its home in the absolutism— and sovereignty—of one’s fingertips. In the drab days of politics as usual, the podium and the sanctimony attached to it shaped the message. The great and the noble of the lot spoke in a language no tweet could have contained: they believed in volume and resonance, and they knew history demanded such a performance.

Then, the media thundered, and proffered down testaments. The Fourth Estate, in every majestic editorial it wrote, sought to keep the conscience of the nation intact, for nation-building was too serious a business to be left to the politician alone. It was not meant to be objective, and it was not meant to be fake either. It was, in many ways, even while pretending to be nobler than politics, as ideological as its adversary. What united them was a loftier sense of shared destiny. In retrospect, it was a time when the people—‘the masses’— needed a pulpit to look upon for wisdom. The gospel according to the editorial pages was a necessary medium for enlightenment.

Disruption first began in politics when the so-called populist stormed the citadel. The grand architecture of politics as usual was shattered, and in its place we saw the shapelessness of people’s power. It was democracy without a structured narrative plan, and the winner was determined to rewrite the terms of engagement. The source of his power was his adversarial relationship with the Establishment, and the mainstream media, in the eyes of the persecuted outsider, was one of its pillars. Add to that mistrust his unwavering faith in his moral system, no matter it was built on self-righteousness, and you get the usurper as the medium and the message.

Trump is its oversized manifestation. He writes his own editorials, and in such manic, hurried brevity that it keeps testing the limits of language as well as presidential decorum. He posts his letter to the editor for millions of his followers. He denies. He rebuts. He rebukes. Petulance is his default position, and it’s the shield of a man who thinks justice continues to be denied to him by media organisations such as the New York Times and the Washington Post. He craves attention, acceptance. Each of those 140 characters is a plea, a teardrop even as it pretends to be an alternative medium. It’s the last wail in a self-destruction drama.

It’s a different story, one of power and omniscience, in the other democracy. Prime Minister Modi, unarguably the most powerful elected leader in the world today after the crash on the Potomac, makes no effort to be media-friendly. Tomorrow, if Modi says ‘my use of social media is not prime ministerial, it’s modern day prime ministerial’, it will be seen as a statement of fact. For Modi, it’s his backstory that explains his mistrust of traditional media. He is where he is in spite of not just his own party but the moral indignation of the mainstream media as well. He was on trial for the longest stretch of time in Indian politics, the loneliest ordeal for a politician. Adversity for him was the perfect setting for a campaign for India, and, as the performance began to make his own party and its managers redundant in his struggle for power, he became the biggest media story. He still is. It was as if he didn’t need them as much as they needed him. It still is.

To be in permanent conversation with India, he thinks he doesn’t require the shrinking space of conventional media. And being a politician aware of his own exceptionalism, he needs to play the prophet and the wise man, the guide and the guru, and he knows that, here too, the script has to be written by himself, as it has always been. A random perusal of his Mann Ki Baat transcripts will show you how Modi plays the communicator perfectly to remain intimate even while keeping himself distant, without letting too much sunshine fall on the mystique. The old revenge of the persecuted has already become the power of being the only one. The media, still measuring its power in terms of access, stands in awe or submission—for better or worse.