Modi Versus Not Being Modi 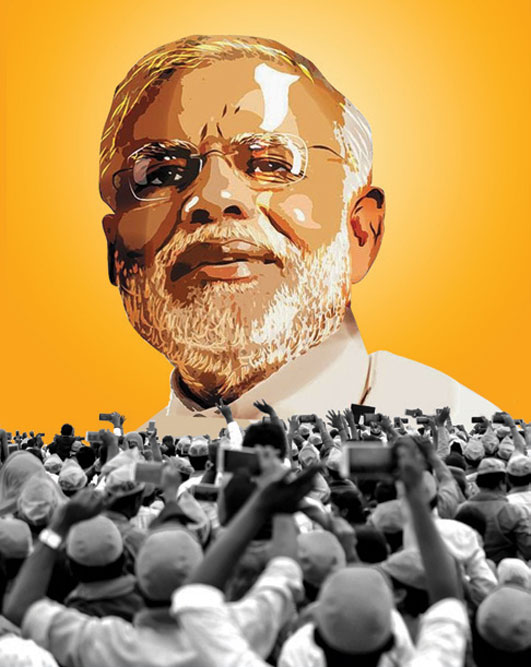 THE MUCH TOUTED diversity—or multipolarity—of the Great Indian Poll Mart is not about choices. Not now, certainly, even as a project like Mahagathbandhan has more phonetic majesty than political cohesion. This election, as it keeps both apocalypse junkies and apostles of Nationalism Shining busy, has only one idea, one argument, one frame-filling figure… and a dissonant chorus of rebuke. It may not be the ideal day for a democracy, which is all about our freedom to take and dump— and to constantly engage with our choice. Increasingly, elections are becoming referendums; they are about the One against Not Being the One. It is not the One against the Other.

It so happens when the One alone has a compelling story to sell, and the best storytellers—manipulators of emotions, magic realists of the future, traders of greatness, peddlers of grievance, rebuilders of the lost nation—win the day. If populism is what ‘liberates’ democracies steeped in entrenchment, entitlement and calcified establishment today, the winners are the best storytellers. They tap into our anxieties. They tell us that it has been worth waiting for. They sing to us that it is fabulous to be alive in the Nation Restored. They dominate the realm, and make the challengers un-originals. There is only one narrator in the corpus of populism.

There are, of course, populists and populists. The most noticeable in the market today are the faux democrats. They make use of the rot they have inherited, and rule as autocrats. They have nothing to lose except that silly old slogan from the past. They may even argue that, echoing the neo-Confucians who remind us of the ‘deconsolidation’ of democracy and the desirability of ‘epistocracy’, controlled freedom alone can preserve the national spirit. The other populist works within the whirl of democracy; he is the strongman who doesn’t control it but makes the best out of it. They create a messaging system in which authenticity of the voice is all that matters. In a polyphonic democracy like India, to be authentic is to be an original.

Narendra Modi may have many things ingrained in his persona to feed all those liberal harrumphers, moral absolutists and nationalist chest thumpers out there, but he is the only one with a story that sounds authentic—whether you like it or despise it. As he clears his throat for the next bestselling soundbite, across the aisle, we don’t have a fresh voice or a counter-voice. Pity, we only have an angry rebuke. We only have non-Modis. This election is between Modi and Not Being Modi. It is India’s most unequal election.

Modi’s theme, well, is Modi. He incorporates the entire universe in his own life story. Biography is what makes destiny and destination the same thing, or so it seems in the narrative skills of Modi. In the new episode, he is the chowkidar. The security guard. The watchman. The vigilante. The Dirty Harry when no one else wants to dirty his hands. The chowkidar evokes multiple truths about an India that still needs his safe hands. It tells a story in which the night is darker and the enemies are nearer. The house is under attack and he is there for you, awake when the rest of India sleeps. In this story, the protagonist is Everyman; he wields the stick to protect the elite. With this story, Modi has made power a shared experience. The storyteller has broken the emotional barrier between the ruler and the ruled. They become one.

To question this story, to doubt its narrator’s integrity, is to ridicule India itself—to be insensitive. And to call this chowkidar a chor is to play up how distrustful you are of the underclass. To call the guy who guards your house a thief is to dishonour the honest and dutiful. And all the while, you haven’t said what you are. Not being a chowkidar doesn’t amount to being someone nobler, meaningful or intimate. We have no idea who this non-chowkidar is. Don’t we need to know as we make up our mind? The chowkidar imagery is an entrapment—and also a morality tale.

India may continue to figure in the so-called Asian Century as a stable civil society and a steady economy, but we are still a poor country—and being a chowkidar is a big deal in this India. Modi as prime minister may not be your average glad-hander but he has humanised power by telling the most convincing story about the powerless. He renounces it even as he fights for it. He wants to be the most powerful so that he can be the most effective chowkidar. This self-portrait thrills the nationalist base (no surprise); it makes him the most authentic Everyman in the fray. This election is a referendum on him; the challengers are only telling us how bad he is, not how good they are. For some, biography is a baggage. For the chowkidar, it is a weapon.