The crisis in the language of politics 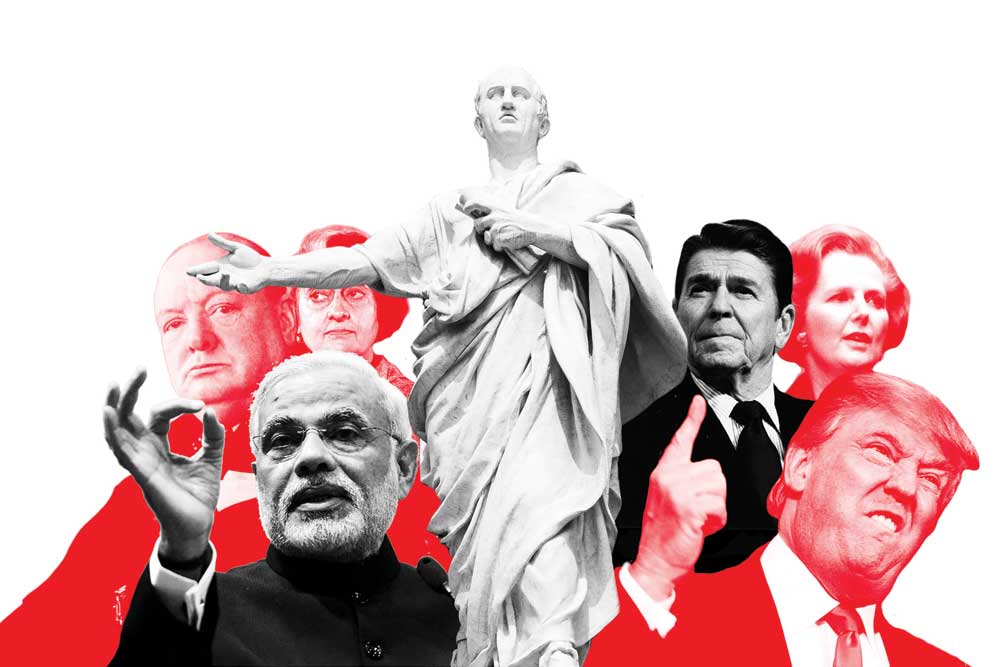 HE STOOD THERE not looking at the camera, sniffing but not smiling for the sake of us, more attack dog than dream builder. She, in red pantsuit, kept her smile—nervous or dismissive?—intact throughout, and delivered her America with the monotonous clarity of an experienced—good or bad?—policy wonk. Diction defined them. His: shorter, sharper, clearer, angry and accusatory. Hers: winding, calmer, and reassuringly status quoist. He raged against political hacks who let America fall, worried about the vanishing factories and jobs, tore apart all those horrible trade pacts, and vowed to make America great again, in spite of the New York Times. She sang inclusiveness and engagement, taxing the rich and reaching out. He called her unfit to be president: no stamina, and no temperament. She said she has both, but a globetrotting peacemaker could be seen fatigued occasionally. Both called each other a liar, attacked each other for being secretive. In their first presidential debate, the biggest media event (both conventional and social) before Election Day, Donald Trump and Hillary Clinton danced on the shifting sands of language, leaving no footprints of authenticity or originality. And there was no mood-shifting ‘there you go again’ sigh—an exasperated but jovial Reagan’s response to an earnest but dull Carter in another debate in another time—either. They were trapped in their own trademark linguistic zones: he in the anti-politician’s resentment; she in the establishment politician’s triangulations.

As Barthes would have said, we are all wounded or seduced by language. It is what gives life a narrative beauty, and it is what makes the past accessible to the living. It is with the sound and structure of language that we measure our emotions, and relate to the other. It is what makes imagination immortal. You are what you say, and are we hearing a lot nowadays that denies our public life a rhetorical refinement? Are we missing the resonance of conviction, and the dignity of a counter- argument? Are we more ‘wounded’ than ‘seduced’ by the Ciceros of the day? Is the language of our politicians adding to the anxieties of our times? After all, it is eloquence powered by morality that makes the politician a winner, certainly in a democracy.

A winner like Narendra Modi, at his best, won’t miss a metaphor to gain easy access to the mind of his audience. He may have displayed remarkable restraint and then resolution worthy of our democracy in the aftermath of the Uri attack, but he has not abandoned poetry: blood and water can’t flow together. Till May 2014, the prosody was masculine and combative; he was the lone outsider pitted against the establishment, and spoke in anger even as he sold hope. Today, it is the politics of anger that provides the alternative to the placid mainstream in the US and Europe; the outsider, the apolitical politician born in resentment and speaking in a language of fear and doom, is on the march. You are unlikely to hear a Theresa May say something like this: “To those waiting with bated breath for that favourite media catchphrase, the U-turn, I have only one thing to say. You turn if you want to. The lady’s not for turning” (Margaret Thatcher). It is unlikely that Trump will be capable of saying what Barry Goldwater said in 1964: “I would remind you that extremism in the defence of liberty is no vice. And let me remind you also that moderation in the pursuit of justice is no virtue.” There is a huge difference between Churchill’s rhetorical flamboyance in the face of historical eruptions and the neo-Churchillian Boris Johnson’s clever neologisms. Vajpayee’s poetic flourish and Modi’s lethal sonority don’t have the same rhetorical effect on the stump. Indira Gandhi was Mother India to the core till her last speech: “I do not care whether I live or die. I have lived a long life and I am proud that I spent the whole of my life in the service of my people. I am only proud of this and of nothing else. I shall continue to serve until my last breath, and when I die I can say that every drop of my blood will invigorate India and strengthen it.” The grandson is still in search of a country that matches his ventriloquism.

How has politics lost its rhetorical elan? That is what Mark Thompson, formerly the director-general of the BBC and currently President and CEO of the New York Times Company, asks in the finest book on political culture I read this year. Enough Said: What’s Gone Wrong with the Language of Politics? (St Martin’s Press, $ 27.99, 342 pages) could be a book-length, anecdotal, rhetorical variation of Orwell’s seminal essay written 70 years ago. In the concluding paragraph of Politics and the English Language, Orwell wrote: ‘Political language—and with variations that is true of all political parties, from Conservatives to Anarchists—is designed to make lies sound truthful and murder respectable, and to give an appearance of solidity to pure wind. One cannot change this all in a moment, but one can at least change one’s own habits, and from time to time one can even, if one jeers loudly enough, send some worn-out and useless phrase— some jackboot, Achilles’ heel, hotbed, melting pot, acid test, veritable inferno or other lump of verbal refuse—into the dustbin where it belongs.’ There is no redemption in politics as long as the language of politicians is an overused weapon of lies and evasions, even if we allow a certain amount of elegant exaggeration. Amplification has been part of rhetoric since Cicero, but, as Orwell, and now Thompson, says, no jargon please. The persuasive power of rhetoric is still achieved by the fine balance between argument (logos), character (ethos) and mood (pathos), but this Aristotelian guidance has no value for a political class empowered by clichés and platitudes. ‘Argument without character is lifeless. The crowd drifts away. Character without argument is dangerous. Who can tell what that spellbinding figure will actually do if those cheers are ever parlayed into real power? Ignore the mood of your audience and it’ll ignore you right back. Make it your lodestone and you risk sailing yourself and them straight into the rocks,’ writes Thompson.

Still, restoration is not out of bounds. It begins with trust, the deficit of which in professional politics has contributed immensely to the rise of the anti-politician—the outsider playing up his native ‘authenticism’. Trust cannot be regained as long as the professional politician under-utilises the virtues of ethos and pathos and overuses amplification. ‘Exaggeration is a drug. It delivers an instant high, but can have deleterious long-term effects… Indeed, exaggeration can become your trademark so completely that the media will always expect it of you and, unless you say something essentially unreasonable, will not report what you say at all.’ Don’t we know? Here, Thompson, one of the finest journalists of his generation before he became America’s most powerful print media executive, does not spare the media either. He is an advocate of mission-driven journalism, as it is being practised at the BBC and NYT, where objectivity and fairness are not yet redundant. A Donald Trump or a Nigel Farage may still ask: Is liberalism a bias or a virtue? Morality in public life is not a bias, certainly.

My favourite line in this book is the least rhetorical: Let’s teach our children rhetoric. Too late to tutor the lost tribe of professional pols about the morality of spoken words, but there is still time to train the next generation in the redemptive powers of language before we lose them to algorithms.