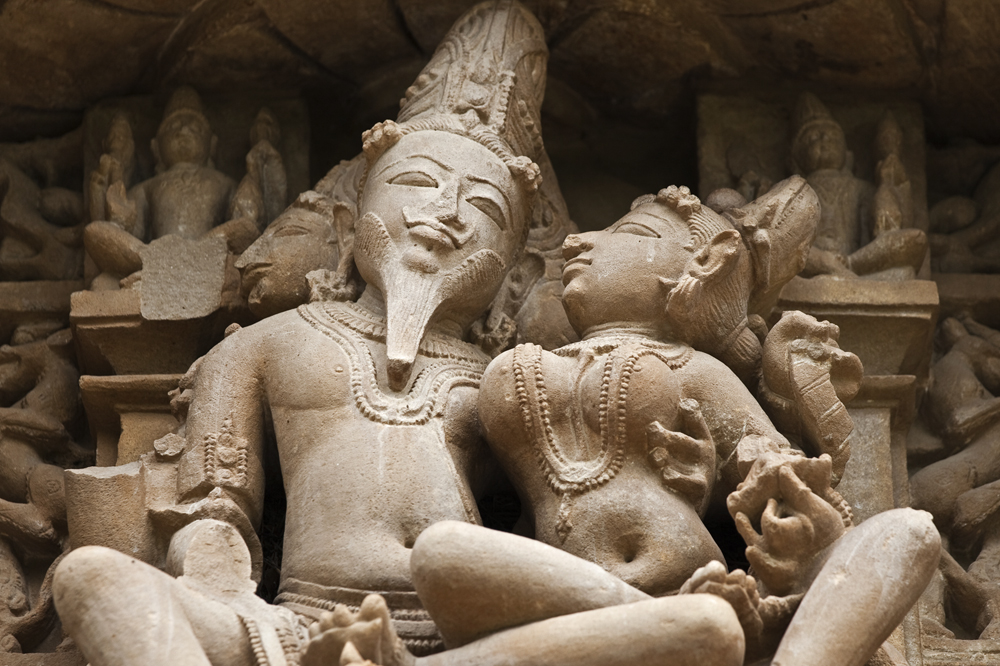 Dharma, Artha, Kama, Moksha is the natural progression of wants in Hinduism. Sage Rishyashringa’s father Vibhandaka, himself a sage, tried to ensure his son’s salvation before he, Vibhandaka, died. He kept his son away from all worldly knowledge in vain.

Adi Shankarachaarya was not entitled to ascend the Sarvajnapeetham (or seat of all Knowledge) till he had physical relations. Vaatsyaayana was a sage who wrote the Kaama Sutra, erroneously considered to be Sanskrit porn from ancient times. Nowhere in Hinduism is the human body considered to a lesser thing than the mind or soul. Dharmaputra the most righteous of the Pandavas refused his seat in heaven if the mangy dog that accompanied him to the end of his journey, was not to be allowed as well in heaven (it later on turned out to the God of Death in disguise).

Many religions consider sex to be solely a means to procreation. Not so in Hinduism. People often parrot that Hinduism is a way of life and not exactly a religion. Physical pleasure is very much a part of life. A glance at the sexual pleasure in the animal kingdom will reassure us about the need for sex. With our technical ‘superiority’ we are too dishonest with ourselves to admit what nature in profusion shows all around us.

Ancient tradition says that every human being has both a male and female side to him/her. That unconsciously, we cross this blurred line many times even daily. We usually do not stay long enough beyond this line to confuse ourselves, as happens also in the case with sanity and insanity. Bi-sexuality is more prevalent than is publicly acknowledged by society.

Ordinarily, a heterosexual human being is attracted to the opposite member. One big factor, apart from sexual preference, is the ability to procreate. Adoption sadly is the only option for a lesbian or gay couple, due to lack of reproductive organs.

Except in the metros, it is very difficult for Indian boys and girls (or people of sexual maturity) to meet. They are strictly chaperoned by adults who do not approve even of any touching. Sexual desire is termed ‘bad’. No “well brought up” adolescent would admit to sexual feelings. This undergoes a miraculous change once they are married.

Segregated, the young people would often find a vent for their desires with cousins, friends and even servants of the same sex. Afraid of being called someone with a dirty mind, the inquisitive adults would let them be. Most of the Indians have their introduction to sex this way. Lack of fear of pregnancy is another big advantage.

The unfortunate ones are pawed in a breast-budding chest or a neat behind by frustrated “uncles” and “aunties” who are more often than not, close friends of their family. Take a look at indoor plants. They move towards ambient sunlight without the slightest guidance. Exploring sexuality is regarded as quite similar to this.

Usually a marriage restricts a person’s sexuality to that with the opposite sex. From instinctive love, they change to a prescribed one. Quite a lot of these “arranged marriages” (where the sexuality is as arranged as the Muhurtham) work out extremely well. Same sex love is relegated to the sepia tones of a wild youth. However, not in every case.

There are practical marriages, which are those of convenience. The gay male, marries a woman, has sex with her enough number of times to impregnate her for the requisite two kids and continues to carry on with his true love affairs. The female is allowed her dalliances with whichever sex she prefers. Strict care is taken to see that the children and society are “insulated” from the truth. There are incredibly warm and supportive ‘foursomes’ like this, where all the partners like each other.

Coming to a Kshethram or temple, this is an area dedicated to the divine. There are exquisite and explicit carvings of animals and human beings engaged in sexual activity. Those distant from the practical divinity of Hinduism may someday seek to “clothe” the ecstatic human beings depicted. Take the case of prominent Hindu deities. Wanting to see the famed Raas-leela of Krishna, Shiva becomes a woman (Gopeshwar Mahadev) to share the bliss so easily available to the women of Vrindavan.

Shiva was curious to see that enchanting form of Vishnu (Mohini) who entices the demon legion away from Amrit or the elixir of immortality. They had even cooperated with their deadly foes, the devas to extract the Amrita Kalasha from the depths of the ocean of milk. Egged on by His Sister Bhagavathi, Vishnu reveals His Mohini form. The sages of Shiva-loka are horrified to see a passion-maddened Shiva chase after a fleeing Mohini. This is sweet revenge for Kama, the God of Love, annihilated in the fire of Shiva’s Third Eye.

One of the most popular gods in South India, Ayyappa is born out of the result of this Shiva-Mohini union. He is often called Harihara, or a combination of both Vishnu and Shiva.

To prove to His devotee that Shakthi, or His female essence is very much part of Him, Shiva assumes the form of Ardha-Nareeshwara (literally he who is half woman). The right side of this deity is unmistakably masculine, while the left side is uncompromisingly feminine. The left side contains the heart, which is seen to be softly yielding to the tough style of this God of Gods, Mahadeva.

Vishnu and Shiva are the most powerful male Gods in Hinduism. They are worshipped unapologetically in their sexual diversity. The tragedy occurs when their acolytes assume greater knowledge than the very Gods. Inner discipline, which was very much part of Hinduism, is slowly, dangerously giving way to control which can only be anathema to this religion distinguished by a delightful freedom of choice.