India must reclaim its universal and ancient narrative 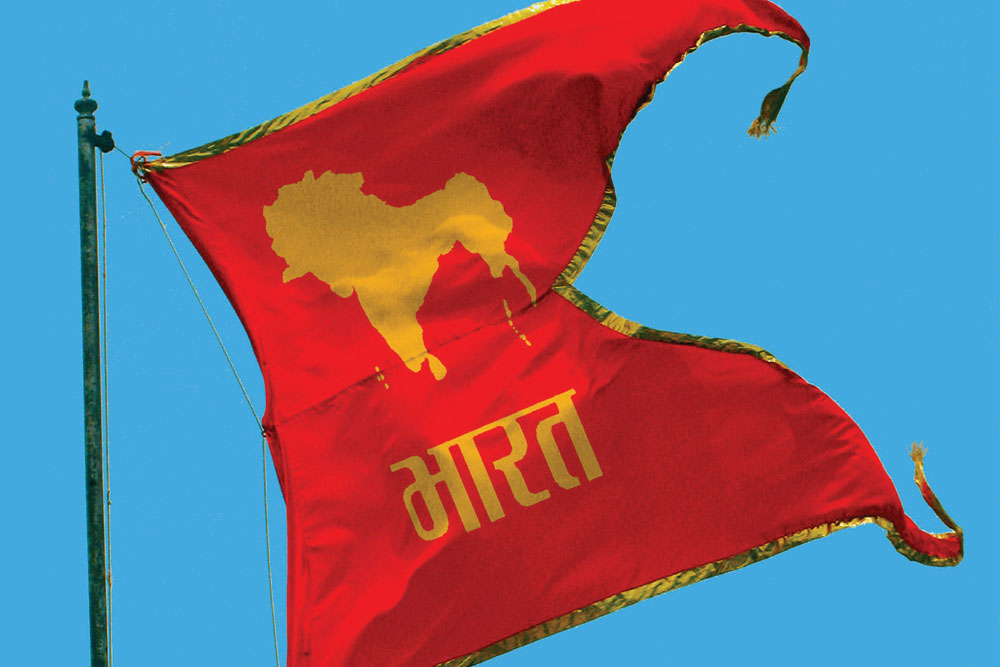 
The National animal of the People’s Republic of China is, aptly, the Giant panda. With its distinctive black and white colouring and misleadingly cuddly appearance, this fits with the nature of modern China. For China, things are simply black (against Chinese Communist Party interests) or white (for CCP interests). The other colours of the palette do not exist in such reasoning. The People’s Republic of China succeeded in getting the wholehearted (if unwary) cooperation of democracies by skillfully and successfully creating and marketing its narrative. Take the latest example, almost immediately after the United States had hurt Chinese hi-tech firms with a ban on US involvement in the chips produced in China.

President Xi Jinping made himself the undisputed leader of China barely a week ago through methods that cannot be considered remotely ‘democratic’, by the oft-declared favoured democratic political system by the US. Almost miraculously in the background of contrary actions and statements, President Xi averred that he looked forward to working with the US. This is despite China’s fraught role in the coronavirus pandemic, its unwarranted attack on Indian territory and an unprecedented increase in its belligerence against Taiwan. This verbal about-turn was only another marvellous, calculated ploy of the Asian giant. It was clear that President Xi was trying to do damage control, which was the need of the hour given the PRC’s dependence on an interconnected global economy.

But what was amazing was US President Joe Biden’s response to Xi’s words. He was soon almost coyly agreeing that China has nothing to fear from the US, when it is precisely the emotion of fear which would be most effective in acting as a check on Xi’s grandiose ambitions, territorial and otherwise. To comment on International Relations is not the intent of this writer. What is highlighted here is the sheer audacity of the Chinese stance. Xi’s words were effective in convincing at least some countries that the PRC panda was cuddly and friendly, overlooking their deadly claws! It is the creation of such complacency about the actions and policies of the PRC under Xi that more often than not, gives undeserved benefits to the system and country that he leads.

In the face of the threat to our country and its ancient values, India must reclaim its ancient and universal narrative. The magnificent ruins peppered all over our country are a mute witness to the progress and sophistication that was there in our ancient societies. Ours is a culture that stresses on what is heard rather than on what is read. The Vedas have been memorised and chanted through millennia. They have been handed over from generation to generation, keeping the pronunciation true to the original version, with scarcely a supporting document to ratify them.

Take a jewel of Indian tradition, which is classical music. The artist sings or plays to the honeyed, rich notes of the tanpura or the more cut and dried ones of the harmonium. Once the basic Shruthi or the pitch is made to match, the next stage in its evolution is a masterful medley of variations, where, as old timers would state, melody is the reigning empress.

In music and dance and other traditionally ‘temple art forms’ (they were practised most within the premises of temples), we can see the proud inheritance of millennia of art, carefully preserved and nourished, with each performer adding his or her own experience to enrich the original ones.

The importance of ‘Guru Parampara’ or continuity, became as crucial as the continuity of genes through unbroken bloodlines. The education given from masters was revered. Fortunate was that Guru who was able to share all his or her knowledge in one lifetime, with either a single student or better still, a group of students.

The spiritual importance of Mount Kailas, apart from the obvious one of being the domicile of Shiva and Parvathi, is that this mountain is considered to be the repository of all knowledge retained by Gurus in their lifetimes. The word ‘Kailasam’ is sometimes interpreted as that which is within the hand or ‘Kai’, indicating that the greatest duty of a true guru is to switch on the light within each student. A true guru makes his or her students visibly grow in knowledge and evolve as human beings, not simply make them slaves to rote learning or memorisation.

No person, however intimate, can by proxy live for another person. The mother physically carries the child in her womb for months. Yet, at the prescribed time she has to let the child out, for the sake of both the infant and the progenitor’s health. Similarly the father, being the one who spreads his seed, does so and withdraws. The Ancients knew and taught that these are all implacable laws of Nature. Our Ancients were in sync with the natural world around them. They learned the secrets of the Universe by looking around them with great respect for discovery, and attentiveness. As a direct and proportional result of this, the cosmos revealed its secrets one by one.

Above all, the Ancients were open to the idea of continuously learning, which they saw as an obvious precondition for teaching.

This unique aspect of our forefathers is clearly stated in the way Shri Krishna concludes the Bhagavath Gita to his rapt cousin Arjuna. Unlike the previous incarnations of Shri Maha Vishnu, Shri Krishna was fully  aware of his own divinity. Yet he tells Arjuna to think upon all that Krishna expounded and then come to his own conclusion and act accordingly. It was this limitless freedom to choose and respect for that choice, which sustained the greatness of this land.

The riches of our ancient traditions are embodied in a former royal, Vishwamithra, who was blessed with the vision of the Gayathri Manthra, which has been taught from generation to generation for thousands upon thousands of years. It is this Mahaa Manthram, which is a must for the Yajnopaveetham (holy thread ceremony) of Brahmins, some of whom consider themselves to be a grade above the Kshathriyas. It is wonderful that the non-Brahmin Vishwamithra is the one to whom the Gayathri Manthra was revealed. Or another such sage from the past, Vaatsyaayana, who wrote his marvellous treatise, the Kamasuthra, erroneously thought by those unaware of its depths of meaning to be pornographic in content. Ved Vyaasa, Pathanjali etc show that the sages were as varied as the subjects they spoke on. Knowledge was not restricted to any particular segment of the fabric of ancient society; it was disseminated all over, and consequently so was respect and equality.

Kaama (desire), Krodha (anger), Moha (attachment), Lobha (greed), Mada (being opinionated – strangely ‘Mada’ or opinion also meant religion!), Maatsarya (competition) are the pitfalls on the spiritual path. The Ancients were clear that one has to work on destroying Maatsarya first. The true competition can only be yesterday’s version of oneself. The passing of 24 hours had to bring about betterment, even the slightest at the very least. There is a crisp German saying, “Ubung macht Meister”, which means that it is constant practice which makes one an expert. That phrase could have come directly from the Ancients of our land.

Starting from Maalsarya, a student works in conquering rather than controlling the self. Control smacks of an external force suppressing natural instincts. This cannot be depended upon to be entirely stable. It is Kama which is the fundamental and strongest aspect of a human being. On the surface it merely means ‘desires’. It can be something as mundane and innately human as a desire for wealth, sex, fame etc. But the word ‘Kam’ is made of ‘Ka’, Saraswathi and ‘Ma’, Lakshmi. A knowledge system which includes them is, of course, complete.

Shiva is normally not worshipped by himself, unless he is in his Nataraja form. While Shiva was doing Tapasya, he burnt up Kama, the Lord of Love (in this context), with the fire of his third eye on his forehead, as he opened his eyes after meditation. The Shivalinga has Shakthi as the base. A Dakshinaamoorthy imparts Education, which is the form Shakthi takes on then.

Our land has immense historical resources (more oral than written ones, though the latter are impressive too). Sadly, our knowledge of the teachings of the Ancients is withering away slowly because of one crucial reason. This is because there are only very few qualified teachers and few interested students. Is this because as a people we no longer trust our own narrative? We almost reflexively seek the stamp of approval from, more often than not, the West. Yoga is the most obvious example of this. Until the West swore on the benefits of yoga and meditation, we were indifferent towards them. Such arts were considered to be only things mentioned in mythology and therefore not to be taken seriously. They were regarded as being practised only by some old fogies or ‘religious’ types!

Sanatana Dharma stresses on the application of collected knowledge for the betterment of life in this Universe, not merely scattered human societies. The colour of human skin varies drastically. So do the customs and beliefs of peoples. How many people who rant against the wearing of the hijab pause to think of the veil worn by chaste wives who are forbidden to show their bare heads in front of the men in their husband’s family, and sometimes to their own father and male siblings   post puberty?

For centuries this marvellous land has gradually given away our its native wisdom and narratives to outside seekers. This has resulted only in quelling our diversity and denying ourselves the excellence arising from plurality. Worldwide, people of different faiths insist that it is only their religion that is superior to others and therefore the best. It is high time Sanatana Dharma got out of the rat race of religions and claimed through its troves of knowledge the pure spirituality which is its domain.