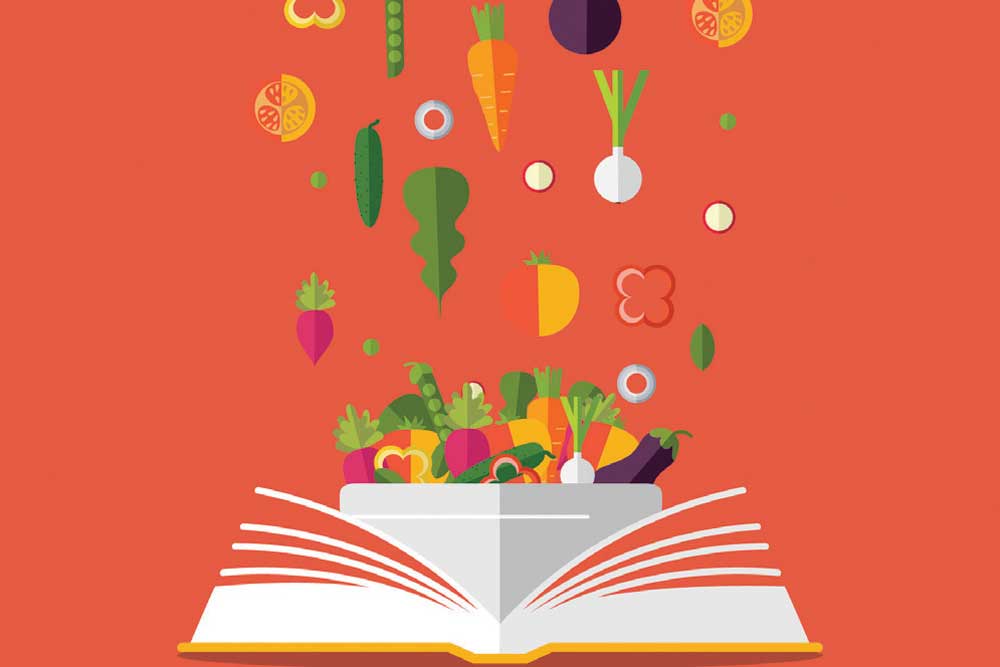 EVELYN WAUGH said that his favourite bedtime reading was Elizabeth David’s cookbook. Mine used to be Emily Post’s Etiquette. Who would not want to read her instructions on how ‘party sandwiches’ are made (by buttering the end of a loaf of not too fresh bread, spreading the filling, and then cutting off the prepared slice as thin as possible, not thicker than an eighth of an inch). Or on how to eat corn-on-the-cob—one must avoid making ferocious and snatching bites.

When I was a graduate student in New York, five of us would get together on weekends to cook. We would first decide on the cuisine—that would occur over a glass of white wine, and we would browse through the photographs and recipes in the Time-Life cookbooks on my bookshelf, devoted to invoking the spirit of Latin America France, Russia, Spain, Italy, Armenia, Turkey, and so on. After settling on a Mole Poblano de Guajolote from Mexico, two would set off to the supermarket to buy the special ingredients—turkey, chillies and chocolate. The rest of us, fortified by more wine or gin and tonic, would begin the sous-chef jobs of chopping the onions and tomatoes, blanching the almonds, powdering the sesame seeds, cloves, cinnamon, and so on. By the end of the evening, we had savoured the complex sauce made with chillies and chocolate twice—once in our imagination, and the second time, in reality.

While reading cookbooks, we often think that they offer a fascinating glimpse into the food habits—what constitutes delicious fare—of a class or a region in a particular era. Anthropologist Jeremy MacClancy, however, cautions us not to take cookbooks as indicative of what locals ate in the time and area it was written. ‘Books, even cookbooks, are written for a diversity of reasons and it is often more profitable to enquire why they have been written than analyse their contents in an uncritical manner. Also, cookbooks are literary products and have to be seen as such… All cookbooks have fictional dimensions. The question is: of what kind and to what degree? Some, for instance, act as deeply idealized folkloric records; the authors of these salvage ethnographies are concerned to ‘save’ seemingly traditional recipes before they are lost.’

Recent cookbooks published in India definitely fall in this category—they highlight recipes from their grandmothers and mothers, or haute cuisine from another era such as The Konkani Saraswat Cookbook by Asha S Philar, Kashmiri Cuisine Through the Ages by Sarla Razdan, and My Bombay Kitchen by Niloufer Ichaporia King. Preeta Mathur in The Courtly Cuisine: Kayastha Kitchens Through India explains how, by virtue of being administrators and ministers under Mughal rule, this community’s cuisine came to be influenced by the meat-loving emperors. Uttar Pradesh’s Kayasthas like red chillies stuffed with fennel and amchoor, and pickled in mustard oil, writes Anoothi Vishal in Mrs LC’s Table: Stories About Kayasth Food and Culture. LC is the author’s grandmother. These books are also, in MacClancy’s words, expressions of cultural nostalgia. The script here seems to be: ‘This is the world we have already lost, but which we can try to re-create through cooking.’

Another type of cookbook is the personal memoir that also highlights the domestic history of the author. Rukmini Srinivas’s Tiffin combines the multi-geographic and cultural tastes of her childhood (a Tamilian Brahmin who grew up in Pune and Madras) and her subsequent life with her husband, the famous sociologist MN Srinivas. “I find my own biography, just from living as long as I have and through the era of British colonialism, the freedom movement, India in the 40s, 50s and 60s and the fact that I have travelled extensively with my husband gives me a unique perspective on how Indian women perceive their worlds,” she said in an interview. In Berkeley, RK Narayan was a daily visitor to their home. We learn that Narayan, who had gone out with a young American scholar to a pizzeria, mistook pepperoni for tomatoes and only after tasting it realised his mistake. He later asked Rukmini to give him rice with yoghurt as ‘cleansing food’.

Cookbooks also appeal to the aspirations of readers, feeding their fantasies about the identities they wish to achieve rather than lending substance to identities they already possess

While a memoir-style cookbook is more reminiscent of the late 20th century, those written in the colonial era tend to be more prescriptive, as revealed in the titles of the books— C Lang’ sThe English Bride in India: Being Hints on Indian Housekeeping (1909); A Friend in Need English-Hindustani Cookery Book, compiled by the Ladies Committee FINS Women’s Workshop (1939); Dainty Dishes for Indian Tables by anonymous (1879); Agatha Florence James’ chapter ‘Indian Household Management’ in The Lady at Home and Abroad (1898), and so on.

The purpose of those tomes was two-fold: apart from providing specific instructions on how to run a household, prepare food and entertain guests, these manuals also outlined the values and how the imperial class ought to represent itself to the natives. As more middle-class Englishwomen travelled to India after the 1857 uprising, the prescriptive nature of these manuals became more strident.

There is a debate between scholars who claim that the British consumed a diet different from local people in order to separate themselves as rulers (EM Collingham, Nupur Chaudhuri, Uma Narayan and Susan Zlotnick) and those who say that there was no clear-cut divide between the rulers and the ruled in relation to food and that a close relationship existed between the British colonisers and their subjects (see Leong-Salobir).

The recipes in these cookbooks make it clear that ‘being hybrid’ was the primary characteristic of the food that colonisers ate. Take the recipe for Bombay toast in Mrs John Gilpin’s Memsahib’s Guide to Cookery in India. It uses minced anchovy or redfish while another breakfast dish is ‘curry balls’, consisting of rice cooked with curry powder, sugar and salt, chopped apple and onion, then rolled into balls with minced meat, parsley and egg and fried or baked. Colonial food incorporated the dishes most familiar to the British, but also embraced indigenous ingredients and cooking techniques of Britain’s colonies.

A similar process of hybridisation was occurring in the culinary world of middle and upper-class Indians in the 19th and 20th centuries. Magazines such as Bengal’s Pak-Pranali listed recipes and prescribed cooking habits for an ideal modern housewife—she was supposed to be skilled in traditional and modern ways of cooking.

Another type of cookbook is the one that explains India to a foreign audience. Santha Ram Rau wrote The Cooking of India for Time-Life Books in 1970. These books discussed the culinary tradition of a country within the geographical, cultural and historical milieu. She struggled to find a common theme of Indian food and then concluded that ‘there is no major body of dishes and techniques of cooking that one can combine to call a “national cuisine”’. In the words of one scholar, Rau’s work ended up being part autobiography, part travelogue, part social and cultural history, and part political platform.

Some, like Mrs Balbir Singh’s cookbook, are timeless. Bhavani Singh cooked for my husband’s family for over 40 years. His dals, shammi kebabs, and kofta curry were legendary. After he passed away, having retired about ten years prior to that, I thought that we would never be able to taste those kebabs and koftas again. Well, it turns out that Bhavani Singh followed the directions given in Mrs Balbir Singh’s cookbook. I promptly handed the recipe to the cook. Yesterday, for lunch, he made the meat kofta curry. Delicious. The kofta was fragrant and light, while the sauce was perfectly balanced.

The structure of a cookbook also offers us interesting insights into the way a country or a region consumes food. Are the recipes arranged according to courses (as the French ones are), or is the classification system different? The Ni’matnama manuscript of the Sultans of Mandu, the earliest Indo-Persian cookbook still available, arranges recipes in no particular order. Sweet and savoury are mixed. It shows a strong western and central Indian influence: khichri, bhaat, khandawi, bhuji (fried vegetables), rabari, khaj , etcetera. There are also recipes drawn from the Persian lineage—pilaf, sikh, yakni, shorba, kufta, kebab, sambusas (like a samosa), and a large variety of meats such as mountain sheep, beef, rabbit, quail, pigeon, and so on. The recipes are neither detailed nor precise; quantities are not mentioned.

This mish-mash of an arrangement is followed by the cookbook writers of the 1950s and 60s such as Mrs Balbir Singh and Meenakshi Ammal. But the modern Indian cookbooks (Tarla Dalal, Madhur Jaffrey, Monish Gujral, Sanjeev Kapoor) display a soup, salad, vegetables, meats, fish, rice, and dessert classification—reflecting perhaps the way we now consume our food.

If Jeremy MacClancy is right that cookbooks may also appeal to the aspirations of their readers, feeding their fantasies about the identities they wish to achieve rather than lending substance to those they already possess, then each of us has to examine our personal favourites to discover what underpins our aspirations.