Will we ever see beauty in defeat? 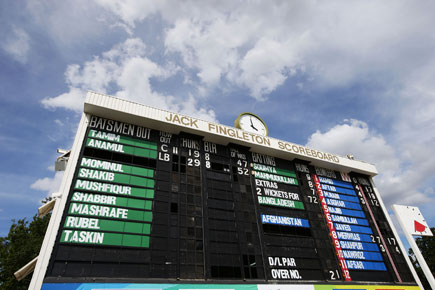 If the World Cup is to have some value, you’d reckon it must include recommending itself as a platform for all kinds of comparisons. And if in the opening weeks of this edition, those include stacking up innings totals against tournaments past, you might hail a consistent increase. If so, you’ve not been paying attention.

Ever since Sunil Gavaskar carried his bat for a personal contribution of 36 in a team total of 132/3 in India’s first match at Lord’s in the inaugural Cup of 1975, and this at a time when ODIs were 60-overs-each affairs, you’d think evolution in cricket’s abbreviated formats at least meant the ability to score faster. If so, you’d only be partially correct. Because as a data check in The Cricketer magazine’s January issue shows, strike rates in ODIs have been going up progressively in tandem with changes in fielding rules to assist faster scoringand bigger hits. It culminated in Rohit Sharma’s 264 at Calcutta versus Sri Lanka in November, in an India total of 404 (and now, of course, over 50, not 60, overs).

Changes first began in 1992, and the latest round of high-score-assisting fielding restrictions were put in place in 2012. And frankly, to most spectators, they work as a matter of faith—you believe that the match officials are keeping a stern eye on how many fielders are outside the 30-metre circle at any given point of time, the number permitted changing not just with overs bowled but also with Powerplays.

Yet, even as fielding restrictions have encouraged higher innings totals, they do not always yield the close finishes of administrators’ dreams. Take India’s opening matches against Pakistan and South Africa. Chasing India’s 307, SA collapsed at 177 all out, their heaviest defeat batting second at a World Cup. Against India’s 300, Pakistan managed 224, the 76-run defeat their heaviest to India at a World Cup batting second.

Indeed, even when the team batting first is bundled out for a meagre total, the defeat can still be spectacularly crushing. Ask England. All out for 123 against New Zealand, their net run rate took a yet more cruel blow when the Kiwis chased the total down in 12.2 overs, making it the second fastest 100-plus run chase in ODI history. (All World Cup stats courtesy Cricinfo.)

So, along with faster scoring, there’s been a tendency to comprehensive defeat or victory. Talking at a book function in Delhi recently, Australian cricket writer Gideon Haigh noted that teams are becoming more brittle, in that on the day it does not all come together for them, they lose the capacity to put up a fight. It could be so because teams, harried for time in an ever more crowded calendar, are given very few practice matches to acclimatise—in his book Saving the Test, Mike Jakeman made the case most persuasively for the five-day game, but you can see why it holds across formats. It could also be because in that same crowded calendar, one match/series/competition quickly giving way to the next, individual games are no longer charged with a particular context, which has traditionally given cricket a narrative and importance above the mere scoreline. Rahul Dravid explained the problem eloquently at the Bradman Oration in December 2011, and sought to find a solution by separating each of the three formats (Tests, ODIs, T20s) in an appropriate competitive framework. To no avail.

Be that as it may, this spectacle of crushing defeat, of the team you are rooting for or against, brings its own challenges. On ordinary tours, these things pass without much drama—but in tournaments like the World Cup or bilateral tours of intense rivalry (India-Pakistan, England-Australia Ashes, etc), the widening margins of victory should call for more nuanced appreciation.

Cricket is a spectator sport more than most—it is fraught with the emotions and interpretation of those who watch and analyse it. Those of us who love and watch cricket need to factor in changes in how scorelines are becoming lopsided in how we hail and recall matches. Largeheartedness and a sense of humour help, of course.

In Here and Now, a compilation of letters exchanged with Paul Auster, many about the experience and joy of watching sport, JM Coetzee expresses unease about competition in which the result is all that matters. ‘At the back of my mind,’ he writes, ‘is some ideal—and perhaps concocted— vision of Japan in which one refrains from inflicting defeat on an opponent because there is something shameful in defeat and therefore shameful in imposing defeat.’

That may be too much of an ideal to approximate in the real world. But maybe Coetzee has given us a clue anyway— maybe we could stop seeing defeat as being shameful.

(Mini Kapoor is a Delhi-based writer)