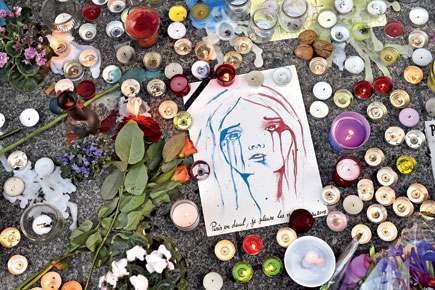 This war has always been against the life others live. It has never been, as we tend to call it, adding respectability to barbarism, a clash between civilisations. It is a rage against civilisation. Paris, as a city and a statement, is everything that this war is not. This war is waged by men who kill for a better life after their own death. Paris is here and now, where the pleasures of an evening are sought in a football match, in a rock concert, in a café, and at any number of other places that beckon the flâneur, the dreamer, the traveller… Paris lives the moment, unlike those who knock at the doors of heaven with guns and swords. The killers, flashing their Kalashnikov and invoking their god, storm the football match, crash into the rock concert, fire at the café because this life is a struggle, a blood sport, and the afterlife is pure bliss—Paris opens the door to paradise, where virgins are waiting. When the foot soldiers of this war pull the trigger, they are powered by the fantasy of tomorrow and the wretchedness of today, and Paris, one of the most beautiful places on earth, happens to be an ideal site to display their hatred towards the joys of life.

They have been here before, in the beginning of this year, when, provoked by laughter, they burst into the editorial meeting of the satirical magazine Charlie Hebdo—and killed its cartoonists and writers. Laughter shattered the imagined idyll of the Caliphate, mocked the god, and insulted the Book. Long before he was shot, the magazine’s editor, a blasphemer marked, had said, “I would rather die standing than live on my knees.” He was, in retrospect, talking on behalf of all Parisians, and people everywhere who refused to change their lives and attitudes to suit the cartoon-scarred god. They went to the café, listened to music, watched football matches and did a million other things that were not written in the Book, even as hundreds of Parisian youth from the ghettos—what the French call quartiers—travelled to Syria to join the ISIS, whose extraterritorial horror is the world’s biggest challenge after Nazism, which, too, was built on an idea that annihilates the Other.

As Paris rises from the wreckage of Friday the 13th, a few truths persist, and we have been tentative in facing up to them.

1. France is Europe’s demographic tinderbox where Muslims and Jews form formidable, incompatible minorities, and where the quartiers continue to resist integration, and breed radicalism, and where the Republican ideal of laïcité— the complete neutrality of the state in religious affairs of the citizen—is being demolished in schools, once places of sacred secularism, now battlefields of the state versus religious exceptionalism. “The current mantra,” wrote Mark Lilla in a brilliant article France on Fire in The New York Review of Books a few months ago, “which President Hollande felt obliged to repeat, is that Islamic terrorism has ‘nothing to do with Islam’ and that the most important thing is not to ‘make an amalgam’ of all Muslims. But this attitude only reinforces an institutional and intellectual omerta that makes it difficult even to discuss what is really going on in the schools.” The voluntary outsider in the republic is a child of a wrong education.

2. Let there be no doubt: the terror that changed the balance of power in the 21st century has an adjective—and it is ‘Islamic’. It is the faith, dressed and masked in black, that wields the knife, hovering over the victim, a Western journalist or aid worker in orange robes, the colour a reminder of the prisoner of Guantánamo, on his knees, and draws blood in videotaped jihad. It is the religion that converts, conquers and kills, and only a few courageous commentators and self- proclaimed heretics such as Ayaan Hirsi Ali would say that the slash-and-bomb theology of Islam owes it to the Book, not to the man-made sociology of the ghettos. So the change, the rejoinder, the reformation, must come from within. The war cry of the lone wolf or the wolf pack needs to be replaced by the voices of sanity from Islam itself, as the beginning of a counter-caliphate of reason and reform to the Islamic State.

3. The project of ISIS has not only spawned a new era of fear. It has created a huge humanitarian crisis of displacement as well—the boy washed up on a Turkish shore will not vanish from our conscience. The new exodus may be a convenient cover for god’s mercenaries, but such possibilities do not minimise the reality of the homeless and the dispossessed— the human wastage of jihad. The world should be generous in accommodating them. And the world should be united in its war on the evil. It makes no sense to wait for a city under attack—another Paris—to reinforce our resolution, our commitment to the values and morals of our everyday life, and our rejection of vengeful gods and their merciless Books. The war against ISIS is the war of every nation that has a stake in the civilised world—the tricolore unites us all today.

False gods die, but only after feeding our fears, killing our joys, and making the world cheerless. That is what history tells us. In the end, the flâneur by the Seine will outlive the Islamic assassin lurking outside a café, or a theatre, or a football stadium, or anywhere nearer to you and me.