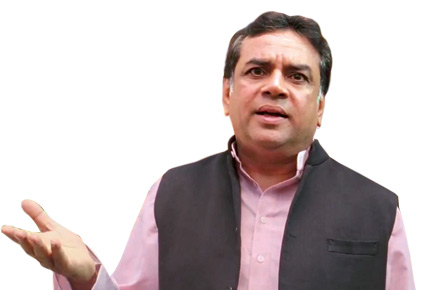 In an interview to Suparna Sharma of The Asian Age recently, Gujarati actor Paresh Rawal said what India really needs is a dictator. He prefixed the dreaded D-word with ‘benevolent’—I suppose, to mean a ‘great dictator’ rather than a bad one. He also referred fondly to the Emergency as a time when things “worked”: trains and buses ran on time, nobody sat on files. These are Rawal’s personal opinions. Except that he is running for the Lok Sabha from Ahmedabad East, having replaced a seven-time BJP MP who holds the seat. Rawal is also, I’m told, most likely to win.

In 1993, Rawal played Sardar Patel in Ketan Mehta’s biopic. Patel (may his soul rest in peace) was a Congressman and Nehru’s deputy in India’s first cabinet; he is now a mascot for the BJP. Rawal has also impersonated Lalu Prasad Yadav in a film called Dand Nayak (1993). What are his other political credentials? Plenty, if you ask me. He belongs to mainstream Bollywood and has done exceedingly well. This tells me he has tremendous political experience.

Like democratic politics, Bollywood has no barriers to entry. Family names often matter. The trade naturally gravitates towards important mentors and camps, making loyalty an important precondition for rising up the ladder— other than luck, looks, talent and other attributes, of course.

A culture of patronage would be just as strong in bureaucracies and corporate firms. But you still have to go through a common filtering process to land an entry-level executive’s job, before you can suck your way up to lead a small team as a manager. The Indian electorate doesn’t value educational qualifications for candidates who are meant to lead the country. If anything, in public, politicians pretend to be less intelligent than they are. This is true of a lot of people in Bollywood too. It is intellectually reassuring for the masses.

It is unclear exactly what a politician does for a living while out of public office. ‘Netaji’ is how idle men in khadi uniforms are introduced to everyone in small towns and villages. ‘Struggler’ is Bollywood’s equivalent. Being perennially an aspirant is a full- time job, just as legitimate success is achieved only through voting by the public—in elections every five years or at ticket windows every Friday.

The outcome of an election or a film’s release also reflects the spirit of the times; 1950s commercial successes like Awaara, Do Bigha Zameen and Mother India could simultaneously compete at Cannes or the Oscars. Three of the four biggest hits of this election year thus far are Ragini MMS 2, Main Tera Hero and Jai Ho. You can track a similar decline in the standard of India’s elected representatives, although if you compared the quality of both movies and politicians today with those in the 80s and 90s, you might agree that there has been a vast improvement. This could be because of a growing middle-class and a new generation of urban voters that casts votes rather than votes caste, and prefers variety over formula in films.

Practically all political parties field entertainers in elections. They always have. Only the number of such candidates has grown. Rawal’s chief advantage over a rookie politician is that he is a popular actor. He’s used to facing huge crowds. All politicians cannot possibly think exactly the same way about every word written in their party’s manifesto, yet they stick to a written script—actors do the same.

Politics can be terribly divisive, though. Appeasing specific constituents, based on caste or religion, through fear or favour, guarantees a certain percentage of voters. In a first- past-the-post system, all you need to win is one vote more than your closest rival anyway. This generates typical political formulae: M (Muslim) + Y (Yadav) + Other OBC (Other Backward Class), etcetera.

Formula films are unifying that way. They aim to maximise ticket-sales, preferring to alienate no one, creating products out of trends and adhering to the status quo. This is one of the reasons mainstream Bollywood films have always remained either politically agnostic or totally unaware, as have those involved in making them. This is revealed in Rawal’s odd understanding of democracy itself.