Those Who Do Not Want to Bury Modi 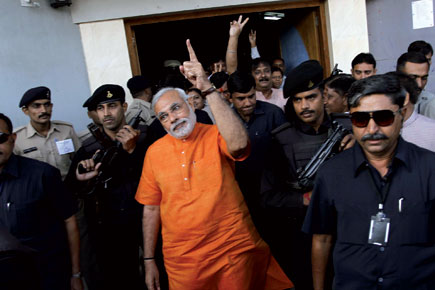 
Those who like Narendra Modi, or perhaps more accurately, no longer consider him a danger, are suddenly growing in number. Some are only a more sophisticated version of the internet loonies who pass for right-wing supporters, but they at least have the virtue of consistency. Some are industrialists, who claim to speak dispassionately, but they at least know what it is to attract Modi’s ire in a state that has been home to big business long before he was in politics. But there are others, who are now telling me—by ‘me’ I mean someone who embraces the descriptions ‘worried about Modi’, ‘anti-Modi crusader’ and ‘Modi’s enemy’—that I am ‘blindfolded’, I am choosing ‘fury over fact’, and that by attacking Modi, I am ‘disguising’ my ‘larger complicity’.

Let me cite some instances, because only through these is the cant on offer obvious. It is a cant that clubs together all those who oppose Modi and smears each with the views and associations of a few.

‘Those worried about him first need to set their own house in order.’

And then goes on to write: ‘You can look at the convictions of Modi’s cabinet colleagues and point to those as proxy proof of his culpability. You can also look at them and wonder why so many Congress cabinet ministers still have not been made to answer for 1984. The point is not to use 1984 to politically exonerate Modi. The point is that it is hard to attack evil when we so widely condone it in other contexts. Third, the social and political isolation of Muslims is a large, complex phenomenon, in part a product of the tyranny of the compulsory identities the Congress has produced. It is also exacerbated by the fact that friends of minorities like the Samajwadi Party are running no more than protection rackets for them, depending on a permanent tutelage. Unfortunately, attacking Modi has become a way of disguising our larger complicities. It is more about assuaging our guilty conscience than setting things right. No wonder the attacks lose their sheen.’

Mehta’s odd use of pronouns is obvious even on a cursory reading, and it says something about the sleight of hand used to make the argument. Let me begin with his sentence, ‘You can also look at them and wonder why so many Congress cabinet ministers still have not been made to answer for 1984.’ I have indeed wondered, and have written that I believe Rajiv Gandhi’s complicity in the 1984 violence against Sikhs is similar to Narendra Modi’s in 2002, I have written that I think Kamal Nath’s presence in this Union Cabinet, given his role at the head of a mob that burnt two Sikhs to death in 1984, is a disgrace. Have you, Mr Mehta?
So perhaps when you say that ‘it is hard to attack evil when we so widely condone it in other contexts’, the ‘we’ is misplaced. I have not condoned it, you have, and now you want to shift that burden onto my shoulders, which is how you could reach the absurd conclusion that ‘unfortunately, attacking Modi has become a way of disguising our larger complicities’. Not ‘ours’ Mr Mehta, but yours.

In the same newspaper, its editor Shekhar Gupta writes:

‘By choosing fury over fact, delusion over reason, passion over politics, Modi’s enemies — beginning with the Congress — make Gujarat politics a one-horse race.’
Writes Shekhar Gupta: ‘What gives Narendra Modi such invincibility? Shall we call it a self-defeating conspiracy of the faithful? The entire community of Modi haters and baiters, political rivals and ideological questioners has driven itself into a hole, creating its own delusions and believing them.’

He goes on to explain: ‘How can we, as modern, liberal Indians, accept the brazenness with which a politician with as dodgy a record as Amit Shah is fielded in this election? But should our journalists confine themselves to still covering the riots of 2002? Do we take note of the intervening decade of governance and politics, or not? This is not an argument about moving on. Far from it. This is an argument about professional diligence in journalism, as well as academia and, indeed, politics. Modi’s detractors, including most of us in the media, have allowed our judgement to be led by our views on what we see as the “core” issue with Modi. The Congress has lazily taken the cue. The Congress has not tried to put together a five, even a ten-year plan to defeat him. That’s why I called it a conspiracy of the faithful.’

In 2010, a piece in the same newspaper had asked, ‘In fact, it is precisely in that realm, of education and health and social services, that Modi’s rhetoric must be tested. How effectively has he drawn the state’s religious minorities into Gujarat’s growth and success? Does his fabled governance genius translate into a better life for those his politics rejects?’ Now this paper’s editor wants me to forget the answer to this very question.

It seems to me that to be true to my calling as a journalist, I must consider who gained and who lost out in Modi’s version of governance and politics. Travelling through Gujarat, the answer is obvious, as it is obvious in Modi’s own constituency, particularly, where he has selectively chosen not to engage with Muslim voters over the past decade.

But beyond subjective observations, there is ample statistical data to back up this claim.

To quote from a recent article that appeared in The Indian Express, ‘At the 2007 NDC meeting to discuss the Eleventh Plan, Modi had openly hit out
at the prime minister’s 15-point programme for minorities, demanding that it be dropped “in the interest of maintaining the social fabric of the nation”. He subsequently never implemented the Centre’s scholarship scheme for minorities.’

That Indian Express article also states, ‘The final version of the Twelfth Plan document has named Gujarat among four states with the maximum number of Muslims below [the] poverty line…’

Which is why, when Madhu Purnima Kishwar argues in Outlook (‘The Kettle Hits Back’ , issue dated 25–31 December 2012) that ‘anti-Modi protestors run their rabid campaigns blindfolded’, she cherry-picks data to make her point. For example, she writes, ‘Recently, The Times of India reported that Gujarat with a nine per cent Muslim population has in its police stations a law-keeping force, 10 per cent of which is Muslim. No other state matches this figure. If this is not proof of inclusive governance, what is?’

Well, in 2002, the Muslims of the force were confined to police stations, and the 10 per cent figure is a reflection of an overall Gujarati reluctance to join the police. Why doesn’t Madhu Purnima Kishwar ask of this state, so given to patriotism, how many Gujarati soldiers have died defending Indian borders?

These are excuses to conceal the truth that Modi’s decade in power has seen the logic of the 2002 violence in Gujarat against Muslims pursued by other means. The violence then was as ‘efficient’ as his administration is now, and its aim was much the same. This ideology of exclusion is ingrained in Modi. As a member of the Rashtriya Swayamsevak Sangh (RSS) since a young age, he would know that Veer Savarkar had written, ‘…our Mohammedan or Christian countrymen who had originally been forcibly converted to a non-Hindu religion and who consequently have inherited along with Hindus, a common Fatherland and a greater part of the wealth of a common culture—language, law, customs, folklore and history—are not and cannot be recognised as Hindus. For though Hindustan to them is Fatherland as to any other Hindu yet it is not to them a Holyland too.’ By the very notion of ‘holyland’, this can never be true of Muslims or Christians, and hence they must forever lie outside the RSS’s idea of cultural nationhood.

Modi, a demagogue, combines the chauvinism of this worldview with an authoritarian streak. Those who believe that he will moderate his stance and become more inclusive are living out a fantasy. If he were to let go of exclusion and hatred, he would not be Modi.