The World of Modi

It is China, a First World power with a Third World mindset, that will test Modi’s still evolving art of internationalism 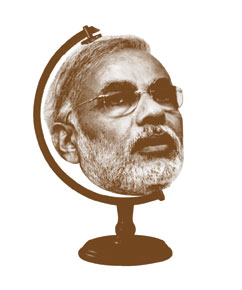 It is China, a First World power with a Third World mindset, that will test Modi’s still evolving art of internationalism

If the photo ops suggest that Prime Minister Narendra Modi is more accessible to people in Thimpu and Tokyo than to the folks in Delhi and elsewhere in India, it says something about the man. A man who loved political theatre, be it the costume drama of mass salvation or the high-tech vaudeville of election seasons. In all those years, when Delhi was the name of his struggle, when he was the lone evangelist of change, the spectacular fascinated him. Once in power, he abandoned theatre, and he was not the glad hander that you thought he would be either. He was rather remote and businesslike, and accessibility was not the method he chose to retain his intimacy with India. Then there he was, at home in the most exotic locations, enjoying every moment of it, even playing the drummer for the cameras. And by the way, we should remember that this was the man once known to the world not just through headlines such as the Miracle Ruler of Gujarat and the Moderniser in Race for India. He was also, according one headline from London, ‘The vegetarian who roasts humans’. Modi’s charm offensive has already changed the headlines.

But that is not the point. Modi Abroad marks a definitive shift in India’s engagement with the world, and the air miles the Prime Minister collects only show that he is as much interested in changing India’s conversation with the world as he is about changing India. Before him, India for most of its independent years did not deviate from the Nehruvian Third World ideal. It was an India that found its soulmates in bloated dictators of Africa and Arabia. Many of them were freedom fighters-turned-cannibals, and they named their postcolonial brotherhood the Non-Aligned Movement, which in practice was pro-Soviet and anti-America. Nehru was a global citizen, and the globe for him was divided between the coloniser and the decolonised. Even as the world changed, and even as history swirled around South Block, the Indian Establishment refused to break out of Third Worldism, a mindset conditioned by the received wisdom of anti-Americanism and the romance of the underdog. A decade after the fallen Berlin Wall, Atal Bihari Vajpayee, India’s first right-wing Prime Minister, shattered the idyll when he began a meaningful conversation with the US and caught up with the world after the Cold War. Manmohan Singh built on that, but it was another story that, even as he made himself redundant at home, he found a more rewarding job abroad as the wise old man of the East. In the end he was the brand ambassador of the East’s most misgoverned country, competing with the so-called banana republics for the corruption crown.

Modi’s hyperactive internationalism breaks the tradition. It is what one would expect from a leader who genuinely believes that foreign policy is an extension of national interest, that not ideological straitjackets but only ideas can win the twenty-first century world. He began with India’s near abroad, and it was more about reassurance and reaffirmation than big diplomatic gains. And hopefully he won’t be a captive to the regional joke called SAARC. Do the rituals, but don’t take it seriously, unless you want to reinvent it, which is a near impossibility considering the nature of its members. His real foreign performance was in Japan. The much talked about personal chemistry between Shinzo Abe and Modi (read the brilliant Open Essay by Tunku Varadarajan in the next pages) apart, it was the first movement of an Asian choreography in national interdependence. With Japan, India does not have to be as cautious as it should be with China; it is not mutual suspicion but, in the Modi-Abe era, the friendship of two nationalists driven by the same set of values that sustains India’s relationship with Japan.

It is China, a First World power with a Third World mindset, that will test Modi’s still evolving art of internationalism. Indian policy wonks and politicians suffer from a China complex, which is nothing but a symptom of low confidence in the possibilities of Indian democracy. Modi, being one of its most redeeming products, has no reason to be intimidated by the pinstriped social capitalists of Zhongnanhai. So when the new Chinese helmsman Xi Jinping visits him in Delhi this week, Modi should be talking to his guest as a personification of what some Chinese call the Fifth Modernisation they are being denied: democracy. Xi will become Modi’s equal only when he delivers what he has promised: the Chinese Dream, which itself is an echo of an idea Beijing is obsessed with, America.

America, of course. And India’s relationship with Washington should not be conditioned by the imagined Asian trinity of Delhi, Beijing and Tokyo. The anti-Americanism that was once nurtured by socialist India has already been undone by the shared sentiments of disparate societies. The most ardent voices of anti-Americanism have an American accent. President Obama, the world’s most powerful lame duck, may have a problem with Modi the former Chief Minister of Gujarat, but India and America are natural allies, united by the dreams, fears, and responsibilities of freedom, of democracy and their partnership should be more enduring than the current occupant of the White House. Time is on Modi’s side. So is history.