The most audacious journey in the politics of India comes to a historic finale as Narendra Modi, a lone man on a mission, inherits an India transformed by his ideas of modernity 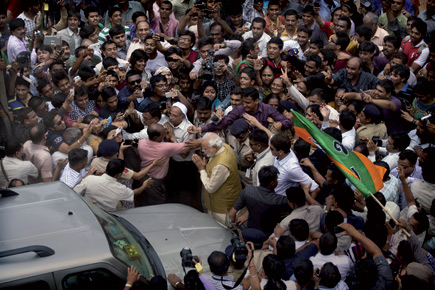 The most audacious journey in the politics of India comes to a historic finale as Narendra Modi, a lone man on a mission, inherits an India transformed by his ideas of modernity

History semaphores the journey of the boldest in politics. As one such journey reaches its destination, India is a nation transformed. Enraged by the accumulated humiliations of a decade, the lost years, India has listened to a lone man on a mission, and now that he is where he has struggled to be, it is no longer politics as usual. India has shifted. The cozy certainties of yesterday have been swept aside by the velocity of his ascent. And no politician in this country has undertaken such a picaresque through the mind of a people who admired and feared him in equal measure. Narendra Damodardas Modi, the winner of India 2014, is the story of our time, a story in which the power of one man’s will merges with the possibilities of a nation still dreaming.

There he is, standing triumphant amidst the ruins of a regime that had lost India even before the election. The rareness of his story is that, this moment is not marked by the enormity of the humiliation suffered by those who deployed the worst adjectives to demonise him but by the mind of the winner. In a country where unconcealed ambition is frowned upon by moral harrumphers, he played out his passion for power with a kind of flamboyance that may have alienated the grandees in his own party and a section of Indians, but it was a measure of his confidence, of his belief in himself, of his ability to defy every barrier built on the way. It was an exceptional sight of a man taking control of, and shaping, his destiny against the heaviest odds; in the end, he convinced the doubters that it is not always the case that history makes use of smart leaders. The smartest makes use of history, as Modi, the man who came from nowhere, the man who changed the conversation, did.

That is why Modi in New Delhi is made possible by the Modi for whom the Capital of India was another planet, of entitlement and entrapment, till 16 May. For more than six decades of Independence, the highest seat of power was inaccessible—and incomprehensible—to those who didn’t belong here. Membership was accorded by committees and cabals, backroom consensus and bloodline affiliations—it was an insider’s trade. Modi was elsewhere, not merely dreaming up his own Delhi, but challenging the limits of a political culture built on hierarchies and the wisdom of elders to achieve, or maybe even create, his own Delhi. This moment marks a cultural shift, the magnitude of which is unprecedented.

The making of one man and his belief system have become, for the first time in the political evolution of India, the national narrative of re-invention. A lesser man would not have gone beyond a mention in the glossary of political infamy. If it were someone other than Modi, he would have perished in the embers of Gujarat 2002. Modi maintained his balance even as the ground beneath him shook, for he was determined to travel far beyond the Sabarmati. In the first election he fought and won, the afterglow of 9/11 providing the backdrop, it was not development that he spoke, and it was not Gujarat that he was addressing—both were too obvious to be stressed. He was in a conversation with India, and he borrowed his metaphors from the global text of terror. It was his way of expanding his space in national consciousness. All the successive three elections he won in Gujarat were referendums on him, and by the time he achieved the hat- trick in his home state, he was already India’s most popular politician, and the only one with an argument for change. He himself became the argument, he made himself inevitable for the party and the country.

His 12-year campaign for India was the most audacious project undertaken in India by a politician, but he had that knack, like Barack Obama circa 2008, to turn his biography into national destiny. He was his own Michelangelo, sculpting his personal mythology to perfection. He was his own Boswell, writing his legend in tune with the spirit of the times. When Candidate Modi was the only viable option for his party to regain India, it was the mark of a man who would make himself the only One. Soon, he would make himself indispensable to an India crying out for leadership. On Friday, more fabulous than fateful, the triumphant Modi wrote the first notation of a new India, and his name would acquire the status of being an adjective to a nation that took the most defining Right turn. In retrospect, the age of Atal Behari Vajpayee was a pause, a redeeming pause nevertheless, in the Centre-Leftist march of India.

Prime Minister Narendra Modi is a brand new beginning for an India that was for long conditioned by the impulses of the Dynasty, which set the foundation of the socialist state. The loftiest part of Nehru’s nation-building was the creation of the New Man, socialist, scientific and secular, resistant to religion and nation. The New Man was just another socialist fantasy, which was certainly not a sign of national creativity. Indira Gandhi’s India was more pragmatic and less lofty, but the socialist state remained intact. Rajiv Gandhi may have dreamt of the technological possibilities of twenty-first century India, but he was not the one to repudiate the family enterprise in geneology and ideology. The filler governments by the so-called Federalists only made the Left-leaning India more provincial. Atal Behari Vajpayee, India’s first Right-wing Prime Minister, deserved more than five years to build a Conservative India; it fell on misplaced triumphalism. But the brave attempts in the demolition of Soviet- vintage Third Worldism and well-entrenched anti-Americanism put India on the right side of history—for a short while. After ten years of the Manmohan Singh embarrassment, India was ready for the redeemer. In a revolution that stretched from drawing rooms to boardrooms, from the marketplace to the mean streets of sectarian India, a nation is being reborn in the ideas of future. And this revolution is set to be remembered in an inspired—and inspiring—four-letter word: Modi.

So far, he was a national bestseller, manufactured and marketed by himself. Today, he is a synonym for change that continues to be multiplied in the mind of India— an India fast shedding the loose raiment of a socialist state, and ready to be indulged by a leader driven by the instincts of modernisation. It is the Right time to be in the Modi Nation.