The relaunch of Rahul Gandhi

The 56 days ‘Chintan’ has not changed Rahul Gandhi much and he has yet to become Rahul 2.0. But it’s a marketing strategy that seems to be working for Congress as of now 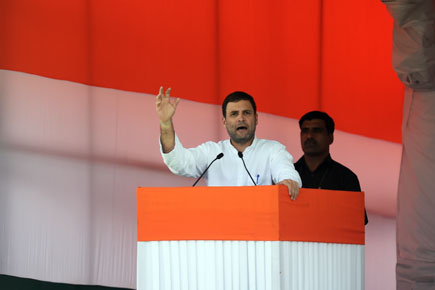 After the much-hyped vacation of Congress vice president Rahul Gandhi, the latter needed a platform to reconnect with the people, to show the disappointed Congress workers that the leader is there to lead them. With a rally of farmers in Delhi on Sunday, the party set the right platform for him to make a come back and achieve things he lost in his 56 days leave. In fact, the party leaders looked more excited than Rahul himself on his come back. Rahul did start

well but more was needed from him. And yes! The 56 days ‘Chintan’ has not changed him much nor has he become Rahul 2.0. But it’s a marketing strategy that seems to be working for Congress as of now.

The Ramlila ground was getting ready for Rahul’s address

right from the morning. Group of farmers were reaching the ground shouting slogans against the Narendra Modi Government. Congress leaders from different states were given responsibility to get farmers in large numbers and they didn’t let party high command down. Congress general secretary Digvijaya Singh was the in-charge of the rally preparations and was quite happy with the crowd when he took the stage. The party claims that the total gathering was over 2 lakhs.

However, the realistic number was little over 1 lakh. Congress leaders from nearby states occupied the first few rows close

to the stage. Their faces beaming with confidence and relief that now they don’t need to answer

un-comfortable questions on whereabouts of Rahul Gandhi. But there also they couldn’t control their fractional rivalries. When Haryana Congress president Ashok Tanwar started speaking, supporters of Bhupinder Singh Hooda jeered him. Throughout his speech the pink turban supporters of Hooda spread all over the ground kept on shouting slogans. Probably this was to show the senior leadership as who gets the crowd with him.

From his very first line in the speech, Rahul attacked Prime Minister Narendra Modi. In between he referred to the pointers that he has brought with him and he was quite updated. Rahul raised questions on Prime Minister’s recent comment in Toronto, where he ad said that he is cleaning the mess created by previous governments. Rahul spoke about Land Acquisition Bill and point wise tried

to make the farmers understand what are the changes in the new proposed Bill. His speech was centered on targeting Narendra Modi and he did unleash whatever he could have.

from industrialists for his campaign and marketing and now he wants to repay them with this new bill. There were few things which he mentioned for the first time and that also gave a roadmap of what the party wants to do in near future. “Whenever there will be a fight for farmers, you would see a Congress party leader standing by your side. You would see a Rahul Gandhi fighting with you on street,” were his words. This became clearer when Digvijaya Singh urged Rahul from the stage to travel across six lakhs villages of India to lead the fight of farmers. Congress party was planning

a ‘Padyatra’ of Rahul Gandhi to be started from Sarnath in Uttar Pradesh. Now the place and dates will be announced shortly after discussion with Rahul Gandhi.

Rahul was no different in his style of speaking. He spoke like he always does and it would be difficult to identify new elements in his personality post-vacation. Yesterday when he was meeting farmers, he looked more charged up with a clean shave. Today he was back in his stubble. On one or two occasions, he lost his words, he stammered but he was in better control than his previous public appearances. Now a big test of his branding will start

from tomorrow when he would attend the parliament session. Congress leaders are celebrating but they are few who still have a doubt despite a better show today. “Today’s speech of Rahul Ji would encourage, energize and inspire Congress workers to come out and speak for the party,” says senior leader Sandeep Dixit. “But I would still maintain that it is Sonia Ji’s leadership that Congress needs at the moment. However Rahul Ji has the potential to lead the party in future.”

Compared to Rahul, Sonia Gandhi was in better control of her speech. While Rahul focused on Land Bill and Narendra Modi, Sonia extended pleasantries for other opposition parties knowing well that their support would be crucial going forward. She thanked the opposition parties for supporting Congress in the fight against the current

Congress is aiming to win the trust of Indian people through making a pitch for the farmers and dalits. The last one week has witnessed couple of events where the party tried

to show their strength be it the rally in Mhou on ‘Ambdekar Jayanti’ or today’s farmers rally. Much would depend upon how the party takes this forward. There are plans

to launch attack on the government for the problems of middle class especially in the cities. The planning

has always been good but it is the execution and the participation at the top level that has troubled Congress in the past.

now, the Congress can celebrate the success of farmers' rally. Lot of farmers Open

Land Acquisition Bill. Some of them were carrying rotten wheat with them to show the damage done by the unseasonal rains. They are hopeful that Rahul Gandhi will help them in getting better compensation for their crop damage and protect their land from forceful acquisition. It is this trust that Congress needs to build on. The people, the army and the lieutenants are ready. It is the commander i.e Rahul Gandhi who needs to show promise. If he does it now, it’s better. Otherwise the leader and the party will become irrelevant.