The State’s war against the Naxalites boils down to just this: the poor fighting the poorer. 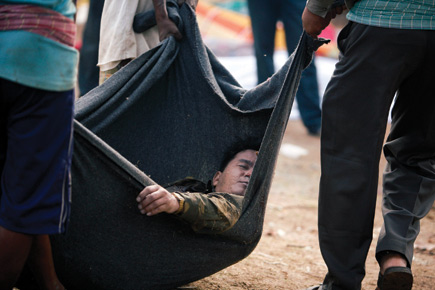 The State’s war against the Naxalites boils down to just this: the poor fighting the poorer.


What does it all finally boil down to?” said Soma. “Some very poor people killing some slightly less poor people.” We were talking about the Maoist attack this week in West Bengal, which killed 14/16/18/20/21 (no one, the morning after, seemed to be sure of the exact number) army jawans. Most of the jawans, one suspects, were there not because they wanted to save the country, but because they wanted to earn a living, some sort of living. The Indian army is facing a crisis of officer-grade material—quite simply, not enough good people are interested—but there has never been a shortage of jawans; there are enough impoverished families in India whose sons are willing to put their lives on the line so their families can have two decent meals a day.

The Naxalite movement in Bengal in the 1960s and 1970s possibly ended up killing more traffic policemen in Calcutta than anyone else. As a child, coming back home on the school bus one afternoon, I saw three men rush out of a parked taxi at one of the city’s most prominent junctions and cut down a constable directing traffic with swords. I still remember watching, terrified, the men running back to the car with swords dripping blood held high. Thirty years later, when I met Kanu Sanyal, legendary leader of that era, at his home in Naxalbari, he told me: “We were wrong. Revolution and equity for all cannot come through killing traffic constables. They are as oppressed by the system as landless labourers.” Just to put things in perspective: in Bengal, a constable gets the first chance of promotion after 18 years of service. If he is very competent (or very lucky), he will reach retirement age after only one or two years as deputy superintendent of police. The traffic constable stands in the sun and the rain for a pittance, performing a thankless job. So, of course, he is likely to be corrupt.

The jawans who died this week were as much victims of our iniquitous scheme of things as the men who killed them. But, of course, they were different from the traffic policemen who the Naxals targeted so many years ago. These jawans were armed and had orders to kill. Whether Operation Green Hunt is officially on or not, ground-level war is in full swing. We get to know only of the Maoist attacks and the deaths of our policemen and soldiers, and hardly ever of the killings that our forces rack up. However, according to credible sources, at least a dozen ‘Maoists’ are being killed every day. Some of them, inevitably, would be innocents. But how does a jumpy paramilitary man, in unknown and difficult terrain, fighting a guerilla force, distinguish between a harmless villager and a man out to put a bullet in him? A moment’s hesitation could mean the difference between life and death.

And the death of innocents fortifies the Naxalite resolve; it brings in more helpless people into their fold.

This is the great tragedy of the wars we are fighting inside our own country. The barely enfranchised kill the disenfranchised or get killed. The State has failed to provide for a life of the merest dignity to vast swathes of Indians, and a part of them are assigned to take care of the problem that the other part poses. The barely enfranchised, in turn, use their power over life and limb to exploit the disenfranchised by harassing and terrorising them. The disenfranchised then hit back, when they can, as violently as possible, because they have nothing to lose but their lives. Psychologically, they have the upper hand, because the barely enfranchised care about their lives. From the top of the hierarchy of the State to the very bottom of our pyramid, where there are no rights, no hopes, no growth, only misery and hunger, the shit just keeps flowing down relentlessly. That is the true trickle-down effect in India.

So it goes, as Kurt Vonnegut famously wrote in Slaughterhouse 5. And so, it seems, it will go on.