When will world leaders act with alacrity in the battle against global warming? 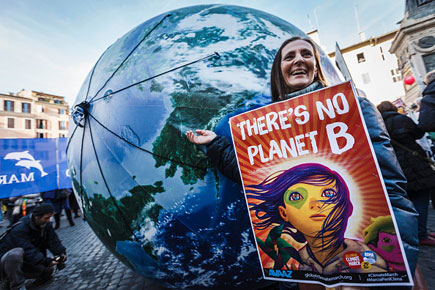 Paris, these days, is the focus of disquietude and contemplation. Last month, it was in this city that a war on terror was declared again. Today, Paris is centre stage as the host of a global discussion on the fate of our planet. World leaders have gathered to chart a road map, a strategy to fight this ‘war’ against climate change. In the sombre environment left by the barbarous terrorist attack on its soil, a battle plan is being drawn up to fight the horror that carbon emissions will wreak across the world if they are allowed to go on at their current rate.

Representatives from all over the world are busy with climate diplomacy, since every country does not agree on what must be done, and pressure is high to reach a consensus. Since 1992, planet savers from around the globe have met in Berlin, Kyoto, Buenos Aires, Marrakesh, New Delhi, Milan, Buenos Aires, Montreal, Nairobi, Bali, Copenhagen, Doha and Lima. They meet, argue and shout in the hope of forging agreements and protocols for the future of Earth. Such talks in the past have given us the 1992 UN Framework Convention on Climate Change and the 1997 Kyoto Protocol.

The Kyoto Protocol was treated as a watershed movement at the time in its bid to slow global warming. But the treaty finalised that Japanese city in 1997, after years of negotiations, came into force only in 2005. And the result since has been disappointing. Its commitments were not met and the world’s leading economies started to backslide. Along with the US and China, India too had become a big contributor to the problem. Some of the progress that Europeans claimed to have made was on account of closing inefficient industries in the former Soviet bloc.

For the past two decades now, delegates have been trying to hammer out a way to cut emissions and stop the drilling of fossil fuel wells. But in the real world, the mantra in practice is still ‘drill, baby, drill’ from the Middle East to the shale oil fields of North America.

If fossil fuel consumption does not go down, we are warned, then a polar cap meltdown may not be very far away. Every single year so far this decade has been hotter than every single year before 1998, with 2015 being declared the hottest year on historical record. Climate patterns in India already seem to be badly affected, with Delhi’s winters taking longer to set in this year and Chennai suffering a harrowing flood. The threat is dire and the clock is ticking. Climate experts say we all have about 30 years before burning more carbon causes a dangerous rise in the world’s mean temperature. In the words of Christiana Figueres, a UN official, “There’s an emergency on climate, [so] let’s just cut to the chase.”

Now that the 2015 United Nations Climate Change Conference is under way in Paris, the question is: will it be just another conference that ends in negotiations to be pushed forward for another year?

At the onset of COP21, optimism prevailed in Paris, as we saw world leaders coming onto the same platform, singing the same hymn, and speaking of their intention to work together. That’s the beginning of something concrete—being on the same page. Isn’t it? But therein lies an irony, and at the end of two weeks, we might see divisions and cracks everywhere.

The leaders understand the political nature and difficulties of this messy real world challenge, one they themselves have created. But the truth is that all nations care essentially only about themselves. We are selfish and conflicted, and so each country represented in Paris is concerned about limiting carbon production only to the extent that does not damage its own economy. And yet, each nation also wants all the others to limit carbon emissions in order to contain climate change.

The conferences of the past have all ended in weak promises and little concrete action. But this year’s summit in Paris holds out extra hope since negotiators had agreed in 2011 that a deal had to be done by the end of 2015. The delegates of more than 200 countries are thus under pressure to reach an ambitious deal to limit future emissions and slow the temperature increase. Will they succeed? Will China, India and the US, considered the supervillains of the environment, relent?

After all, the risks to the planet are rising sharply and the need of the hour is a fresh start to climate diplomacy. It’s a global problem, an existential threat with sweeping economic implications. Reducing greenhouse gas emissions would require the transformation of many a country’s economy.

Undoubtedly, the new world order is plagued with daunting problems, be it terrorist threats, armed conflicts, faltering economies, or this—climate change. They are all largely man-made. But no problem is more pressing than that of a planet in peril. The leaders who have gathered in Paris, therefore, have to end the deadlock and take swift action. If air raids and bombs can be dropped at the spur of the moment, why can’t decisions on global warming be more prompt and ambitious? After all, the fate of about six billion people is at stake.