The Limits of Man 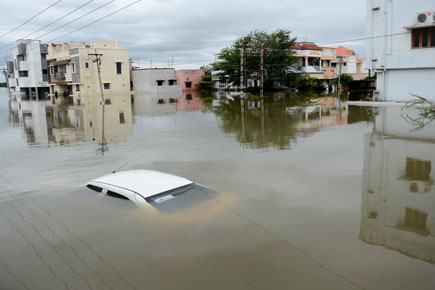 It was 10 years ago that I had spent the day in a South Mumbai office completely unaware that the biggest rainfall that the city had seen in a generation was underway. By evening, when it was time to return, the trains had stopped. I saw a movie and when I came to the station late at night, the trains were still not working. But in that part of town it looked normal; it was the rest of Mumbai that had drowned. I caught a bus and after Dadar when the city proper ends, it began to crawl and finally stopped, joining a long line of vehicles that stretched forever. When I got down and started walking early morning, it was as if I was in a war movie. Empty trains marooned on tracks, streets underwater with people in single file at its edges as if refugees. I must have walked 20 km before reaching home. The city stayed shut for days.

Then there was the anger targeted towards the state, for not modernising the storm water drains, not filling in potholes which killed many and the absence of disaster planning. All of which we now see echoed in Chennai, as the city remains under siege by nature. But the plain truth is no city can withstand an extreme weather event. The best storm water drain system couldn’t have helped Mumbai that day and neither could Chennai have factored in what it is witnessing today. If Mumbai had seen rainfall of that intensity every year for a decade, in the eleventh year we would be prepared, but that is not how it happens. Extreme weather is by definition a rarity. It does not absolve the government of incompetence, but that is how the system works in India and it won’t change because of heavy rains. What changes is our expectation of governments, which is usually very low and rightly so.

Because of the climate change conference in Paris, the Chennai downpour is being linked to global warming. There is actually no evidence of it. This rain is said to have just broken a record of 1918. It also means that it did rain almost as heavily back then. Was that due to global warming, a phenomenon amplified only during the last few decades? An article in Wired last month spoke of a research study that is trying to connect climate change and extreme weather by looking at 28 such events of 2014, with not much success. They had some correlation with heat waves, but, the article noted, ‘drawing the connection between warmer temperatures and more complex weather events like drought, flooding, hurricanes—or even the expansion of the Antarctic ice sheet—is way more difficult.’ It quoted the editor of the report, a climate scientist with the US agency National Oceanic and Atmospheric Administration, as saying, “For events like that, it’s not clear that we have an established agreement in the scientific community.”

Some of the frustration following such events comes from our great confidence in being able to tame nature, to outwit it through technology and social engineering. And we have been successful in it: the light bulb and air conditioner are examples. But when, once in a while, nature mounts a furious offensive, it is best to take it with heads bent down and pray that we come out of it with as little damage as possible.