The Irony of This War

Despite Obama’s strong words, the West is still groping for a response to Islamic State 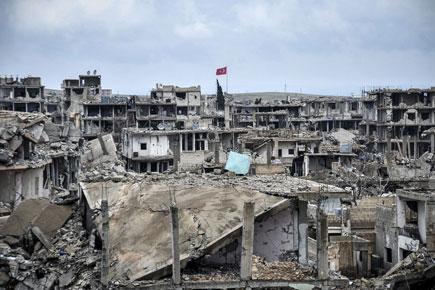 From the same spot in the Oval Office where George W Bush spoke the night of 11 September 2001, Richard Nixon resigned and John F Kennedy talked civil rights and the Cuban Missile Crisis, US President Barack Obama addressed his nation on the night of 6 December  in a prime-time attempt to calm growing fears that the Islamic State (IS) is expanding its ambitions to include more attacks in the US and Europe. Coming in the aftermath of the massacre of 14 US citizens attending a holiday party in San Bernardino, California, by a self-radicalised married couple who pledged allegiance to the terror group online, Obama’s speech called for a review of a US visa programme for new immigrants even as he continued to insist that his strategy to deal with the IS is the right one.

That strategy has launched over 8,000 airstrikes against the group over the past 16 months in Iraq and Syria, killing upwards of 20,000 fighters, according to various estimates. The latest round of US strikes hitting Syrian oil fields and ISIS oil tanker convoys and dubbed Operation Tidal Wave II is aimed at cutting off the IS’s oil revenues, estimated to be hundreds of millions of dollars a year. Till recently, US warplanes had been going easy on Syrian oil infrastructure, but now all bets are off. The Obama Administration is also now using the US Joint Special Operations Command to launch targeted raids against the IS leadership across Iraq and Syria, emulating the way US commandos had earlier torn through the ranks of Al Qaeda in Iraq and the Taliban leadership. But those moves have failed to stem the influx of foreign fighters flocking to the group’s cause and stop affiliates in Egypt, Afghanistan, Libya and the Caucasus from springing up and pledging fealty to the group’s leader, Abu Bakr al-Baghdadi.

The fight against the group will be a long one, Obama said in his speech, warning that “we should not be drawn once more into a long and costly ground war in Iraq or Syria. That’s what groups like ISIL want,” using an alternate name for the group. “[They] know that if we occupy foreign lands, they can maintain insurgencies for years, killing thousands of our troops and draining our resources, and using our presence to draw new recruits,” he added. But Obama remains under tremendous pressure to demonstrate that he indeed has a strategy to deal with the IS and that it is working. His critics are becoming more vocal about his ‘weak leadership’ even as his supporters urge him to convey the sense of urgency that most Americans are feeling.

America’s allies in Europe are ramping up their defences, but in the absence of US leadership, they seem clueless about the viability of their efforts. With police raids and violence becoming a daily occurrence, Europe remains a continent on edge. Interpol is reportedly tracking more than 5,800 people suspected of travelling from Europe to Syria to fight there. After the horrific violence in Paris on 13 November that left 130 people dead and scores injured, the French authorities are ramping up their intelligence networks. The identification of Abdelhamid Abaaoud, the suspected planner of the Paris attacks, raises serious questions for the country’s security services. He was high on French and Belgian ‘wanted’ lists and yet managed to travel from Syria to the heart of Paris without leaving a trace.

Belgian authorities have been conducting their own regular police raids, tracking down people with links to Bilal Hadfi, one of the Paris attackers. Sweden is also on alert; authorities there have raised the nation’s threat level, citing ‘concrete information’ on a possible attack. Britain is bracing for violence as well after joining the bombing campaign in Syria. After a gruelling ten-hour long debate last week, the British House of Commons overwhelmingly passed the government’s resolution by 397 to 223 to authorise air strikes against the IS in Syria; 67 opposition Labour MPs, including several members of the shadow cabinet, voted with the Conservative government to back air strikes after they were given a free vote by the Labour leader Jeremy Corbyn whose pacifism has put him in a minority within his own party. The gesture by the UK is largely of symbolic value, but it is an attempt to signal a united resolve by the West to tackle the IS menace.

Great power politics in the Middle East, meanwhile, has taken a new turn. After finally announcing that the 31 October Metrojet crash in the Sinai was caused by a bomb, Russia has begun bombing IS targets in Syria in coordination with France. Russian President Vladimir Putin and French President François Hollande have agreed to coordinate airstrikes after meeting in Moscow last month. Russian officials notified the United States in advance of the strikes, marking the first time that the US and Russia have used the deconfliction protocol agreed to in October.

Hollande had hoped to build bridges between Russia and the US, but forging a solid military partnership between the three countries in the fight in Syria remains a tricky business. Not only do American and Russian officials have different goals—the ouster of the regime of Syrian President Bashar al-Assad versus propping up, at the very least, the ruling apparatus around him—they have also been arguing over who is doing a better job in bombing legitimate targets in Syria. France and Russia may have just suffered grievous blows at the hands of IS operatives, but the wrangling for influence in a critical part of the world between Washington and an increasingly assertive Moscow will likely determine the future of the conflict. One of the major problems is that Russia and the US each refuse to accept how the other is waging the war. While Saudi Arabia has invited the Syrian militant group Ahrar al-Sham—which has in the past allied with the Al Qaeda affiliate Al Nusra Front—along with more than 90 other Syrian opposition representatives to Riyadh this week, as a precursor to the major power talks scheduled for 18 December in New York, Russia wants Ahrar al-Sham to be added to the list of terrorist organisations that are excluded from peace talks.

Not surprising, therefore, that contradictions abound in the West’s approach. The US Defense and State Departments have agreed on a $1.2 billion deal to sell Saudi Arabia 22,000 bombs to help the kingdom restock its shelves after months of bombing Houthi positions in an increasingly controversial air war in Yemen. An offensive by over 2,000 Syrian Arab fighters in eastern Syria pushing to take control of a main border crossing between the two countries has also begun. The fight is led by a new umbrella group that calls itself the New Syrian Army, which operates as part of the Authenticity and Development Front, a moderate Islamist grouping that claims 2,200 fighters operating in different parts of Syria. A conservative Saudi militant, Khaled al Hammad, leads the group, parts of which have won US backing, arms and training, because they effectively fit the US restrictions that their first aim must be to fight the IS and not the government of Assad.

The dangers posed by the IS are now clearly evident. Yet it has not been enough so far to bring Washington and Moscow to a common understanding of the threat facing the West and the wider world. The clock, however, has turned a full circle for Obama. After declining to use the term ‘war on terror’ in an effort to distinguish his approach from his predecessor’s, in his address on 6 December, Obama finally conceded that, “Our nation has been at war with terrorists since Al Qaeda killed nearly 3,000 Americans on 9/11.” Somewhere, Osama bin Laden must be enjoying the irony of it all.