Google’s war with China is in reality one between competing ideas of society. And we must be ready to choose the right side. 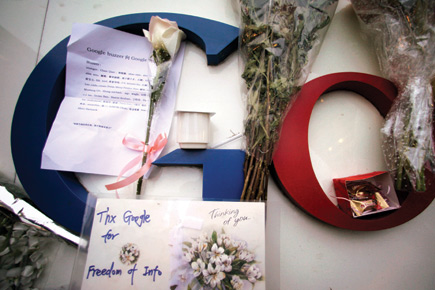 Google’s war with China is, in reality, between competing ideas, and we should be clear where the evil lies.


An Indian official back from China recounted his first encounter with the ‘Great Chinese Firewall’. His wife had sprained her ankle and he was searching for a home remedy. For some reason, the long list generated in response to his search included a Nasa site. The screen suddenly dissolved before his eyes, and when the image reappeared, the Nasa site was missing. This was several years ago and today, the Nasa website would not even show up. The ‘Great Chinese Firewall’ is the foundation of the most effective censorship regime in human history.

It is a regime in which major internet companies such as Yahoo! and Microsoft have been collaborators. They have followed prescribed norms of self-censorship that blocked access to specified sites. In some cases, they have gone further, with Yahoo! being accused of providing e-mail records and ID numbers of pro-democracy activists to the Chinese authorities.

Of all these companies, Google has been the most reluctant, with its founders, Sergey Brin and Larry Page, opposing the decision to collaborate with the Chinese. Google chief executive Eric Schmidt, though, unwisely overrode their opposition in the name of pragmatism. Now, the uneasy relationship between the company and government has finally come apart after attempts were made to hack Google servers to obtain exactly the kind of details Yahoo! has been accused of providing the Chinese government. Google’s ensuing decision to pull out of China, admirable as it is, must not remain an exception. Other companies and governments have to realise what is at stake, despite the lure of the huge Chinese market.

The Cold War continues to be seen as a battle between competing economic systems that ended in the victory of capitalism. But the real reason many of us still welcome the outcome of the Cold War has to do with the nature of societies involved. Marxism, by its very nature, implies a concentration of power, with a resulting authoritarianism that marks a closed society. Ranged against this bloc were open societies with a tolerance for dissent, or to use Karl Popper’s succinct definition, societies where political leaders could be overthrown without bloodshed. It also happened that these open societies followed a capitalistic model for their economies.

However, as events have since shown, capitalism by itself does not imply an open society. Singapore is the obvious counter-example, but it was seen as an exception. Now China, and, to a lesser extent, Russia have shown that authoritarian capitalism remains a viable option. This should hardly come as a surprise. Closed societies such as Nazi Germany had a happy relationship with capitalism. If a continuity has to be seen between World War II and the Cold War, it is because both were battles between open and closed societies.

There are those who will argue that this distinction is not as clear cut. Noam Chomsky has insisted on the manufactured consent that subverts public opinion in most democracies through the control of media and advertising. Important as this fact is, it really does not compare with the censorship the state exercises in closed societies. This should be evident to anyone concerned with the dissemination of information through the written or spoken word. Or, to put it another way, critics of open societies can comfortably find a home within these societies—the US can house a Chomsky and India an Arundhati Roy—while critics of closed societies such as China are forced to find refuge elsewhere in an open society.

The increasing global assertion of its power by China is evidence enough that this battle has not been fought to its end. In fact, with the adoption of capitalism, China is certainly not handicapped by the inefficiencies that destroyed the USSR. And given the size of its economy, it is not dwarfed by the US in the same way Germany and Japan were during WW II. But the war with China is neither likely to be fought militarily as was WW II, nor will it involve arguments about the nature of markets that obfuscated the real divide during the Cold War.

It is a truism to term our times the Information Age. In insisting that Google pull out of China and live up to its own mantra of ‘don’t be evil’, despite the obvious consequences in terms of the market, Sergey Brin has done us all a favour. This is not war between Google and China. It is one between competing ideas of society and we should be clear where the evil lies.