Our Conscience Is Their Only Home

The Caliphate of Hate cannot be undone by military power alone 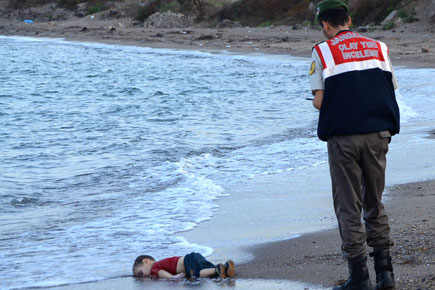 Sometimes it takes the image of a toddler washed up on a Turkish beach to introduce us to the inherent inhumanity of our times. Aylan Kurdi, three years old, could not make it while fleeing a Syria caught between various fighters of ‘freedom’; he, along with his mother and brother, was among the unlucky ones who could not reach one of those refugee camps swarming with the living detritus of the struggle between the builders of an Islamic empire and all kinds of rebel groups propelled by Western powers. The frozen face of Aylan made the familiar starker—and helped the world partly regain its conscience.

The familiar: Perhaps an exodus of this proportion has not happened since World War II, but for a while the refugees multiplying in camps in Budapest and elsewhere in Europe remained the disposable human remains of a ‘crisis’. They brought to our notice that a large swathe of the Middle East has become unlivable except for foot soldiers of gods or armies of dictators, but the global attitude in general was indifference. Germany, as usual, was more magnanimous than other countries, including America and Britain, in welcoming the refugees; the others are still deciding on the numbers they can take.

The enormity of the human tragedy apart, this is a moral crisis too. The refugee—or the asylum seeker—is the story as well as the storyteller. In the last century, the tragedy of the Jew told us about the horrors of a political system for which the survival of the racially superior required the elimination of the weakest. For the Führer of the Final Solution, that was the law of nature, or Darwinism as a political process. As Timothy Snyder, the author of Black Earth: The Holocaust as History and Warning, writes, ‘Races should behave like species, like mating with like and seeking to kill unlike. This for Hitler was a law, the law of racial struggle, as certain as the law of gravity.’

Today’s ramshackle boats sinking under the weight of desperate Syrians are culturally linked to the cattle trains that still trundle along in the memory of Europe. The Syrians who are escaping the civil war are victims of a similar struggle which, unlike the earlier one, is led by sanguineous gods. It goes on. The history of revolutions and freedom struggles—both need an enemy enlarged to suit your fantasy—is incomplete without the dehumanising tales of displacement. From Maoist China to Stalinist Russia, from Vietnamese boat people to Bosnians in the post-communist Balkans, and not to speak of our own Partition, the story of the Other, always bloodier, merges with the larger narrative of freedom, a word that is perpetually in dispute.

The refugee is the human cost of that word in dispute. The hesitant benevolence of the West only shows that the world is not in a mood to share the human cost of territorial wars, no matter it is waged in the name of God or ideology. Maybe this is also the moment to realise, once again, that the difference between a refugee and an immigrant is a matter of a signed sheet of paper. Both are escapees, and chasing hope. Maybe we should also acknowledge, once again, that the history of the West, particularly America, is shaped by the immigrant who has never stopped dreaming. A repudiation of its own essential goodness by the West will be a betrayal. It will be about denying Aylan justice even in his death.

That said, the humanitarian responsibility of the civilised doesn’t end with the question of refugees. The larger question is the Islamic State, which has withstood the power of NATO—or, more aptly perhaps, mocked the combined ineffectiveness of Western powers that do not even seem to have understood the nature of the beast they are dealing with. As an anonymous contributor, a former official in a NATO country, wrote in The New York Review of Books, ‘Nothing since the triumph of the Vandals in Roman North Africa has seemed so sudden, incomprehensible, and difficult to reverse as the rise of ISIS.’ What is pretty clear is that the Caliphate owns a third of Iraq and Syria, and its territorial expansion is matched by its cultural vandalism in the historical Syrian city of Palmyra—another version of the Taliban’s Bamiyan monstrosity. The Islamic State, like any other enterprise of fear, may not last; but as long as it is there, the only home for children like Aylan Kurdi is our conscience.

PS: More than a thousand Indian Islamic scholars and clerics condemning the ISIS barbarism is commendable. The silence of what Ayaan Hirsi Ali calls the Mecca Muslims (as opposed to the fanatical Medina Muslims) only amplifies the war cry of the jihadist. The Caliphate of Hate cannot be undone by military power alone. It requires a counter-argument that should come from the saner majority of a religion that wields the knife and the Book with equal zeal.