Of Colonial Minds and Other Demons 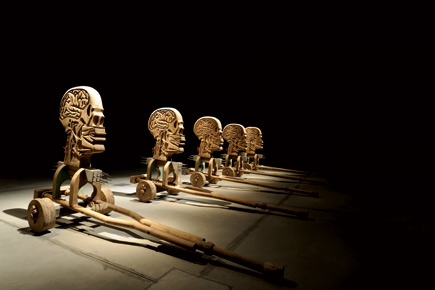 For second-generation Indian-Americans like me whose parents left the country in the 1960s, Indian independence is more of a peripheral emotion than something tangible. We can understand it from the oral histories of our parents and grandparents, but the actual celebration of Indian independence across the Diaspora—replete with festivals, flag-waving parades and other social gatherings—still tends to befit the idea of a nationalistic aesthetic. That’s why writing about this issue is a mixed bag for me: I’m both physically and emotionally distant from yet intellectually engaged with the idea of an independent India.

While the concept of Indian independence—and the reality of Partition for those whose families were impacted by it—becomes more distant with every generation within India (and even less significant for those living outside), the expanse of the Diaspora remains beholden to and in many ways imprisoned by the legacy of colonialism. Every

major discussion about Indian—or South Asian—identity, as well as the politics that revolve around them, seems to spring from the colonial framework, driven by and defined by it.

When Indian-born scholars such as Gayatri Spivak or Homi Bhabha—drawing from the ideas of the late Edward Said—talk about the ‘postcolonial’ position, they seem to emphasise the ‘post’, when it’s still questionable whether we have actually gone past. Indeed, colonialism is like a zombie to the Diaspora—not alive but not dead either. Like the undead, it keeps coming back because we keep denying it exists. When I speak to young Indian-Americans about colonialism, I often feel that we’re having a conversation inside a barn surrounded by zombies. We know the undead are all around us, yet we seem to ignore or downplay their presence (cue your favourite horror movie).

Within India, the denialism seems to be much stronger because independent India was tethered to the British colonial era. Many of India’s leading nationalists were either Macaulayites or devotees of Harold Laski, the British political mind whose ideas of secularism were digested in full by leaders such as Jawaharlal Nehru and Krishna Menon (though Laski himself was a proud Zionist). As a result, India’s intellectual development was monopolised from the very beginning by those who, unwittingly or not, embraced the Macaulay idea of ‘persons Indian in blood and colour, but English in tastes, in opinions, in morals and in intellect’. Indeed, the independence movement thinkers rejected British rule but sought to mimic British views and society-building paradigms. Concepts of secularism and religion, sex and sexuality, and even caste and class, were driven almost exclusively by the colonial narrative.

Historian Ramachandra Guha has written about what this sort of intellectual development has done to the study of Indian history, noting it has been encrusted into a rigid partisan and ideological binary: you are either a Marxist or a right-wing Hindu (or, like Guha, a Nehruvian), thereby precluding anyone who falls outside those categories. Not only has this made discourse next to impossible, it has shrunk the potential for debate and turned India’s intellectual class into a caricature of itself. Many Indian intellectuals, particularly on the left and living outside of India now, chase a Hindutva bogeyman, in part because they were never able to separate the religion from the political ideology or adapt to the changing discourses on religious identity that have shaped the Diaspora. To them, Hinduism and Hindutva are one and the same, whether you live in India, Bhutan, Bali, Guyana, Sri Lanka, Trinidad, the United Kingdom or the United States.

As Shiv Visvanathan wrote several months ago, India’s intellectual class never seemed to accept the fact that religion could co-exist with rationalism.

This is why colonialism remains the zombie gnawing at India’s intellectual, social, political and cultural fabric. Very few Indians are appreciative of the expanse of colonialism’s influence. Some on the right—particularly Hindu right-wingers—have disproportionately cast blame on colonialism for everything that ails India, while others on the left have framed their own critiques of the Indian state from a Eurocentric binary. It has thus become extremely difficult to have an organic, homegrown assessment of what India is and what it means to be Indian today. Indian independence still seems to be fraught with a sort of Stockholm syndrome when it comes to developing a post- European framework of dialogue.

One of the most devastating consequences of colonialism is India’s collective failure to tangibly understand its impact, and how virtually every aspect of society has been impacted to the core by the colonial era. Indian bureaucracy, jurisprudence, and its magnificent— and often decaying—physical structures are all vestiges of the colonial mastery over natives. Ironically, the nearly three centuries of sustained colonialism— whether done indirectly through British, Portuguese or French trade administrators or directly through each country’s rule—was not syncretic. Colonial administrators might have borrowed ideas or tried to placate communal disputes, but there was never a semblance of discourse or equal exchange of ideas. Colonial frameworks were imposed upon Indians.

In many ways, Indians became what Frantz Fanon described of the plight of the natives in France’s African colonies in the 1960s: perpetually inferior and unable to break away from the psychological bondage of the mandate of French superiority. It’s what many scholars later termed ‘internal inferiorisation’. Indians were educated in missionary schools, socialised under norms that the British—and, to much lesser, localised degrees, the French and Portuguese—reified through laws of that era. Even India’s history, one that is being debated by what Guha calls ‘captive ideologues’, was written primarily by the British or those schooled by them. The study of Hinduism was defined by missionary frameworks. This isn’t to discount the Orientalist perspective as a legitimate view, but it’s also ludicrous to downplay the influence such a perspective has had in shaping how Indians understand Hinduism which got conflated with caste and ritualism—two things that Indian independence leaders wanted nothing to do with.

As such, the study of Hindu thought became stunted within India—and lampooned by many intellectuals—and began to flourish outside, which is likely why many Hindus in the West Indies, South Africa and even the United States are much more philosophically versed in Hinduism than their counterparts in India. It’s why so many Hindus in India—particularly among the educated elite—are reluctant to identify themselves as Hindu for fear of violating some rhetoric of secularism. Similarly, even the exchange of ideas among Indians of different religions (and non-beliefs) has become essentialised to a narrative of communalism.

And this is the rub of discussions about India’s relationship with its colonial past. Like an abuse victim, the country has collectively repressed the extent to which colonialism left a self-sustaining—and traumatic—imprint on the country’s psyche and the views of its post-Independence Diaspora. To many, the British continue to be seen as a civilising force that somehow managed and mollified communal tensions, when in fact, the opposite was more often true.

The British imposed a sustained campaign of psychological violence matched only by the pilfering of the Subcontinent’s natural resources and cultural wealth, and they exacerbated—and in some cases helped create—the communal tensions that have played a significant role in the country’s social and political narrative over the past 60-plus years. Even India’s controversial laws, such as its archaic ban on homosexuality, are relics of that colonial past.

Perhaps the most troubling impact of colonialism’s zombie-like presence is that India’s post-Independence race to modernity has been shackled by a regressive discourse that frames the West as an ideal to mimic. This is the modern aesthetic—a binary in which mimicking Western patterns of consumption is somehow tantamount to progress. Indeed, the ideological battles over ‘Westernisation’, and the frequently moronic comments from Indian politicians about its evils, actually divert attention from a larger issue: the inherent belief of Indians that modernisation and traditionalism are inextricably intertwined with the East-West dichotomy. Such a belief premises progress upon the notion of conspicuous consumption being the great liberator. By this logic, wearing short-shorts or dancing to Pharrell’s Happy is somehow progressive, as opposed to substantive efforts like an intellectual deconstruction of Kabir or the eco-feminism of Vandana Shiva.

This isn’t to say that we need to be angry at the British—or the French or Portuguese, for that matter— and rally to demand reparations. But what we must do, if India and its Diaspora are to progress holistically, is to acknowledge the trauma and work to address it in a constructive way. That would mean processing the extent to which the country’s psyche and that of its people have been profoundly shaped by the rule, norms, and biases of ‘Others’. Perhaps then we can achieve true independence and stop measuring ourselves by the way others have defined us. Until that happens, however, we are still staring into the mirror with the zombie staring back at us.