My Name Is Khan, Too

Unlike the majority of Muslims for whom travelling has become an intimidating prospect, Shah Rukh Khan at least had the advantage of knowing that others felt his outrage with him, for him. 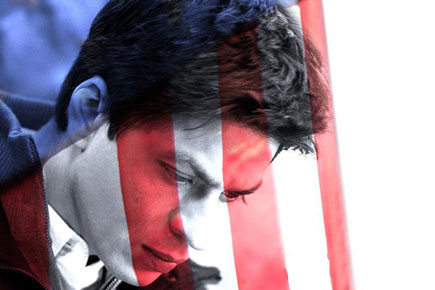 The obvious perils and curious privileges of being a Muslim in a post-9/11 world. And, oh, it actually helps if your name is Khan.


The obvious perils and curious privileges of being a Muslim in a post-9/11 world. And, oh, it actually helps if your name is Khan.

Shah Rukh Khan, as the world and its aunt are no doubt aware, was recently held for questioning at Newark airport on the basis of his surname, identifying him as Muslim. This led to Priyanka Chopra, renowned intellectual and political polemicist, who moonlights as a crappy actress, declaiming on Twitter: “It’s such behaviour that fuels hatred and racism. SRK’s a world figure for God’s sake. Get real.” Er, no Priyanka, you get real. Every day, Muslims are picked out of queues at airports, regardless of their social standing, their profession or their intent. This is done on the basis of racial profiling, a process several other Muslims, deeply uncomfortably albeit, tolerate as a justifiable prejudice (this, in spite of the fact that airport staff almost always gets it comically wrong). Chopra’s objection wasn’t to racial profiling, her big problem was that American customs officials weren’t aware of Kuch Kuch Hota Hai.

Unlike the majority of Muslims for whom travelling has become an intimidating prospect, Khan at least had the advantage of knowing that others felt his outrage with him, for him. Victims of discrimination have found a yardstick, “if it can happen to SRK, then…” If I were he, taking one for the team in a post 9/11 world, I’d go the Queen Mother route. When the Luftwaffe hit Buckingham Palace during the Blitz, she famously said, referring to the heavy bombing of London’s poor neighbourhoods: “Good, at least now I can look the East End in the eye.”

Here in Pakistan, we’re by and large pretty stoic about security searches, producing identification and the high chance of airport security personnel getting their jollies by copping a quick feel (not to mention the out-and-out apartheid inflicted on Pakistani passport holders at Indian airports). The big difference, of course, is that it happens to everyone. Pakistan’s is a fascinating conflict, where we are both the Germans and the Allies. Terrorism on the sort of scale we experience here is, if nothing else, the most egalitarian form of violence there is. No more mindlessly dispatching generations of cannon-fodder to the trenches. This war is home delivery, brought to your doorstep; and your marketplaces, your mosques and your five-star hotels.

You’d think that with all this chaos, there’d be some real intellectual growth, some insight from within the eye of the storm. While there has been some impressive new writing from and about Pakistan recently (and inevitably some frightfully bad writing too, given that one in every five people at an average dinner party is allegedly writing a novel), there isn’t as thoughtful a response to the crisis as one would hope. Being Pakistani, living in Pakistan, having a Pakistani parent or knowing somebody Pakistani who lives across the road from your second cousin’s best friend has become, sadly, a unique selling point unto itself, providing the launch pad for some dreadful forays into print and broadcasting that the world was surely richer without. You see, along with discrimination, a form of ghastly, patronising global Affirmative Action is afoot. We have become creatures of fascination, and some of us are milking it for all its worth.

Being ludicrously pale (I’ve been mistaken for everything from Israeli to French to dead, depending on how much sun I’ve had), I’m accustomed abroad to the inevitable “but you don’t look Pakistani”, delivered in the tone generally reserved for the sentence “I didn’t know you have dandruff”. But attitudes are changing. Now I can dine out on my nationality, and not only in the West, where people are expected to not know very much, but also in my own neighbourhood. I’ve found myself received as a novelty figure in India (“Really? You can live on your own in Pakistan? But isn’t that a problem?”), where really you’d think they’d know better. But back to what I was saying, get this, along with every other self-promoter in the business, I’m producing a book. Naturellement. I have an agent, a pleasant offer from a respectable UK publishing house, and various people keen to write about it. What I don’t have as yet is a completed manuscript. The way things are going, I can quite possibly dash one off over a free weekend and sell it as is. Publishers are under the impression that they can get more bang for their buck here. Few people are going to resist the lure of cashing in on their moment in the sun. It’s hugely unfair, but nice work if you can get it. Oh, and it helps if your name is Khan.