Not since Nehru has the country had a male leader who enjoys being the cynosure of all eyes. Anatomy of a fashion statement 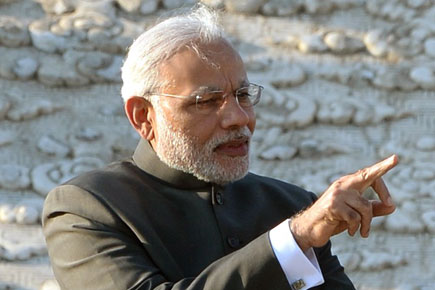 When Narendra Modi was a lad in Gujarat in the impoverished, tea- stall phase of his life, he can hardly have imagined that he would one day stride on the Mongolian steppe dressed in a deel— the traditional robe for Mongol men—with a fedora perched on his head. As burly Mongolian men clamoured around him bearing gifts, one wouldn’t have been surprised if he’d said to himself, ‘You’ve come a long way, baby.’ (Plausible Gujarati for that phrase would be, a friend tells me, ‘Tu ghano door avi gayo chhe, beta.’)

Let no one say that Modi doesn’t have style. In truth, no one does say that. If there’s one thing that notoriously argumentative Indians can agree about, it is that the man has it. Where we disagree, however, is in conferring on it our approval. Here the country parts along class lines, with cosmopolitan elites sniffing that the man is naff, over the top, and vulgar—a sartorial khichdi that makes them cringe—while the ordinary Indian cheers him on from the sidelines. There is something very filmi about Modi’s dress sense; and when he wears tweed jackets on his trips abroad—such as the one he had on when he met Jong-Kyun Shin, president of Samsung, in Seoul recently—he reminds us all of the hill station genre of Bollywood films from the 1960s and 70s, when men wore clothes that they couldn’t possibly have worn in the sweltering summer of Delhi. (Think Rajesh Khanna in Aradhana, though Jong-Kyun Shin isn’t a patch on Sharmila Tagore.)

There is something undeniably aspirational about Modi’s wardrobe, whose full range is revealed most often on state visits to foreign lands. It’s as if he’s making up for a lifetime of having dressed as a drab Indian politician: kurtas are all very well and comfortable, but they can get monotonous. And let us not forget that Modi’s vestiary CV includes khaki shorts— starched and flared and an offense to fashion, what Wodehouse would have called ‘very rum raiment’. The psychic scars of shakha-wear must run deep in a man of his obvious vanity.

Oh, the vanity. Yes, I know: That Suit. There will not be a single obituary, when the day comes—and we wish our dear leader a very long life—that will not make reference to it. Modi will never be allowed to forget that moment of stylistic madness. But the man’s vanity is, in many ways, refreshing: How bracing it is to have an Indian leader who struts, who is on display, who keeps the paparazzi agog and fashion writers in business. Not since Nehru have we had a male leader who enjoys being the cynosure of all eyes.

Nehru’s style couldn’t have been more different: restrained, he cut a dash at the margins: a rose here, a pocket square there. Unlike Modi, whose stocky frame did not look out of place among Mongolians, Nehru was slim, and boyish- framed to the end. After him came a long and tedious run of heartland netas, whose dress sense was just as insular and predictable as their politics. Dowdiness became the badge of India’s politicians. So much so that we’ve been treated to the astonishing irony of Rahul Gandhi, the great-grandson of Nehru—dandy, impeccable, elegant Nehru—berating Modi for his ‘suit-boot ki sarkar’. When the scion of India’s oldest political dynasty berates a lower-middle-class prime minister for elitism, you know you’re in an Indian Wonderland. One cannot help thinking that Rahul Gandhi regards Modi as a lower- class upstart for whom suits (and laced, leather footwear) are socially inappropriate.

Part of Modi’s style, it should be said, lies in the muted menace he conveys. There is a precisely calibrated theatricality about the man which suggests that he is in complete control— inscrutable, imperturbable, indifferent to those around him. His visit to the terracotta warriors of Xian was a Modi masterclass. Alone among the ranks of ancient statuary, he stood rock-still, his dark glasses denying us any access to his emotions. In his dress, he was impeccably Indian, the starched white of his kurta and churidar an elegant contrast to the beige of the Chinese warriors, the paisley pashmina shawl draped over his left shoulder giving him an almost military stiffness. There are countless photos of him standing toe-to-toe with the Chinese warriors of yore. The message was clear: I am not your typical Indian pussycat politician. Main dada hoon, bhai.

Modi did something in China that no man before him has achieved: he turned the Chinese vegetarian. The state banquet in Shanghai must have made his hosts sore. Wherever Modi goes, the banquets are vegetarian. Perhaps this is at the request of Indian officials, but I doubt it. India’s Ministry of External Affairs is too sophisticated to seek to impose alien dietary rules on others. It is almost certainly the case that his hosts are opting to tread cautiously with Modi, making sure that he is given no offence. Even the Mongolians, who give their babies chunks of sheep fat to suck on as they drink their mother’s milk, put on a veggie repast for Modi. Who goes to Mongolia to eat ‘Steamed Apple’? ‘Carrot and Orange Cream Soup’? Modi does.

Except in matters of the plate, the man is venturesome, and this is what is most striking about Modi in the minds of his foreign interlocutors. He is unafraid of crowds, unafraid of open talk. He tweets, takes selfies—most recently one with Li Keqiang, China’s premier, which must have made Mao spin in his grave—and gives frank lectures to college students. One wishes that he were as accessible while in India as he is when he travels abroad. In his own land, he is always aloof. That, too, is part of his style. But it is a part that he needs to reconsider.

He can keep the dark glasses on, of course.