Modi Is in Search of a Storyteller, Still 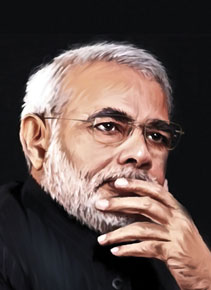 We all know that nobody has succeeded as much as Narendra Modi did in telling the story of Narendra Modi So Far—a life stretching from a tea stall on a railway platform to an RSS shakha to the party offices of BJP to the Chief Minister’s residence in Gandhinagar to 7 Race Course Road in New Delhi, with a few folklorish set pieces in between such as a schoolboy swimming through a crocodile-infested pond, the boy being told by a village astrologer that he would be driving around in a big car in a big city, and the young mendicant travelling across India, discovering the nation as well as himself. We also know that Candidate Modi in action was nothing but Storyteller Modi, his every stump performance a story about a nation ransacked by a venal cabal in Delhi, about a future free of the party that plundered India, and about a Great Tomorrow in which he will be lording over the dreams of the young—he, as narrator-protagonist, was the harvester of resentment and the retail merchant of hope. He didn’t need the biographer, the op-ed pundit or the cover story writer, because, invariably, they all wanted to tell his story with an exaggerated sense of morality, in which words such as ‘riots’ and ‘polarisation’ figured as if his past was a negation of the future he was marketing. So the storyteller became his own mythmaker, his own iconographer, his own Michelangelo and his own Boswell, his own Machiavelli and his own McCarthy, and the mythology was brought to the people in 140 characters, almost every 140 seconds, or through multiple holographic images of himself across India. What he couldn’t actually get to do was write books that could sit along with titles like Dreams from My Father and The Audacity of Hope. What a pity.

As Prime Minister Modi became an inevitability even before the summer of 2014, there were indeed some attempts to capture the man and his mind, but they were mostly overstretched journalism. And so were the quickies that came out after his victory. Here comes one more, written by an English journalist who was also a spin doctor to Tony Blair. The Modi Effect: Inside Narendra Modi’s Campaign to Transform India (Hachette, 342 pages, Rs 599) is written, as the author Lance Price says at the outset, for the international reader, and Modi was keen that his story reached the world where his holograms could not reach. Price was given full access to Modi the candidate as well as the Prime Minister, and he also gave the Englishman, a left-liberal by his own admission, his word that he would not mind whatever Price wrote (“You can criticize me as much as you want.”) Price was the chosen scribe to spread the legend of Modi to the English-speaking world. And Price knew—it was obvious by the time you turned the last page—that here was a man whose passions and ambition carried within them the conflicting imageries of Oriental kitsch and democratic fervour, the possibilities of technology and the power of personality, modernity and religiosity, of propaganda and proselytisation. This book is written with a sense of wonderment, and at times, in spite of the author’s initial position that he would not have voted for Modi if he were an Indian, the book is part appreciation, part defence, and part Modi for Dummies—but the style never loses its lucidity.

The rewards are incremental. We get flashes of the Modi mind. The Modi who sought international attention: “The global population should know how we smoothly and effectively managed the world’s largest election process and also how effectively we have evolved the election process since 1952.” Modi shielded by God: “I have never worn a bullet-proof jacket.” Modi the eternal stranger: “I am an outsider, quite isolated from the elite class of this place.” Modi the democrat : “I was lucky to work with Islamic organisations, with liberal organisations— so many people. That period was a good period to mould me. Because of that and the democratic values that I found, it became part of my DNA. Yes, that was one of the best experiences that I had. I became aware; I understood the constitution, I understood the rights, because before that I was living in a different world.” His cultivated sense of detachment: “It was Mr Rajnath Singh who called me and first broke the news (about being made the prime ministerial candidate). It was not a surprise. Since my win in the state elections in Gujarat in 2012, I was clear that I would be one of the candidates under consideration. But I never really thought about it or ever tried to lobby within the party to be nominated as the prime ministerial candidate. Nor was I really curious as to whether I or someone else would be nominated.” Modi the great believer in Indian democracy: “The DNA of democracy is ingrained in the Indian people and you can never separate it out even from the most illiterate of the citizens. Never assume that just because someone is illiterate they do not understand democracy, and ultimately this is what makes India.”

Candidate Modi played with the raw emotions of Indian democracy, and for a political junkie like Price, now given a front-row seat, it was a show, in its size and sweep, that would boggle the mind of any outsider. Apart from a sprinkling of Modi’s thoughts (without the sparkle of his trademark soundbites), the book is about the making and the marketing of Modi. Talking to party insiders and hired professionals, volunteers and other believers in the Modi revolution, journalists on the Modi beat and academics (only Amit Shah proved to be elusive), Price gives yesterday’s patchy stories a narrative afterlife. So we get a fairly good account of the ‘ecosystem’ Team Modi created as the Candidate began his campaign for the mind of India. The message, the marketing, the machine—all come alive, and all revolve around a politician so sure of his worth in the marketplace of slogans. He realised the power of social media and the novelty of hologram technology, and used them to maximum effect in achieving what the traditional media had denied him. He created his own world, and ensured that he would read in the morning paper what he wanted to read about himself, and he would see on television the Modi he loved to see after a good day’s campaigning. Price has captured the atmospherics, gone behind the curtain, made the phenomenon accessible, and delivered his judgment: ‘The most successful politicians are those who keep their eyes fixed firmly on the future, and that is exactly what Modi has always done. He could now go forward confident that the outside world was willing him to succeed and that, as long as he kept to his promise to govern for all Indians, he would be judged henceforward on what he achieved in office and no longer on events in the past.’

In the end, Modi here is a spectacle packaged in superlatives and exclamations. It is just the shell, the physicality of the phenomenon. When journalism grapples with history in the immediate glow of the Event, what we usually experience is the breathlessness of the journalist rather than the mind and meaning of the subject. Modi, still, lies elsewhere, abandoned, beyond the notepads of the instant chronicler. Before historians take over, he is worthy of a David Remnick or a David Maraniss, brilliant journalist-biographers of Obama, whose first campaign for the White House was an inspiration for Modi. The man who became the most captivating idea of the Right in this part of the world deserves the scrutiny of scholarship—and the gaze of the historian. In his story merges the larger narrative of a country whose life in democracy continues to bring out the possibilities as well as perversions of freedom. The story remains untold.