Modi in UK: Illusions of a Vanished Past

It’s a fallacy to imagine that being the first prime minister to be born after Independence, Modi is immune to the magic of the British Raj 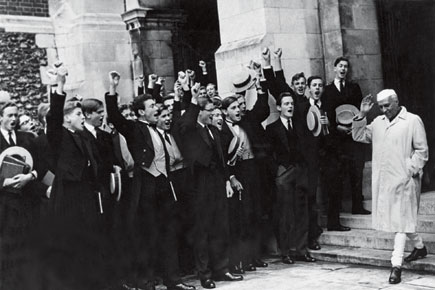 Jawaharlal Nehru would have been horrified. He complained bitterly to his sister Vijayalakshmi Pandit about American insensitivity when Harry S Truman showered Pakistan’s visiting prime minister, Liaquat Ali Khan, with exactly the same honours with which Nehru had been received in the US only a few weeks earlier. Now, here was David Cameron, Britain’s prime minister, laying out red carpets that Nehru had never set eyes on for Narendra Modi.

Nehru wasn’t asked to address even one house of the British parliament, leave alone both, and in the Royal Gallery at that. Nehru spent his free nights at Broadlands, the Mountbatten home, since Chequers, the prime minister’s 16th century official country house where Modi slept, was closed to him. There were no ceremonial guards, RAF flypasts or buildings bathed in the saffron, white and green that Nehru had chosen for India’s national colours. Nor was there a tête-à-tête lunch with the British monarch for the man who turned down Clement Attlee’s hint of a title “from India’s heroic age” instead of the prosaic ‘Head of the Commonwealth’ for her father, King George VI.

Clearly, Britain is no longer what it used to be. As Nirad C Chaudhuri remarked sourly when Amartya Sen became Master of Trinity College, Cambridge, the English ceased to be English when they lost their prejudices. Nehru knew both countries well enough to realise that however heady those three days may have been for Modi and Cameron, they chased illusions of a vanished past. Of course, the visit was successful at a personal level. But country to country relations are another matter. Senior commercial officers at the two high commissions in Delhi and London could’ve ratcheted up the trade and investment deals without prime ministerial intervention. As for the announcement that 2017 will be the UK-India Year of Culture, it was as redundant as the generosity with which Goh Chok Tong, then Singapore’s prime minister, once offered to introduce the British to Bangalore, the former army cantonment from where British officials kept a watchful eye on the Maharaja of Mysore.

In terms of Indo-British relations, the expensive and elaborate hospitality was like reinventing the wheel all over again. As only Manmohan Singh had the courage to admit, if Britain’s distant and generally unacknowledged legacy is removed, India will be left without its law courts, civil service, parliamentary democracy, armed forces, media and almost all the other appurtenances of modern statehood.

It’s a fallacy to imagine that being the first Indian Prime Minister to be born after Independence, Modi is hostile—or even immune—to the magic of the British Raj. Indians who knew the British saw them as warts and all. The post-Independence generation worships a remote ideal of which it has no direct experience. No wonder the Duke of Bedford observed that living in a British way became more popular in India two decades after Independence than it had ever been when the British ruled the land. China’s Xi Jinping doesn’t need to break into English to impress anyone or prove himself; an Indian leader who cannot do so feels deeply handicapped.

As if to confirm that the new generation is trying heroically to make up for what it missed, Indian wines made an impressive appearance on London’s supermarket shelves to coincide with the Prime Minister’s visit. He may not touch a drop, but let it not be supposed he is a dehati with no knowledge of the sahib’s tipple. His sophistication peeps out in many small leaks. One was his choice of gifts for the 89-year-old Queen Elizabeth. He didn’t burden Her Majesty with a large and useless sandalwood replica of the Taj Mahal as Rajendra Prasad did when she toured India in the winter of 1961. Instead, he—or, rather, his shrewd team of advisers—showed how au fait they were with current Western taste by presenting organic honey and Darjeeling tea, while displaying their aesthetic sense with a gift of woven Tanchoi silk scarves.

The pièce de résistance was a collection of photographs of the Queen’s historic and controversial 1961 visit. It was historic because it was in effect the last Royal Durbar. It was controversial because many MPs, not excluding Nehru, complained it was over the top. That was when to the horror of republicans like Nehru, Jaipur rang with delirious cries of “Maharani ki jai!” (for Her Highness Maharani Gayatri Devi who in her role of elected politician boasted the world’s biggest majority) and “Malika Maharani ki jai!” for the woman who might have been Empress of India like her great-great-grandmother Queen Victoria. Recalling the connection, the AIR commentator covering the Queen’s ride in an open car from Dum Dum airport quoted a Yorkshire Post editorial that she might no longer be empress of India but the enthusiasm of Indian crowds proved she was still empress of millions of Indian hearts. The visit provoked controversy even in Britain. After the famous Jaipur tiger shoot, Prince Philip was forced to brandish a bandaged finger to avoid slaughtering any more beasts.

The point is that the Indo-British connection is too deeply entrenched in Indian life and institutions to need any tinkering. Every time one posts a letter in Cuddalore, one is taking advantage of Rowland Hill’s penny post. Every time one boards a train in Bhubaneswar, one is acknowledging James Watts’ invention even though steam has given way to diesel and electricity. Britain’s 1.5 million people of Indian origin, 10 ethnic Indian MPs and 24 life peers, and the Hinduja and Mittal families which are two of the 10 richest in the country, are also dynamic testament to the connection. As Lord Bilimoria, head of the UK-India Business Council, pointed out, 700 Indian companies in Britain have created 100,000 jobs. In Cameron’s words, they will put the ‘Great’ back into Britain. As if to underline the importance of Tata’s steel and car manufacturing companies, Modi drove to Buckingham Palace in a Jaguar Land Rover.

Yet, the relationship seems stagnant when viewed from the British end. That’s because modern opinion makers see history as a dead asset. The past yields no dividend. Britons who have never heard of Lord Curzon aren’t thrilled to learn that his family seat in Derbyshire, Keddleston Manor, was the original of Calcutta’s Raj Bhavan. They are chagrined that bilateral trade, which amounts to $18 billion, is only 2 per cent of the total. They reckon that with the Chinese economy slowing down, India must be the world’s fastest growing economy. Cameron will support India’s UN Security Council ambition in return for supplying investment funds and technological expertise, satisfying the Indian yearning for consumer goods and demand for improved infrastructure, to say nothing of propping up Modi’s digital and smart city ambitions. But, as I said, trade and investment deals between two governments do not demand the razzmatazz of what was very like a head of state visit. The more substantive economic gains Britain expects must wait until the Modi Government can enact new land and labour laws and provide an efficient bureaucracy free of corruption. That is also what businessmen in Singapore and Washington are waiting for. “The government has done its best, but, frankly, it has not been reciprocated,” regrets Lord Mandelson, the Labour Party dignitary.

The dividend was entirely personal. No Indian need be told how gratifying it must all have been for a man who publicly boasts he calls the American president by his first name and that he and “Barack” are fast friends who laugh and joke together. Perhaps in time we will also learn of his relations with “Elizabeth”. During one of Jyoti Basu’s periodic visits to London, Siddhartha Shankar Ray had a public meeting in stitches with the old nursery rhyme ‘Pussy cat, pussy cat, where have you been? I’ve been to London to visit the Queen./ Pussy cat, pussy, what did you there?/ I frightened a little mouse under the chair.’ We don’t know about the mouse, but it was noted that while Cameron, one of the first world leaders to congratulate him on his election, had already paid three visits to India, taking with him on one occasion “the largest UK trade delegation in living memory”, Modi visited 28 other countries before deigning to visit Britain. Perhaps this was to punish London for denying him a visa for 10 years although Modi did say gamely that he was never barred from visiting. “I could not come here because of my time constraints.” Some British commentators pointed out churlishly that he might’ve had to face an international arrest warrant in those days.

For Cameron, too, it was a personal triumph. He provided the warm-up act for the highlight of the visit—the massive Wembley Stadium reception hosted by the Chandigarh-born billionaire tycoon Nat Puri, which was a celebration of the Indian diaspora. He may also have helped to drive a wedge between British Indians and their traditional patrons in the Labour Party. As immigrants become richer and move right, memories of Attlee, the Fabian Society and of Nehru’s Labour associations are fading. “Indians like being stroked,” a former American ambassador once said, and Cameron stroked the Wembley crowd for all he was worth.

Nehru wouldn’t have been alone in his disapproval. The Victorian Marquess of Salisbury would have been equally aghast. He warned when Dadabhoy Naoroji put up for parliament in 1892 that British voters would never accept “a black man” as their representative. Queen Victoria was not amused. People muttered Naoroji was paler than Salisbury, and Finsbury Central voters gave him a majority. Just as well the noble marquess didn’t live to see the day when a British prime minister, a Tory to boot, would stand up and woo Indians in Hindi. What would Margaret Thatcher have said to hear Cameron promising that “acche din” are not just “aaney wale hai” but “zaroor ayenga”? For whom, some might wonder. But not Mrs T. When Australia’s Malcolm Fraser and Chief Emeka Anyaoku both sought the Commonwealth secretary-general’s job, she is believed to have muttered that of the two “niggers”, she preferred the Black. Such stark black and white choices are a thing of the past. It was to rapturous applause (actually, more than 60,000 people packed into the Wembley Stadium received everything he said with rapturous applause) that Cameron prophesied it “won’t be long” before a British Indian prime minister takes up residence in 10 Downing Street.

Will the likes of Modi still find London worth visiting then? Or will Britain have become another Mauritius or Fiji? Meanwhile, India looks forward to welcoming the Duke of Cambridge, second in line to Queen Elizabeth’s throne, and his duchess next year.

Read: Modi Makes a Decisive Move in the UK by Harsh V Pant